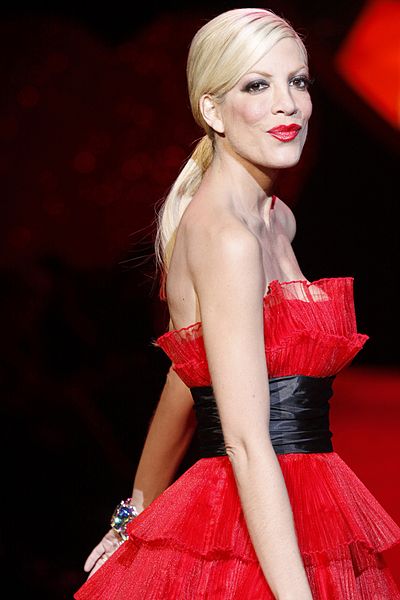 Spelling's autobiography, Stori Telling, debuted on top of the New York Times Best Seller list and was named the best celebrity autobiography of 2009.[4]

Spelling was born in Los Angeles, California. She is the daughter of Candy (née Marer; born 1945) and television and film producer Aaron Spelling (1923-2006).[5] She has a younger brother, Randy, a former actor who as of 2009[update] works as a life coach. Spelling's parents were from Jewish families whose ancestors moved to the United States from Russia and Poland.[5][6] Her middle name comes from her paternal grandfather, David. She attended Beverly Hills High School in Beverly Hills, California, and graduated from Harvard-Westlake School[7] in 1991.
Read more...

At age six, Spelling was given acting lessons from an acting coach hired by her father, and was subsequently given guest spots on television series such as The Love Boat, T. J. Hooker, Hotel, Fantasy Island, Vega$ and Saved by the Bell. At the age of 17, she was given the role of Donna Martin on Beverly Hills, 90210, co-produced by Aaron Spelling's company Spelling Television. Tori Spelling portrayed Donna for the show's entire run and was nominated for two Young Artist Awards.[8][9]

In 2006, Spelling starred as herself in the VH1 sitcom So Notorious, which parodied her public image. In January 2007, she and her second husband Dean McDermott pretended to purchase and operate a bed and breakfast hotel, Chateau La Rue in Fallbrook, California[12] for their reality series, Tori & Dean: Inn Love (later Tori & Dean: Home Sweet Hollywood), which aired on Oxygen from 2007 to 2012. In July 2007, Spelling became a minister to marry a gay couple at Chateau La Rue. A tape of the wedding ceremony was shown on Inn Love.[13]

Spelling's fashion and jewelry line premiered on HSN.[when?] She released her autobiography, sTori TELLING, on March 11, 2008. Her second book, Mommywood, was released on April 14, 2009.[14]

In 2010, Spelling released her third book, uncharted terriTORI. Spelling told People: "I love sharing my stories and experiences with people and connecting to them on both a humorous and emotional level. The response to my first two books has been so amazing that I wanted to write a third one for my fans."[16]

Home Sweet Hollywood's spin-off series, Tori & Dean: sTORIbook Weddings premiered on April 6, 2011.[17] Writers, who claimed they came up with the idea of a similar series starring Spelling and husband Dean McDermott, filed a $60 million lawsuit against the series, citing breach of implied-in-fact contract, breach of fiduciary duty, slander of title, false advertising, and unfair business practices among other charges.[18] Later in 2011, Spelling voiced the Pirate Princess in Jake and the Never Land Pirates. She played a role in the comedy short film Hoarders: Untold sTori which premiered at the Outfest Film Festival in July 2011.[19]

On April 21, 2012, Spelling hosted My Little Pony: Friendship Is Magic 'Royal Wedding' special, celebrating the series' second-season finale, called A Canterlot Wedding. She also hosted the series premiere of Craft Wars, where three new contestants each episode battle against each other crafting for a chance to earn $10,000.[21][22]

On December 18, 2012, Spelling appeared on Nick Jr.'s Yo Gabba Gabba! and performed a skit where she baked cookies for the characters on the show. This was part of a Christmas special for the series. The special included other famous guests such as Tony Hawk and My Chemical Romance.[23][24]

It was announced on August 26, 2013, that production had started on a new reality television series titled Tori & Dean: Cabin Fever.[25] The series chronicles Spelling, McDermott, and their four children as they move to a lakeside cabin in Ontario, Canada while renovating it into their vacation home.[25] Eight half-hour episodes were produced and aired on CMT Canada and HGTV in 2014.[25]

In 2016, Spelling voiced April in the animated movie Izzie's Way Home.[27] The same year, she co-starred in the TV movie Mother, May I Sleep with Danger? alongside James Franco.[28]

Since June 24, 2018, Spelling is hosting the TV series The Look All Stars.[29] In the same time, she appears in the successful tv movie The Last Sharknado: It's About Time.[30]

On July 3, 2004, Spelling married actor and writer Charlie Shanian.[31] In July 2005, Spelling was filming the Lifetime TV-movie Mind Over Murder in Ottawa, during which she met actor Dean McDermott, who was then married to actress Mary Jo Eustace. Spelling and McDermott began an affair the night they met,[32] Spelling and Shanian separated in October 2005.[31] Shanian cited irreconcilable differences when he filed for divorce, which was finalized on April 20, 2006.[33]

Spelling was anticipated to inherit a sizable portion of her father's $500 million estate after his death in 2006. The estate was to be divided primarily between Spelling, her brother Randy, and their mother Candy. Candy Spelling was the estate executor, but she and Tori Spelling were estranged. Tori and Randy Spelling each inherited $800,000,[42] although Randy was not estranged from Candy.[42] It was reported that Candy established a $10 million trust fund for Tori's eldest child, Liam.[43]

In her sixth book, Spelling It Like It Is, Spelling admitted to having financial troubles, due to the cancellation of her reality series, poor real estate decisions, and a difficult fourth pregnancy, during which she was hospitalized for ten weeks.[44][45] In explanation, Spelling said, "...as my real estate obsession persists, it's starting to look more compulsive. Moving is expensive, and I've put us in a precarious financial situation."[46]

Spelling is an ordained minister with the Universal Life Church Monastery.[47]

Spelling and Tim Gunn co-presenting at an event in November 2007.

Spelling has written six books. Three were published by Gallery Books, while one was published by Aladdin Books and another published by Simon Spotlight Entertainment.