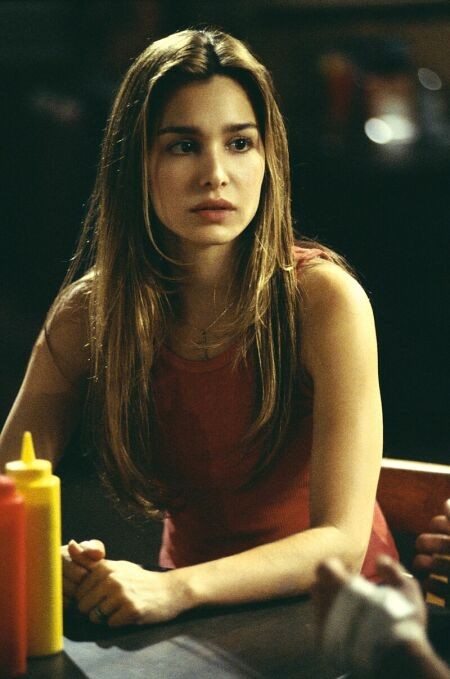 Gina Philips (née Consolo; born May 10, 1970)[1][2] is an American actress. She had recurring roles on David E. Kelley's Ally McBeal, as Sandy Hingle, and Boston Public, as Jenna Miller. She starred as Patricia "Trish" Jenner in the 2001 horror film Jeepers Creepers, and reprised her role in a cameo in Jeepers Creepers 3, released in 2017.

Philips was born in Miami Beach, Florida. She attended the University of Pennsylvania but dropped out halfway through her senior year with only one class away from her degree, in order to pursue acting. However, they allowed her to walk through graduation with the rest of her graduating class since she was only one class shy.[3] Philips is known for her recurring roles on David E. Kelley's Ally McBeal as Sandy Hingle and Boston Public as Jenna Miller. She has also made guest appearances on Star Trek: DS9, Sliders, ER, CSI, Medium and Monk.
Read more...

Philips landed her first supporting film role in Deadly Invasion: The Killer Bee Nightmare. It aired on the Fox Network on March 7, 1995.[4] In 1996, Philips had a small role in Unforgivable as Tammy, the daughter of an abusive father. The film premiered on April 30, 1996, on CBS, and received little to no critical acclaim. In 1997, Philips played her first lead role in Born Into Exile as Holly, a 14-year-old runaway. The film received generally positive reviews.Variety was exceptionally positive[clarification needed] about the film, praising the story, the characters, the cinematography and the acting performances.[5]

In 2001, Philips was cast as a lead in the 2001 horror film Jeepers Creepers. The film received mixed reviews from critics.[6][7] It was a commercial success, taking in $59,217,789 worldwide.[8] In 2003, Philips was originally going to appear again as Trish Jenner in Jeepers Creepers 2, as the plot was about her character and Patricia Belcher's character hunting down The Creeper, while a school bus full of teens terrorized by The Creeper was just a subplot. But as writer and director Victor Salva worked on the script, the bus plot became more interesting. After rewrites, Philips turned down the chance to reprise her role, as the film mainly concentrated on the bus instead.[9] Her next film was the American comedy-drama The Anarchist Cookbook. The film follows a young honors student-turned-anarchist and his group of anarchist friends, living peacefully in a Dallas commune, until a nihilist appears with a copy of The Anarchist Cookbook and completely destroys their way of life. The film was received with generally negative reviews. Review aggregator website Rotten Tomatoes shows a freshness rating of 39%,[10] and Metacritic's average review score is 36 out of 100.[11]

In 2004, she starred in the horror films Dead & Breakfast and Jennifer's Shadow. Dead & Breakfast received mixed reviews. It premiered at The South By Southwest Film Festival and went on to win over a dozen awards and was nominated for a Saturn Award. Rotten Tomatoes, a review aggregator, reports that 50% of 18 surveyed critics gave the film a positive rating; the average rating is 5.8/10.[12] Joshua Siebalt of Dread Central rated it 3.5/5 stars and said that it would become a cult film among horror fans that understand it.[13] Reviewing the film on DVD, Steve Barton, also of Dread Central, rated it 4/5 stars and wrote, "It's clever, witty, and ultra-violent; I couldn't be more pleased."[14] Mac McEntire of DVD Verdict wrote, "Dead and Breakfast is why we love low budget horror movies."[15] Critical reception to Jennifer's Shadow was similar. It was numbered 9 on Complex's The 10 Best Latin American Horror Movies. Complex stated "Directors Daniel de la Vega’s and Pablo Parés’ supernatural collaboration does a fine job of emulating much of that older style of cinema’s dread-filled mood and unsettling undercurrents".[16]

In 2006, Philips again played a lead in a low-budget horror film, Ring Around the Rosie as a young woman plagued by horrible visions and dreams of tragic past events while spending time at her grandparents' secluded summerhouse. The next year she starred in the horror film The Sickhouse and the Lifetime film My Baby Is Missing. The film was released as a DVD under the title Stolen Innocence on 7 January 2010.[17]

In 2011, she began work on the Jennifer Lynch film Chained (previously titled Rabbit)' a Canadian psychological thriller in which a serial killer kidnaps and adopts a young boy, eventually turning him into his protege. The film was shot in Regina, Saskatchewan, over a period of 15 days.[18] It had its world premiere at the Fantasia Festival on 5 August 2012.[19]

She appeared in the third Jeepers Creepers film, Jeepers Creepers 3. Her involvement is a cameo, setting up future installments. Shooting began in Louisiana in February 2017, and the film was released in September of that year.[20]