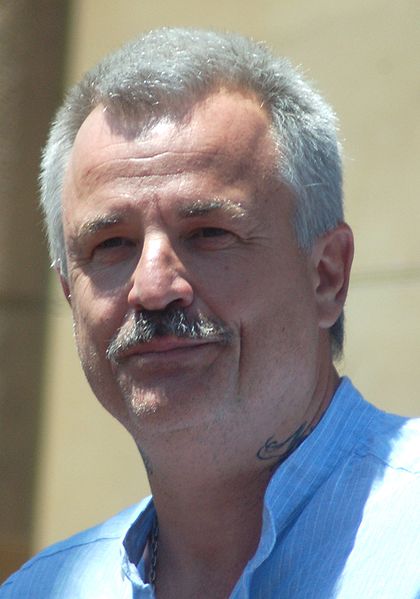 Nicholas David Rowland Cassavetes (born May 21, 1959)[2] is an American director, writer and actor.

Cassavetes was born in New York City,[3] the son of actress Gena Rowlands and Greek-American actor and film director John Cassavetes.[2] As a child, he appeared in two of his father's films: Husbands (1970) and A Woman Under the Influence (1974). After spending so much of his youth surrounded by the film industry, Cassavetes initially decided he did not want to go into the field. He instead attended Syracuse University on a basketball scholarship. His athletic career was effectively ended by an injury, and he decided to rethink his aspirations, ultimately deciding to attend his parents' alma mater, the American Academy of Dramatic Arts in New York.[4]

He has appeared in the films Face/Off, The Wraith, Life, Class of 1999 II: The Substitute, Backstreet Dreams and The Astronaut's Wife, among others.[2] He has directed several films, including John Q, Alpha Dog, She's So Lovely, Unhook the Stars, The Notebook, and My Sister's Keeper.[2] He also adapted the screenplay for Blow[4] and wrote the dialogue for the Justin Timberlake music video "What Goes Around... Comes Around".[5]

He also has played himself in the season 7 opener of Entourage on HBO and Tattoo Joe as a cameo in The Hangover: Part II, replacing Liam Neeson from the cast due to scheduling conflicts.[8]

In 1985, Cassavetes married Isabelle Rafalovich.[citation needed] They had two daughters together, Virginia Sara (born 1986) and Sasha (born 1988),[citation needed] before divorcing. He then married Heather "Queenie" Wahlquist,[1] who has appeared in several of his films, including a small role in The Notebook as Sara, a secondary character and best friend to the female lead Allie Hamilton, portrayed by Rachel McAdams.[9] Cassavetes's own mother, Gena Rowlands, appears as the older, married Allie (Hamilton) Calhoun.

In April 2018, Cassavetes became engaged to his long term girlfriend, Christina Virzi. Virzi who was born in Las Vegas on Jan 25th in 1983 works as a model and hair and make-up artist.

Sasha was born with a heart defect and underwent substantial surgery; Cassavetes' film John Q. was dedicated to Sasha, and his later adaptation of My Sister's Keeper was based in part on Sasha's medical experience.[10]

Report a problem
Write to Nick Cassavetes at FanPal • 2022