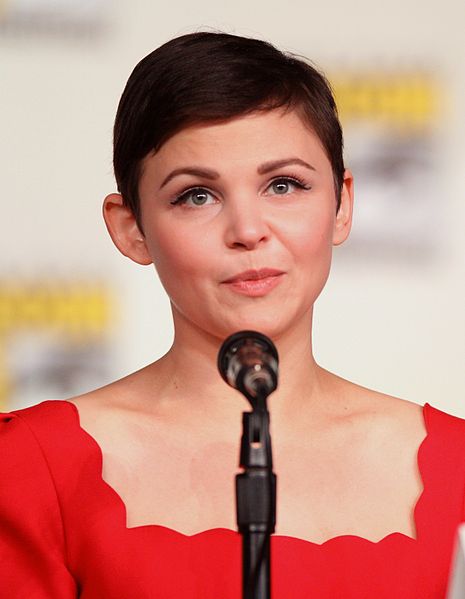 Jennifer Michelle "Ginnifer" Goodwin[1] (born May 22, 1978)[2] is an American actress. She is known for playing Margene Heffman in the drama series Big Love (2006-2011), Snow White/Mary Margaret Blanchard in the fantasy series Once Upon a Time (2011-2017, 2018), and Judy Hopps in the Disney animated film Zootopia. She also played Fawn in the Disney film Tinker Bell and the Legend of the Neverbeast. Goodwin has also appeared in various films including Mona Lisa Smile, Something Borrowed, Walk the Line, Killing Kennedy, He's Just Not That Into You, and Ramona and Beezus.

Goodwin was born in Memphis, Tennessee.[3] Her mother, Linda (née Kantor), is a former educator and stay-at-home mom who later worked for FedEx and Apple.[4] Her father, Tim Goodwin, formerly owned and operated a recording studio.[5] Goodwin changed her name from "Jennifer" to "Ginnifer" to distinguish her name, and to assist in pronunciation of her name in her regional dialect.[6] Her younger sister, Melissa Goodwin, is a stop motion animator on shows such as Robot Chicken, on which Ginnifer has also appeared as voice talent.

Ginnifer's mother is of Ashkenazi Jewish ancestry.[7] Goodwin was raised attending synagogue on Saturdays and Unitarian church on Sundays.[5][8] She was both baptized and had a Bat Mitzvah service.[9][10] In her youth, Goodwin was affiliated with the North American Federation of Temple Youth, and was active in BBYO at the Jewish Community Center in Memphis.[11] She went to school at St. Mary's Episcopal School in Memphis, Tennessee. She then graduated from Lausanne Collegiate School in 1996, then attended Hanover College (majoring in Theater) for one year before moving on to earn her Bachelor of Fine Arts from Boston University. While a student at BU, she performed in numerous student short films, as well as several college and local stage productions. Goodwin was given the "Excellence in Acting: Professional Promise Award" by the Bette Davis Foundation, and graduated with honors. After her time at Boston University, she studied in England at Stratford Upon-Avon’s Shakespeare Institute, in conjunction with the Royal Shakespeare Company. The following year she earned an "Acting Shakespeare Certificate" at London’s Royal Academy of Dramatic Art.[citation needed]

Goodwin first had roles in the NBC television programs Law & Order and Ed before appearing in the Comedy Central television movie Porn 'n Chicken. She later had substantial roles in the films Mona Lisa Smile, Win a Date with Tad Hamilton!, Walk the Line—in which she portrayed Vivian Liberto, Johnny Cash's first wife—and Birds of America. She also played Dori Dumchovic in the dark comedy Love Comes to the Executioner.[12] Goodwin played a leading role as Margene Heffman, the third wife in a polygamous family, on the HBO original series Big Love, which concluded on March 20, 2011. Goodwin has recurring voice roles in the Adult Swim show Robot Chicken, in the animation of which her younger sister Melissa Goodwin is involved.

In 2008, Max Mara honored Goodwin with a "Face of the Future" award, an award recognizing up and coming women in film.[13]

Goodwin played Gigi in He's Just Not That into You, which was released in February 2009. For this role, she received a nomination for the People's Choice Award for Breakout Movie Actress.[14] In April 2009 she began filming Ramona and Beezus (playing "Aunt Bea").[15]

From 2011 to 2017, Goodwin played a leading role in the ABC fantasy drama series Once Upon a Time. She played both the fairy tale heroine Snow White and her real world counterpart, schoolteacher Mary Margaret Blanchard.[16] Goodwin and husband Josh Dallas exited the show at the end of its sixth season to move back to Los Angeles with their family.[17] She and Dallas returned to the series for its series finale at the end of the seventh season.[18]

Goodwin voiced Judy Hopps, the protagonist rabbit police officer in Disney's Zootopia as well as Fawn in Disney's animated film Tinker Bell and the Legend of the Neverbeast. [19] She also voiced Gwen, a kitchen maid who wants to be an inventor, in the animated series Sofia The First.

In March 2018, it was announced that Goodwin had been cast in the ABC comedy pilot Steps.[22] The show was not picked up to series.[23] However, in June, cast options were extended [24]

In 2013, Goodwin stated that after leaving Memphis, she "...up and left Judaism for a very long time," and that, "For 10 years, there was nothing. No ritual. No tradition. No community." She later reconnected with her faith, and has said, "I was a Jew by birth, and now I'm a Jew by choice."[8]