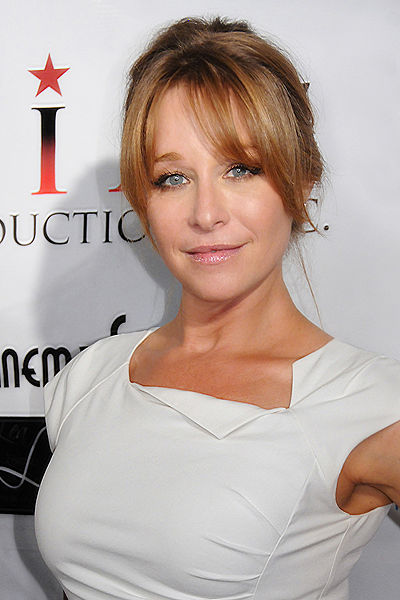 Jamie Michelle Luner (born May 12, 1971) is an American actress who first came to prominence on the ABC sitcom Just the Ten of Us, but is perhaps better known for her role as Lexi Sterling on Melrose Place. She also starred on television as Rachel Burke in the final season of Profiler. Luner portrayed Liza Colby on the ABC soap opera All My Children from April 2009 until its final episode on September 23, 2011. Luner is also well known for her lead roles in many Lifetime movies.[1]

After guest starring in several episodes of the sitcom Growing Pains, Luner went on to star as sexy yet scatterbrained Cindy Lubbock in the Growing Pains spinoff, Just the Ten of Us (1988-1990), which also starred Heather Langenkamp, Brooke Theiss and JoAnn Willette as Luner's fictional sisters. At one point in the show, the foursome comprised a fictional singing group, "The Lubbock Babes". To date, Luner is the only one of the four who has not appeared in a Nightmare On Elm Street movie. Luner also guest starred in a Halloween-themed episode of Growing Pains in which she portrayed a vanishing hitchhiker. After Just the Ten of Us ended, Luner took a break from acting and attended the Epicurian Cooking School, eventually becoming a chef at a popular Los Angeles, California restaurant.[2]

Luner returned to television, playing a troubled teenager, in 1993 in the television movie, Moment of Truth: Why My Daughter?, starring opposite Linda Gray. Luner followed this up with a succession of television movies, most notably Confessions of a Sorority Girl (1994), which began her extended professional association with producer Aaron Spelling.[citation needed]

Luner's next big break came in 1996, when she was cast as scheming vixen Peyton Richards in Spelling's prime-time soap opera, Savannah (1996-1997). Later in 1997, Luner was cast in Spelling's Melrose Place, playing the role of scheming Lexi Sterling until the series' conclusion in 1999.[3]

In 1999, immediately following the cancellation of Melrose Place, Luner was cast as Rachel Burke, Ally Walker's replacement in NBC's Profiler. She played the role until the show was cancelled at the end of its fourth season in 2000.[3] Following the cancellation of Profiler, Luner continued to work steadily, with guest appearances on several television series including The Outer Limits, CSI: Miami and a three-episode arc on That's Life. In 2000, Luner also starred in the independent feature Sacrifice, along with Michael Madsen.

In 2003, Luner joined the cast of another Spelling drama, playing the role of Senior Deputy Ryan Layne in 10-8: Officers on Duty (2003-2004). The series was cancelled after Luner had appeared in just five episodes. Also in 2003, Luner starred opposite Nicholas Lea in the Sci Fi Channel original movie Threshold, and in 2004 guest-starred in an episode of NCIS, called "Dead Man Talking."

In 2007, Luner appeared as Susan in the comedy Black and Bluestein at The Santa Monica Playhouse. Also that year, Luner starred in Nuclear Hurricane, a Sci Fi Channel original movie, and made a guest appearance on CSI: Crime Scene Investigation.[citation needed]

In April 2009, Luner joined the cast of All My Children as Liza Colby.[4] (Marcy Walker, who originally played Liza, had retired from show business several years earlier.) The soap was cancelled in 2011, after which Luner starred in the Lifetime movies Walking the Halls, Stalked at 17 and The Perfect Boss. She then guest-starred in both Supernatural and Criminal Minds in 2013.[5] In 2014, Luner was cast in the Investigation Discovery series Heartbreakers opposite Jack Wagner and Rob Estes.[6] The following year, she has appeared in two another Lifetime movies, The Wrong Girl and The Bride He Bought Online. She also had the recurring role on the second season of TNT crime drama, Murder in the First, and guest-starred on Better Call Saul and Code Black.[citation needed]

Luner was born in Palo Alto, California, a wealthy suburb in the San Francisco Bay Area, the daughter of Susan, an actress, and Stuart Luner, a sales representative. She was raised in a Jewish family and has an older brother, David.[7]

In February 2018, Luner was accused of drugging and filming a sexual encounter with Anthony Oliver, who had been a 16-year-old boy at the time of the alleged conduct in 1998. The lawsuit alleged that Luner had offered him whiskey and methamphetamines.[8]

On 6 August 2018, the Anthony Oliver lawsuit was dismissed based on the statute of limitations. The judge highlighted the fact that the plaintiff had waited 20 years to file the suit, well after the window had passed on any legal basis for the suit. Luner's team alleged that not only had the legal requirements not been met, but that the plaintiff's claims were actually part of an extortion attempt, and consistent with a history of baseless lawsuits. Nevertheless, the dismissal was to be appealed.[9]