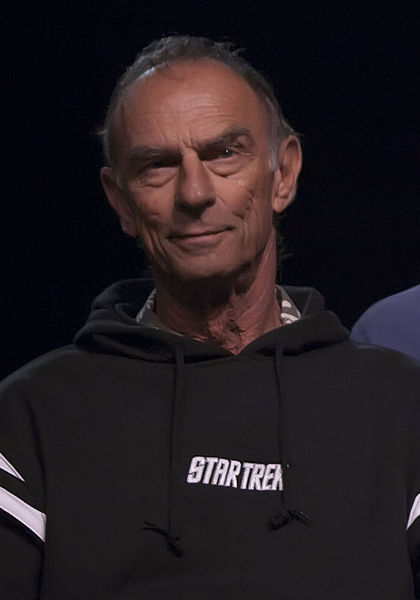 Marc Alaimo (born Michael Joseph Alaimo; May 5, 1942) is an American actor, known for his villainous roles. He is best known for his role as recurring villain Gul Dukat in the TV series Star Trek: Deep Space Nine.

Alaimo has been playing characters in television shows since 1971. He has appeared, mostly as villains, in shows such as The Doctors, Kojak, Gunsmoke, Baretta, The Bionic Woman, Starsky and Hutch, Knight Rider, Quincy, The Greatest American Hero, The Incredible Hulk, Quantum Leap, Family Guy, Walker, Texas Ranger, Wonder Woman, The Rockford Files, Hill Street Blues, and The A-Team. Alaimo has appeared in some feature films including the 1984 science fiction movie The Last Starfighter (portraying the human guise of an alien assassin), the Leslie Nielsen film Naked Gun 33⅓: The Final Insult, Tango & Cash, and the 1988 film The Dead Pool. He also appeared as Curtis Block in the television movie Case Closed and as a security officer on Mars in the Arnold Schwarzenegger movie Total Recall.

He played several characters in Star Trek: The Next Generation (Star Trek: TNG), starting in the first season. He has the distinction of two firsts on Star Trek: TNG, playing the first Romulan, Commander Tebok, in the 1988 episode "The Neutral Zone", and the first Cardassian (in any Star Trek series), Gul Macet, in the 1991 episode, "The Wounded". He also played a poker player who speaks French to Data in the episode "Time's Arrow". In 1993, Alaimo began playing Cardassian character Gul Dukat in Star Trek: Deep Space Nine. Gul Dukat was a recurring character, who appeared in 37 episodes of that series, and is his best-known character. He also appeared in a season two episode of 21 Jump Street.

Alaimo also featured in the 2006 video game Call of Juarez, and its 2009 prequel Call of Juarez: Bound in Blood, both times as the voice of the gunslinging Ray McCall. In 2010 he voiced The Dean in the Family Guy episode "The Splendid Source".

Alaimo was born in Milwaukee, Wisconsin. He has a son from his first marriage, Michael Antony Alaimo (born 1971), who is a writer, story editor and producer known for The Closer, Major Crimes, Invasion and Traveler.[1] Alaimo has a daughter from his second marriage, Ariel Rose (born 1989), who is an artist and stylist.