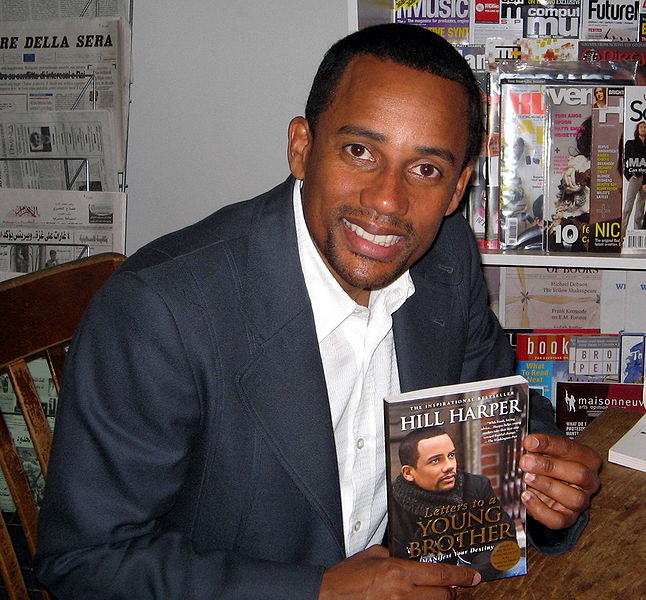 Francis Eugene "Hill" Harper[1] (born May 17, 1966) is an American actor and author. He is known for his roles on CSI:NY, Limitless, and The Good Doctor.

Although Harper earned three Ivy League degrees, he decided to pursue acting and moved to Los Angeles. He has received several honorary degrees, including honorary doctorates from both Westfield State College and Howard University.[9] Born Francis Eugene Harper, he adopted the name "Hill" as a tribute to both his maternal and paternal ancestors.[1]

Harper's first roles in television began in 1993, in a recurring role on the Fox series Married... with Children, while also making his film debut in the short film Confessions of a Dog. He had his first acting role in a feature film with Spike Lee's Get on the Bus (1996), which cast him as a UCLA film student riding a bus to the Million Man March in Washington, D.C. He went on to further demonstrate his versatility in such films as Christopher Scott Cherot's Hav Plenty (1997) and Lee's He Got Game (1998), the former of which featured him as an egotistical pop-soul singer.

His profile subsequently rose on both the mainstream and independent film circuits, thanks to roles in films ranging from Beloved (1998) to the independent romantic comedy Loving Jezebel (1999) to The Skulls (2000). Harper did some of his most acclaimed work in Jordan Walker-Pearlman's The Visit (2000), an independent drama in which he starred as a prisoner dying of AIDS who tries to put his life back together.[10] He also portrayed Leshem in the 2010 Syfy original movie Stonehenge Apocalypse.[11]

In February 2013, it was announced that CSI: NY would be ending and Harper would be joining the cast of Covert Affairs as a series regular.[12]

From April 21, 2015, to May 10, 2015, Harper starred as "Hard Rock" in the Off-Broadway play ToasT. The play (produced by Lemon Andersen and co-starred Keith David) is set in the Attica Prison around the time of its 1971 prison riot and tells of the lives of its prisoners using poetic prose.[13]

From May 1, 2018, to June 17, 2018, Harper starred as "Rooftop" in the Off-Broadway play Our Lady of 121st Street. This Dark Comedy (written by Stephen Adly Guirgis and directed by Phylicia Rashad) is about former students paying their respects to Sister Rose, only to find that Sister Rose’s body has been stolen.[14]

Since 2017, Harper has portrayed Dr. Marcus Andrews on the ABC series The Good Doctor.

In January 2008, Harper participated in "Yes We Can", a music video produced by will.i.am supporting presidential candidate Barack Obama. Harper is a member of the Obama for America National Finance Committee.[17] As of October 2009, Hill has made several contributions to political candidates, exclusively to Democrats. Harper endorsed the 10,000 Bookbags[18] back-to-school backpack campaign to help local disadvantaged children with Urban Change Ministries founder Pastor Jay Cameron of the Life Center, and R&B singer Ginuwine.[19] Harper stated that he is a fiscal conservative when he appeared on the political talk show Hannity on September 10, 2009. On February 22, 2016, the Lawyers' Committee for Civil Rights Under Law announced that Harper would be their national spokesman.[20]

In the fall of 2008, Harper was initiated as a member of the Alpha Phi Alpha fraternity with his Co-Initiates (called "Line Brothers") Dr. Naim Akbar of Florida State University and former NFL player Leo LeMarcus Newman.[22]

Harper won the NAACP Image Award for Outstanding Actor in a Drama Series for three consecutive years (2008-2010) for his portrayal of Dr. Sheldon Hawkes on CSI: NY. Previously he had been nominated for the award for three consecutive years (2005-2007), for the same character. In 2000, he had also been nominated for the award, for his role in the medical drama City of Angels. On January 9, 2014 his book Letters to an Incarcerated Brother: Encouragement, Hope, and Healing for Inmates and Their Loved Ones was nominated for an NAACP Image Award for Outstanding Literary Work - Non-Fiction.

While writing his book The Wealth Cure: Putting Money In Its Place, Harper was diagnosed with thyroid cancer. After treatment, he was given a clean bill of health.[25]

After being diagnosed with thyroid cancer, Harper researched the effects skin care products can have on a person's system. This led to his creating an all-natural personal care line for men and women, called Be The Architect.[26][27][28]

In November 2015, Harper received a call to adopt a baby boy from a homeless woman. He agreed, and by May 2017, the adoption of Pierce (named after Pierce Brosnan) Hill Harper was finalized.[29][30][31]