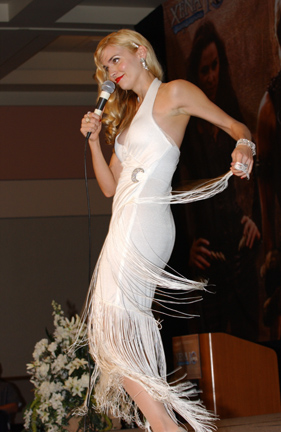 Heidi Hudson Leick (born May 9, 1969) is an American actress, known for her role as villainess Callisto in the television series Xena: Warrior Princess. She is a certified Yoga instructor and intuitive counselor at the Healing Heart Yoga Center.[1]

Leick started her career as a model in Japan, but decided to concentrate on acting. She took courses in drama and diction to improve her voice. In 1992, she appeared in one episode of the series CBS Schoolbreak Special. The following year, Leick appeared in an episode of Law & Order. She played a small role as a "sexpot" in University Hospital as nurse Tracy Stone.[3] In 1994, she appeared as the virtual reality designer Hannah in the television film Knight Rider 2010.[4]

Leick's big break came in 1995 when she won a part on Melrose Place. Leick appeared in ten episodes of the series. After a couple of small roles in Hijacked:Flight 285 and Dangerous Cargo, the director Robert Tapert selected Leick for the role of Callisto on Xena: Warrior Princess. Leick also portrayed Callisto on three episodes of Xena companion TV series Hercules: The Legendary Journeys,[5] as well as portraying screenwriter/producer Liz Friedman in two modern-day episodes.

In 2000, Leick announced at a convention that she would not be in more episodes of Xena: Warrior Princess or Hercules: The Legendary Journeys because she was being offered more and different roles, and felt that she needed to play another character besides Callisto. Beginning in 1999, she appeared in the films Chill Factor,[6] Hallowed Ground,[7] Blood Type, Denial, and After the Game, and had roles in the series 7th Heaven, Touched by an Angel, and Safe Harbor. She performed in A.I. Assault, CSI: Crime Scene Investigation, Lords of Everquest, Tru Calling (in its pilot episode), the voice of Jen in the computer game Primal,[8] Fastlane and Cold Heart.

In 2008, she finished the films One, Two, Many[9] and Unconditional.[10] She played the role of Coco DeVille in the Jackie Collins film, Paris Connections, which was released in 2010.