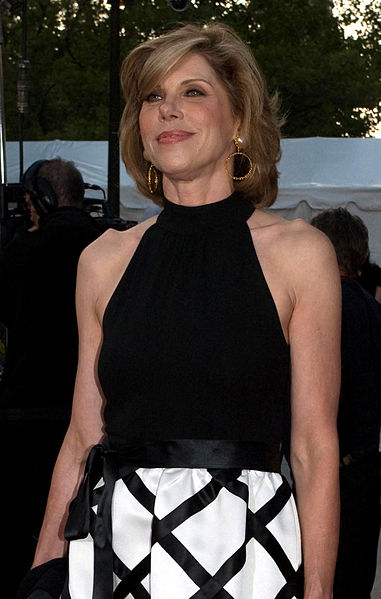 Christine Jane Baranski (born May 2, 1952) is an American actress, singer, and producer. She is a 15-time Emmy Award nominee, winning once in 1995 for Outstanding Supporting Actress in a Comedy Series for her role as Maryanne Thorpe in the sitcom Cybill (1995-98). Baranski has received further critical acclaim for her performance as Diane Lockhart in the legal drama series The Good Wife (2009-2016) and its spinoff series The Good Fight (2017-present), as well as her recurring role as Dr. Beverly Hofstadter in the sitcom The Big Bang Theory (2009-present) for which she has received two Emmy nominations. She is also known for her roles in numerous successful TV Films, most notably her portrayal of Kate in To Dance with the White Dog (1993), Prunella Stickler in Eloise at the Plaza, and Eloise at Christmastime (both 2003), and Amanda in Who Is Simon Miller? (2011).

Baranski was born in Buffalo, New York, the daughter of Virginia (née Mazurowski) and Lucien Baranski, who edited a Polish-language newspaper.[1][2] She is of Polish descent, and her grandparents were actors in the Polish theater.[3][4] Baranski was raised in a Polish-Catholic neighborhood in Cheektowaga, where she attended high school at the Villa Maria Academy.[5][6] She then studied at New York City's Juilliard School[7] (Drama Division Group 3: 1970-1974)[8] where she graduated with a Bachelor of Arts degree in 1974.[9]
Read more...

Baranski at the Metropolitan Opera 2010 opening night of Das Rheingold

Baranski made her Off-Broadway debut in Coming Attractions at Playwrights Horizons in 1980, and has appeared in several Off Broadway productions at the Manhattan Theatre Club, starting with Sally and Marsha in 1982.

Baranski made her Broadway debut in Hide & Seek in 1980. For her next Broadway performance, in Tom Stoppard's The Real Thing, she won the 1984 Tony Award Best Featured Actress in a Play. Other Broadway credits include: Hurlyburly, The House of Blue Leaves, Rumors (for which she won her second Tony), Regrets Only, Nick & Nora, and the Encores! concert staging of Follies.

At the Kennedy Center in Washington, D.C., Baranski starred as Mrs. Lovett in Sweeney Todd in 2002[10] (for which she won the 2003 Helen Hayes Award for Outstanding Actress in a Musical) and as the title character in Mame in 2006.[6]

In her first Broadway production since 1991, she was featured as the maid Berthe in the 2008 revival of Boeing Boeing.[11] The show garnered two Tony Awards, one for Best Revival of a Play and the other for Best Actor (Mark Rylance). The original cast was Bradley Whitford (Bernard), Kathryn Hahn (Gloria), Christine Baranski (Berthe), Gina Gershon (Gabriella), and Mary McCormack (Gretchen). The show closed on January 4, 2009.

She also appeared in a one night only concert benefit performance of Stephen Sondheim's A Little Night Music for Roundabout Theatre Company as Countess Charlotte Malcolm on January 12, 2009.[12] The cast included Vanessa Redgrave, Natasha Richardson, Victor Garber, and Marc Kudisch, among others.

She has won both the Tony and Drama Desk Awards twice.

Baranski has also starred in various roles in films. Some of her better known roles are as Katherine Archer in The Birdcage (1996), Martha May Whovier in How the Grinch Stole Christmas (2000), Mary Sunshine in Chicago (2002), and Connie Chasseur in The Ref (2004).

She received further recognition for her role as Tanya Chesham-Leigh in the hit musical film Mamma Mia! (2008), and its sequel, Mamma Mia! Here We Go Again (2018).

She also played Cinderella's stepmother in the 2014 film adaptation of the musical, Into the Woods.[13]

Baranski at the 2015 PaleyFest presentation for The Good Wife

Though widely reported to have worked as a child actress under the name "Chris Charney," Baranski denies ever having appeared on The Brady Bunch,[14] and states that "the first real TV show" that she worked on was the comedy series Cybill. Earlier, she had appeared in short-term roles on various daytime soap operas, including All My Children and Another World.

Baranski was featured as Cybill Shepherd's sarcastic, hard-drinking friend Maryanne Thorpe in the CBS sitcom Cybill, which ran from 1995 until 1998, during which time she hosted Saturday Night Live and won an Emmy Award as Best Supporting Actress in a Comedy Series along with three other nominations. During this, Baranski portrayed a librarian named Sonja Umdahl in the "Dick and the Single Girl" episode of 3rd Rock from the Sun.[15] A few years later, Baranski received an Emmy nomination for a guest starring role as an intimidating radio psychiatrist on an episode of the NBC series Frasier. She had an uncredited role in the series Now and Again as the voice of Roger's overbearing wife Ruth, who was never seen by viewers.

Baranski later appeared in the 2000-2001 sitcom Welcome to New York and, with John Laroquette, in the 2003-2004 NBC sitcom Happy Family. She co-starred with Bernadette Peters in a pilot for an ABC sitcom, Adopted, in 2005, which was not picked up. She also played Faith Clancy, the mother of Jim Clancy in Ghost Whisperer.

In 2009 Baranski began guest-starring in The Big Bang Theory as Dr. Beverly Hofstadter, a dispassionate psychiatrist and neuroscientist and mother of one of the protagonists, Leonard Hofstadter. She first appeared in the second-season episode "The Maternal Capacitance", for which she received an Emmy nomination. Due to the popularity of her first appearance, Baranski returned in the third season for the Christmas episode "The Maternal Congruence", receiving another Emmy nomination. As of July 2018, she has appeared in eleven more episodes.

From 2009 to 2016, she played the role of Diane Lockhart, a top litigator and senior partner of a Chicago law firm on the CBS series The Good Wife. She was nominated for the Primetime Emmy Award for Outstanding Supporting Actress in a Drama Series for six seasons of the series, in the years 2010 to 2015. Besides her work on The Good Wife and the aforementioned guest appearances on The Big Bang Theory, her other recent appearances include Ugly Betty in 2009 as Victoria Hartley, the haughty mother of Betty's new boyfriend.

Baranski currently stars in a spinoff of The Good Wife, titled The Good Fight. The series began airing on CBS and then CBS All Access starting in February 2017. Her character, Diane Lockhart, joins another law firm after being forced to return to work.[16]

Baranski was married to actor Matthew Cowles from October 1983 until his death on May 22, 2014.[2][17] They have two daughters, Isabel (born 1984) and Lily (born 1987), who is also an actress.[18] One of her daughters attended law school, passed the New York bar exam, and worked in the Brooklyn district attorney's office during the run of The Good Wife.[19]