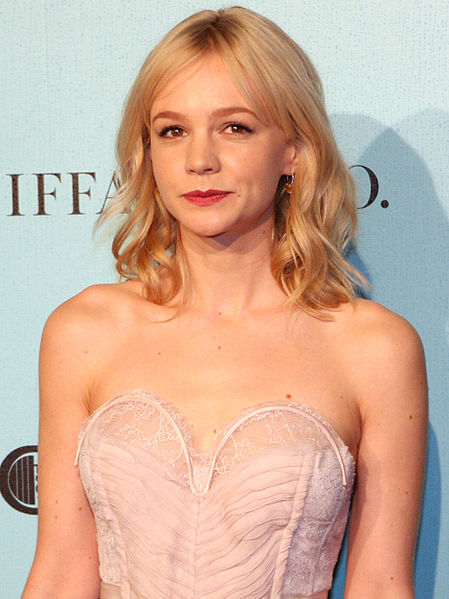 Carey Hannah Mulligan[1] (born 28 May 1985)[2] is an English actress and singer. Born in London and brought up in Düsseldorf, Germany and Surrey, Mulligan developed an avid passion for acting as a child and was the student head of the drama department at Woldingham School, acting in various play and musical productions. She made her professional acting debut on stage in the Kevin Elyot play Forty Winks at the Royal Court Theatre in London in 2004. Her film debut was in the role of Kitty Bennet in Pride & Prejudice (2005), followed by supporting roles as Ada Clarke on the BBC serial Bleak House (2005), Emily Pritchard on the BBC One drama series The Amazing Mrs Pritchard (2006), and a guest performance as Sally Sparrow in Doctor Who (2007). She made her Broadway debut in The Seagull in 2008 to critical acclaim, and her West End performance garnered her an Ian Charleson Commendation Award.

Mulligan was born in Westminster, London,[3][4] the daughter of Nano (née Booth) and Stephen Mulligan. Her father is of Irish descent and was originally from Liverpool. Her mother is from Llandeilo, Wales.[1][5][6] Her mother is a university lecturer and her father is a hotel manager.[5][7] Her parents met while they were both working in a hotel in their twenties. When she was three years old, her family moved to Germany when her father was hired to manage a hotel there. While living in Germany, Mulligan and her brother attended the International School of Düsseldorf.[8] When she was eight, she and her family moved back to England. As a teenager, she was educated at Woldingham School in Surrey.[9]
Read more...

Her interest in acting sparked from watching her brother perform in a school production of The King and I when she was six. During rehearsals, she pleaded with his teachers to let her be in the play. They let her join the chorus.[10] While enrolled in Woldingham School as a teen, she was heavily involved in theatre. She was the student head of the drama department there, performing in plays and musicals, conducting workshops with younger students, and helping put on productions.[11][12] When she was 16, she attended a production of Henry V starring Kenneth Branagh. His performance emboldened her and reinforced her belief that she wanted to pursue a career in acting. She wrote a letter to Branagh asking him for advice. "I explained that my parents didn't want me to act, but that I felt it was my vocation in life," she said. Branagh's sister replied: "Kenneth says that if you feel such a strong need to be an actress, you must be an actress."[10]

Mulligan's parents disapproved of her acting ambitions and wished for her to attend a university like her brother. At age 17, she applied to three London drama schools, instead of the universities that she was expected to submit an application to, but did not receive a subsequent offer.[10] During her final year at Woldingham School, actor/screenwriter Julian Fellowes delivered a lecture at the school on the production of the film Gosford Park. Mulligan briefly talked to him after the lecture and asked him for advice on an acting career. However, Fellowes dissuaded her from the profession and suggested that she "marry a lawyer" instead. Undeterred, she later sent Fellowes a letter in which she stated that she was serious about acting and that the vocation was her purpose in life. Several weeks later, Fellowes's wife Emma invited her to a dinner for young, aspiring actors that she and her husband were hosting to offer advice. The event facilitated an introduction between Mulligan and a casting assistant that led to an audition for a role in Pride and Prejudice. She auditioned on three occasions and was eventually given the role of Kitty Bennet.[10][7][13][14] During her late teens and early twenties, she worked as a pub barmaid and an errand-runner for Ealing Studios in between acting jobs.[13][15]

In 2004, at the age of 19, Mulligan began her acting on stage in the play Forty Winks at the Royal Court Theatre in London.[16][17] She made her film debut the following year in Pride & Prejudice, the 2005 film adaptation of the Jane Austen novel, portraying Kitty Bennet. Later that year, she auditioned for and won the role of orphan Ada Clare in the BAFTA award-winning BBC adaption of Charles Dickens' Bleak House, her television debut.[18] Among her 2007 projects were My Boy Jack, starring Daniel Radcliffe, that features her in a supporting role, and Northanger Abbey. She identified with her role Elsie, the daughter of writer Rudyard Kipling, who vociferously opposes her brother going to war.[19] She earned a Constellation Award for playing the main character Sally Sparrow in the Doctor Who episode "Blink".[20] She rounded out 2007 by appearing in an acclaimed revival of The Seagull, in which she played Nina to Kristin Scott Thomas's Arkadina and Chiwetel Ejiofor's Trigorin. The Daily Telegraph said her performance was "quite extraordinarily radiating'" and The Observer called her "almost unbearably affecting."[19] While in the middle of the production, she had to have an appendectomy, preventing her from being able to perform for a week.[19] For her debut Broadway performance in the 2008 American transfer of The Seagull, she was nominated for a Drama Desk Award, but lost to Angela Lansbury.[21]

Her big breakthrough came when, at 22, she was cast in her first leading role as Jenny in the 2009 independent film An Education, directed by Danish filmmaker Lone Scherfig and written by Nick Hornby. Over a hundred actresses auditioned for the part, but Mulligan's audition impressed Scherfig the most.[22][23] The film and her performance received rave reviews, and she was nominated for an Academy Award, Screen Actors Guild, Golden Globe, and won a BAFTA Award. Lisa Schwarzbaum of Entertainment Weekly and Todd McCarthy of Variety both compared her performance to that of Audrey Hepburn.[24][25] Rolling Stone's Peter Travers described her as having given a "sensational, starmaking performance,"[26] while Claudia Puig of USA Today felt that Mulligan had one of the year's best performances,[27] and Toby Young of The Times felt she anchored the film.[28] Writing in The Guardian, Peter Bradshaw concluded that she gave a "wonderful performance."[29] Mulligan was a recipient of the Shooting Stars Award from the 2009 Berlin International Film Festival[30] and received a BAFTA Rising Star Award nomination, which is voted on by the British public.[31]

Mulligan next starred in independent film The Greatest (2009) as the pregnant girlfriend of a boy who dies. Her involvement with the project helped it "tremendously", according to the director.[32] After being selected to join The Academy of Motion Picture Arts and Sciences,[33] she won a British Independent Award for Never Let Me Go, an adaption of the 2005 Kazuo Ishiguro's novel, in which she starred and narrated. It was released in September 2010, competing against her other project, the Oliver Stone-directed film Wall Street: Money Never Sleeps.[31] Screened out of competition at the 2010 Cannes Film Festival,[34] it was her first major studio project.[35] Later that year she also provided vocals for the song "Write About Love" by Belle & Sebastian.[36]

She returned to the stage in the Atlantic Theater Company's off-Broadway play adaptation of Ingmar Bergman's Through a Glass, Darkly, from 13 May - 3 July 2011.[37] Mulligan played the central character, a mentally unstable woman, and received glowing praise from reviewers.[38] Ben Brantley, theater critic for The New York Times, wrote that Mulligan's performance was "acting of the highest order"; he also described her as "extraordinary" and "one of the finest actresses of her generation.",[39]

Mulligan with the cast of The Great Gatsby (2013)

She starred as Daisy Buchanan, opposite Leonardo DiCaprio, in The Great Gatsby, which was released in May 2013.[43][44] Mulligan auditioned for the role of Daisy in late 2010. While attending a Vogue fashion dinner in New York City in November, Baz Luhrmann’s wife, Catherine Martin, told her she had the part. In May 2012, she was a co-chair, alongside Anna Wintour, for the Gatsby-themed 2012 Met Ball Gala.[45][46]

She starred in the film adaptation of Thomas Hardy's novel Far from the Madding Crowd with Tom Sturridge, Matthias Schoenaerts, and Michael Sheen for director Thomas Vinterberg and Fox Searchlight.[47][48]

She starred in the June 2014 revival of the play Skylight with Bill Nighy and Matthew Beard, directed by Stephen Daldry, at Wyndham's Theatre in London's West End.[49] It won the 2014 Evening Standard Theatre Award for Revival of the Year and was nominated for the 2014 Olivier Award for Best Revival.[50] She returned to Broadway when Skylight transferred in April 2015. Her performance as Kyra Hollis was received with critical acclaim and she has received a nomination for the Tony Award for Best Performance by a Leading Actress in a Play.[51][52]

She starred in Suffragette for director Sarah Gavron and screenwriter Abi Morgan, released in October 2015.[53]

In September 2016, it was announced that she would star opposite Jake Gyllenhaal in the independent film Wildlife, the adaptation of a Richard Ford novel of the same name. The film would be directed by Paul Dano with a screenplay written by Dano and Zoe Kazan.[54]

Mulligan is married to Marcus Mumford, the lead singer of Mumford & Sons. They were childhood pen pals who lost touch and reconnected as adults.[55][56] A few weeks after wrapping production on the film Inside Llewyn Davis, in which they were both involved, they married on 21 April 2012.[57] They have a daughter, born in September 2015, and a son, born in August 2017.[58][59]

She has an older brother, Owain, who was formerly a Captain in the British Army. He served in both Iraq and Afghanistan.[10][60][61]

Aside from acting, Mulligan was among the actresses who took part in the Safe Project—each was photographed in the place she feels safest—for a 2010 series to raise awareness of sex trafficking.[62] She donated the Vionnet gown she wore at the 2010 BAFTAs to the Curiosity Shop, which sells its donations to raise money for charity.[63]

In 2014, Mulligan became an ambassador for the charity War Child; in 2014 she visited the Democratic Republic of Congo in this role.[68][69]