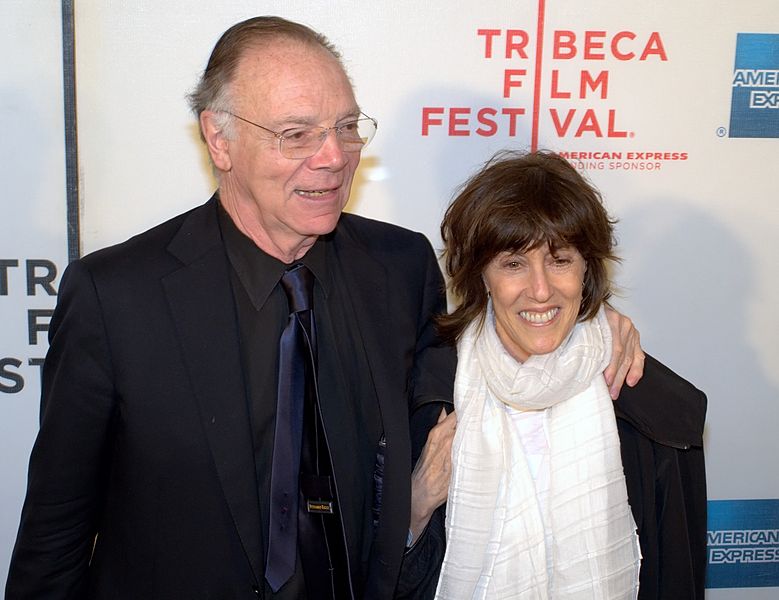 Nora Ephron (/ˈɛfrən/ EF-rən;[1] May 19, 1941 - June 26, 2012) was an American journalist, writer, and filmmaker. She is best known for her romantic comedy films and was nominated three times for the Academy Award for Best Writing: for Silkwood (1983), When Harry Met Sally... (1989), and Sleepless in Seattle (1993). She won a BAFTA Award for Best Original Screenplay for When Harry Met Sally.... She sometimes wrote with her sister Delia Ephron. Her last film was Julie & Julia (2009).[2] Her first produced play, Imaginary Friends (2002), was honored as one of the ten best plays of the 2002-03 New York theatre season.[3] She also co-authored the Drama Desk Award-winning theatrical production Love, Loss, and What I Wore.[2][4] In 2013, Ephron received a posthumous Tony Award nomination for Best Play for Lucky Guy.[5]

Ephron was born in New York City, the eldest of four daughters, and grew up in Beverly Hills, California.[6] Her parents, Henry and Phoebe (née Wolkind) Ephron, were both East Coast-born and were noted playwrights and screenwriters. Ephron was named after the protagonist in the play A Doll’s House, written by Henrik Ibsen.[7] Nora's younger sisters, Delia and Amy, are also screenwriters. Her sister Hallie Ephron is a journalist, book reviewer, and novelist who writes crime fiction. Ephron's parents based the ingenue character in the play and film version of Take Her, She's Mine on the 22-year-old Nora and her letters from college.[8] Both her parents became alcoholics during their declining years.[6] As a high school student, Nora Ephron dreamed of going to New York City to become another Dorothy Parker, an American poet, writer, satirist, and critic.[9] Ephron has cited her high school journalism teacher, Charles Simms, to inspire her to pursue a career in journalism.[7] Ephron graduated from Beverly Hills High School in 1958, and from Wellesley College in Wellesley, Massachusetts, in 1962 with a degree in political science.[10]

She was married three times. Her first marriage, to writer Dan Greenburg, ended in divorce after nine years.[6] In 1976, she married journalist Carl Bernstein. In 1979, Ephron had a toddler son, Jacob, and was pregnant with her second son Max when she discovered Bernstein's affair with their mutual friend,[11] married British journalist Margaret Jay. Ephron was inspired by this to write the 1983 novel Heartburn,[12] which was then made into a 1986 Mike Nichols film starring Jack Nicholson and Meryl Streep. In the book, Ephron wrote of a husband named Mark, who was "capable of having sex with a Venetian blind."[6] She also wrote that the character Thelma (based on Margaret Jay) looked like a giraffe with "big feet".[6] Bernstein threatened to sue over the book and film but never did.[8]

Ephron was married for more than 20 years to screenwriter Nicholas Pileggi until her death. The couple lived in the Hollywood Hills in Los Angeles, and in New York City.

Ephron was Jewish by birth. Ephron's friend Richard Cohen said of her, "She was very Jewish, culturally and emotionally. She identified fully as a Jewish woman."[13] However, Ephron was not religious. "You can never have too much butter - that is my belief. If I have a religion, that's it", she quipped in an NPR interview about her 2009 movie, Julie & Julia.[14]

Her son, Jacob Bernstein, directed an HBO movie on her life called Everything Is Copy.[15]

After graduating from Wellesley College in 1962, Ephron worked briefly as an intern in the White House of President John F. Kennedy.[16] She also applied to be a writer at Newsweek. After she was told they did not hire women writers, she accepted a position as a mail girl.[17]

After eventually quitting Newsweek because she was not allowed to write, Ephron participated in a class action lawsuit against the magazine for sexual discrimination, described in the book The Good Girls Revolt: How the Women of Newsweek Sued Their Bosses and Changed the Workplace by Lynn Povich, and both the lawsuit and Ephron’s role were fictionalized in a 2016 Amazon series by the similar main title Good Girls Revolt.[18]

After a satire in Monocle she wrote lampooning the New York Post caught the editor's eye, Ephron accepted a job at the Post, where she worked as a reporter for five years.[8] In 1966, she broke the news in the Post that Bob Dylan had married Sara Lownds in a private ceremony.[19] Upon becoming a successful writer, she wrote a column on women's issues for Esquire.[6] In this position, Ephron made a name for herself by taking on subjects as wide-ranging as Dorothy Schiff, her former boss and owner of the Post; Betty Friedan, whom she chastised for pursuing a feud with Gloria Steinem; and her alma mater Wellesley, which she said had turned out "a generation of docile and unadventurous women."[8] A 1968 send-up of Women's Wear Daily in Cosmopolitan resulted in threats of a lawsuit from WWD.[8]

She rewrote a script for All the President's Men in the mid-1970s, along with her then husband Bernstein. While the script was not used, it was seen by someone who offered Ephron her first screenwriting job, for a television movie,[8] which began her screenwriting career.[20]

In 1983, Ephron coscripted the film Silkwood with Alice Arlen. The film, directed by Mike Nichols, stars Meryl Streep as Karen Silkwood, a whistleblower at the Kerr McGee Cimarron nuclear facility who dies under suspicious circumstances.[21] Ephron and Arlen were nominated for Best Original Screenplay in 1984 for Silkwood.[22]

Ephron’s novel, Heartburn, was published in 1982.[7] The novel is a semi-autobiographical account of her marriage with Carl Bernstein.[7] The film adaptation was released in 1986, directed by Mike Nicols starring Meryl Streep and Jack Nicholson. Ephron adapted her own novel into the screenplay for the film.[7] In the film, Ephron's fictionalized portrayal of herself, played by Streep, is a pregnant food writer when she learns about her husband's affair.[23]

Ephron wrote the script for the romantic comedy When Harry Met Sally... in 1989. The film, directed by Rob Reiner, starred Billy Crystal and Meg Ryan. The film depicts the decade-long relationship between Harry (Crystal) and Sally (Ryan) as they navigate their own romantic relationships. Ephron has claimed that she wrote this screenplay with Reiner in mind as the character of Harry, and herself as the character of Sally.[7] The film has become iconic in the romantic comedy genre, most notably for the scene in which Sally pretends to have an orgasm in the middle of Katz's Deli during lunch. Ephron said she wrote the part of Sally having an orgasm into the script per Meg Ryan’s suggestions. Additionally, the comment “I’ll have what she’s having,” said by a deli patron watching the scene unfold nearby, was an idea from Billy Crystal.[24] Ephron's script was nominated for the 1990 Oscar in Best Writing, Screenplay Written Directly for the Screen.[24]

Ephron’s directorial debut was the 1992 film This is My Life. Ephron and her sister, Delia Ephron, wrote the script based on Meg Wolizer’s novel, This is Your Life.[7] The film is about a woman who decides to pursue a career in stand up comedy after inheriting a substantial sum of money from a relative.[7]

In 1993, Ephron directed and wrote the script for the romantic comedy Sleepless in Seattle. The film stars Tom Hanks as Sam Baldwin, a recently widowed father whose son calls into a Seattle-based radio talk show in an attempt to find his father a new partner. After hearing this call, New Yorker Annie Reed, played by Meg Ryan, becomes infatuated with Sam, and sets up a rendezvous for the two to meet. The film overtly references the 1957 film, An Affair to Remember, as Annie plans for their meeting at the top of the Empire State Building.[25]

In 1998, Ephron released the film You’ve Got Mail, which she wrote the script for and directed. The story is a loose adaptation of the Ernst Lubitsch film from 1940, The Shop Around the Corner.[7] You’ve Got Mail stars Meg Ryan as Kathleen Kelly, an owner of a small, independent children’s bookstore in New York City. Her quiet life is then threatened by Fox Books, a Barnes & Noble-esque book selling chain, which opens near her shop. Fox Books is run by Joe Fox, played by Tom Hanks. Joe and Kathleen navigate a tumultuous business rivalry, while unknowingly they form an intimate connection with each other via email.[27]

In 2009, Ephron directed and co-wrote the screenplay for Julie & Julia.[7] The film is based on Julie Powell’s blog and memoir of the same title. The film is about Julia Child, a famous mid-century American cook played by Meryl Streep, and Julie Powell, a New Yorker attempting to cook her way through Child’s cookbook, played by Amy Adams. As Powell blogs her experience, the film flashes back to the story of Child’s first stages of her career as she trains in a French culinary school.[28] The film was a financial and commercial success.[7] Streep was nominated for the 2010 Academy Award for Best Performance by an Actress in A Leading Role.[28]

Ephron's 2002 play Imaginary Friends explores the rivalry between writers Lillian Hellman and Mary McCarthy. She co-authored the play Love, Loss, and What I Wore (based on the book by Ilene Beckerman) with her sister Delia, and it has played to sold out audiences in Canada, New York City and Los Angeles.[citation needed]

For many years, Ephron was among only a handful of people in the world who knew the true identity of Deep Throat, the source for news articles written by her ex-husband Carl Bernstein and Bob Woodward during the Watergate scandal.[29] Ephron claimed she had guessed the identity of Deep Throat after reading Bernstein's notes, which referred to the unnamed person as "MF".[29] Bernstein claimed "MF" was short for "My Friend," but Ephron guessed correctly that the initials stood for Mark Felt, the former associate director of the FBI.[29]

Ephron's marriage with Bernstein ended acrimoniously, and after the breakup Ephron was open about the identity of Deep Throat.[6] She revealed his identity to her son Jacob and anyone else who asked. She once commented, "I would give speeches to 500 people and someone would say, 'Do you know who Deep Throat is?' And I would say, 'It's Mark Felt.'"[6] Classmates of Jacob Bernstein at the Dalton School and Vassar College recall Jacob's revealing to numerous people that Felt was Deep Throat. This revelation attracted little media attention during the many years that the identity of Deep Throat was a mystery. Ephron later conceded that "No one, apart from my sons, believed me."[30] Ephron was invited by Arianna Huffington to write about the experience in the Huffington Post, for which she was a regular blogger and part-time editor.[29]

On June 26, 2012, Ephron died from pneumonia, a complication resulting from acute myeloid leukemia,[2] which she was diagnosed with in 2006.[31]

In her final book, I Remember Nothing (2010), Ephron left clues that something was wrong with her or that she was ill, particularly in a list at the end of the book citing "things I won't miss/things I'll miss".[32]

Many people were taken by surprise by the notice of her death as she had kept her illness secret from most people. Meryl Streep, Bette Midler, Barbara Walters, Joy Behar, Matthew Broderick, Billy Crystal, Meg Ryan, Nicole Kidman, Tom Hanks, Albert Brooks, and Ron Howard commented on her brilliance, warmth, generosity, and wit.[33][34]

At the Karlovy Vary Film Festival of that year, actresses Helen Mirren and Susan Sarandon, who were honored with the Lifetime Achievement Award, paid tribute to her during their speeches.

The Nora Ephron Prize is a $25,000 award by the Tribeca Film Festival for a female writer or filmmaker "with a distinctive voice".[35] The first Nora Ephron Prize was awarded in 2013 to Meera Menon for her film Farah Goes Bang.[35]

Essay collections and other works

Report a problem
Biography of Nora Ephron at FanPal • 2022