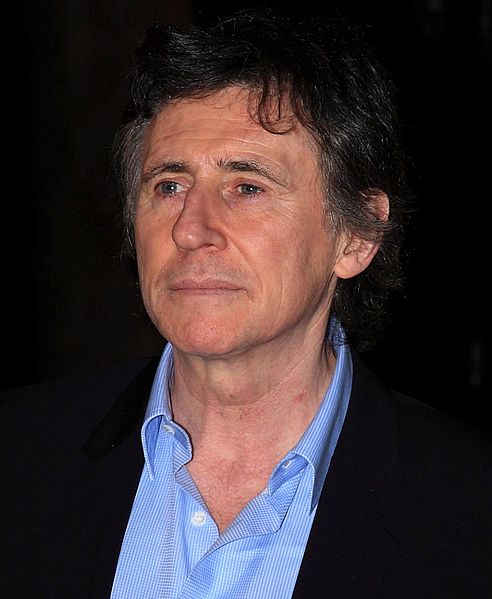 One of Byrne's most identifiable roles is that of Paul Weston in the HBO drama In Treatment (2008-2011), for which he won a Golden Globe Award and was nominated for two Emmy Awards and two Satellite Awards.

In 2018, Byrne was awarded the Irish Film and Television Academy Lifetime Achievement Award for his contribution to Irish cinema

Byrne was born in Walkinstown, Dublin, the eldest of six children raised by devoutly Roman Catholic parents: a cooper and soldier, Dan, and a hospital nurse, Eileen (née Gannon) from Elphin, County Roscommon.[1] He has four siblings: Donal, Thomas, Breda, and Margaret; another, Marian, died at an early age.[2]

He attended Ardscoil Éanna in Crumlin, where he later taught Spanish and History.[3] About his early training to become a priest, he said in an interview, "I spent five years in the seminary and I suppose it was assumed that one had a vocation. I realised subsequently that I didn't."[4] He attended University College Dublin, where he studied archaeology and linguistics,[5] becoming proficient in Irish.

He played football in Dublin with Stella Maris.[6]

In January 2011, he spoke in an interview on The Meaning of Life about being sexually abused by priests during his childhood.[7][8]

Byrne worked in archaeology when he left UCD. He maintained his love of his language, later writing the first television drama in Irish, Draíocht, on Ireland's national Irish-language television station, TG4, when it began broadcasting in 1996.[9]

Before becoming an actor, Byrne had many jobs, including archaeologist, cook, and Spanish and History schoolteacher at Ardscoil Éanna in Crumlin, Dublin. He started acting at age 29,[5] and began his career on stage with the Focus Theatre and the Abbey Theatre in Dublin. He later joined the Performing Arts Course in Sandymount Dublin 4 (Roslyn Park College) . Byrne came to prominence on the final season of the Irish television show The Riordans,[5] subsequently starring in his own spin-off series, Bracken. His first play for television was Michael Feeney Callan's Love Is ... (RTÉ). He made his film debut in 1981, as King Uther Pendragon in John Boorman's King Arthur epic, Excalibur.[5]

In 1983, he appeared with Richard Burton in the miniseries Wagner, co-starring Laurence Olivier, John Gielgud and Ralph Richardson.[10] In 1985, Byrne starred in the acclaimed political thriller Defence of the Realm, though he subsequently claimed he had been upstaged by his co-star, veteran actor Denholm Elliott: "I amended the actor's cliché to 'Never work with children, animals or Denholm Elliott'."[11]

Byrne holding his Herald Angel, an award given to him at the 2006 Edinburgh International Film Festival.

Upon his return to theatre in 2008, he appeared as King Arthur in Camelot with the New York Philharmonic from 7 to 10 May, following the footsteps of veteran actors Richard Burton and Richard Harris. Byrne was cast in a film adaptation of Flann O'Brien's metafictional novel At Swim-Two-Birds, alongside Colin Farrell and Cillian Murphy. Actor Brendan Gleeson was set to direct the film.[13] In October 2009, however, Gleeson expressed fear that, should the Irish Film Board be abolished as planned by the Irish State, the production might fall through.[14]

Byrne starred as therapist Paul Weston in the HBO series In Treatment from 2008 to 2010. He was named as TV's "latest Dr. McDreamy" by The New York Times[15] for this role, and won the Golden Globe Award for Best Actor in a Drama Series in 2008. He also received his first Emmy Award nomination (Best Lead Actor in a Drama Series) for the 60th Primetime Emmy Awards that same year.[citation needed]

In 2011, Byrne signed up to appear in a movie by director Costa Gavras; Le Capital,[16] an adaptation of Stéphane Osmont's novel of the same name. In 2013, he starred as Earl Haraldson in the first season of Vikings opposite Travis Fimmel and Clive Standen.[citation needed]

In 2017, he appeared in Mad to Be Normal (previously titled Metanoia), a biopic of the Scottish psychiatrist R. D. Laing, produced by Gizmo Films.[17]

He was cultural ambassador for Ireland until he criticised the tourism initiative The Gathering, describing it as an attempt by Ireland's politicians and media to fleece wealthy Americans.[18] Byrne criticised the marketing strategy employed by Guinness known as Arthur's Day as "a cynical piece of exercise in a country which has a huge drinking problem."[19]

He had begun a relationship with actress Ellen Barkin, and relocated to New York City to be with her. A year later, in 1988, Byrne married Barkin, with whom he has two children, John "Jack" Daniel (born 1989) and Romy Marion (born 1992). The couple separated amicably in 1993, and then divorced in 1999. Byrne currently resides in Manhattan.[21]

Byrne is actively involved in various charities. In 2004, Byrne was appointed a UNICEF Ireland Ambassador. He became a patron of Croí (The West of Ireland Cardiology Foundation) in 1997 in response to the care given to his mother while she was a patient in a Galway hospital.[citation needed]

At the 5th Jameson Dublin International Film Festival in 2007, Byrne was presented with the first of the newly created Volta awards, for lifetime achievement in acting. He received the Honorary Patronage of the University Philosophical Society, of Trinity College, Dublin on 20 February 2007. In November 2007, he was awarded an honorary degree by the National University of Ireland, Galway; the president of the University, Iognáid Ó Muircheartaigh, said that this award is in recognition of the actor's "outstanding contribution to Irish and international film".[22]

Although the actor is noted as a fiercely private person, he released a documentary for the 20th Galway Film Fleadh in the summer of 2008 called Stories from Home, an intimate portrait about his life. It premiered in the US in September 2009 at the Los Angeles Irish Film Festival.[23]

Byrne mentioned in interviews and his 1995 autobiography, Pictures in My Head that he hates being called "brooding". He has been listed by People as one of the "Sexiest Men Alive". Entertainment Weekly has also dubbed Byrne as one of the hottest celebrities over the age of 50.[24]