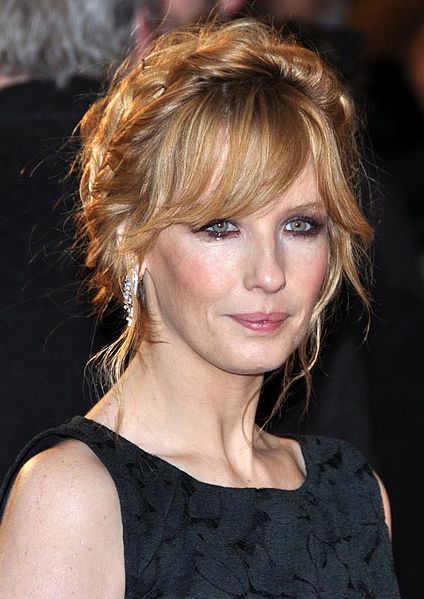 Jessica Kelly Siobhán Reilly[1] (born 18 July 1977), better known by the stage name Kelly Reilly, is an English actress. Her performance in After Miss Julie at the Donmar Warehouse made her a star of the London stage and earned her a nomination for a Laurence Olivier Award for Best Actress of 2003. Débuting 20 June 2018, Reilly is the female lead in the new American Paramount Network's cowboy-themed drama series, Yellowstone.

Reilly was born and brought up in Chessington, Surrey, England, the daughter of a hospital receptionist mother, and Jack Reilly, a police officer. She attended Tolworth Girls' School in Kingston, where she studied drama for GCSE.[2][3] Her grandparents are Irish.[4]
Read more...

Reilly wrote to the producers of the television drama Prime Suspect to ask for work, and six months later she auditioned for a role in an episode of Prime Suspect 4: Inner Circle, which was broadcast on ITV on 7 May 1995. Six years later, she again appeared alongside Helen Mirren in the film Last Orders.[5]

Her first professional role was followed by a series of parts on the English stage. She worked with Terry Johnson in four productions: Elton John’s Glasses (1997), The London Cuckolds (1998), The Graduate (2000) and Piano/Forte (2006).[6] Johnson wrote Piano/Forte for her and said, "Kelly is possibly the most natural, dyed-in-the-wool, deep-in-the-bone actress I've ever worked with."[7] Reilly has stated that she learned the most as an actor from Karel Reisz, who directed her in The Yalta Game in Dublin in 2001. She said, "He was my masterclass. There is no way I would have been able to do Miss Julie if I hadn't done that play."[8]

By 2000, Reilly felt she was being typecast in comedy roles, and actively sought out a role as the young Amy in Last Orders, directed by Fred Schepisi.[5] This was followed by a role in the Royal Court's 2001 rerun of Sarah Kane's Blasted. The Times called her "theatrical Viagra".[9] In 2002, Reilly starred alongside Audrey Tautou and Romain Duris as Wendy, an English Erasmus student, in the French comedy L'Auberge espagnole (The Spanish Apartment). She reprised her role in the 2005 sequel, Les Poupées russes (The Russian Dolls) and the 2013 follow-up, Casse-tête chinois (Chinese Puzzle). Also in 2005, Reilly had roles in such films as Mrs Henderson Presents and Pride & Prejudice.

Reilly's first lead role came in 2008 in the horror film Eden Lake and, in 2009, she had a high-profile role on prime-time British television in Above Suspicion. Reilly also appeared in three major films: Sherlock Holmes, Triage, and Me and Orson Welles.

In 2011, Reilly reprised her role as Mary Watson in Sherlock Holmes: A Game of Shadows. In 2012, Reilly appeared opposite Sam Rockwell in A Single Shot and had a leading role in Robert Zemeckis' Flight opposite Denzel Washington. In 2014, Reilly starred with Greg Kinnear in the film Heaven is for Real and in the John Michael McDonagh film Calvary. The same year Reilly starred in the short-lived ABC series Black Box, as Catherine Black, a famed neuroscientist who explores and solves the mysteries of the brain (the black box) while hiding her own bipolar disorder from the world.

In 2015, Reilly starred in the second season of HBO's True Detective as Jordan Semyon, the wife of Vince Vaughn's character Frank Semyon. The same year, Reilly made her Broadway debut opposite Clive Owen and Eve Best in Harold Pinter's play Old Times at the American Airlines Theatre.[10][11]

Kelly now stars in the leading female role in the sweeping "Western"-style U.S. series Yellowstone, the Paramount Network's new drama that débuted on 20 June 2018. Reilly plays Beth Dutton, the hard-as-nails financial arm of the Dutton pursestrings, and daughter to John Dutton, played by Academy Award™-winning screen legend Kevin Costner. For dramatic licence only, the Duttons own the largest ranch in Montana, where the series is set (and mostly filmed, on location), as well as the biggest ranch in the contiguous 48 states. Reilly's and Costner's characters are constantly at war with several outside parties who want from parcels to enormous chunks of the Duttons' family land. But John won't hear any of it, and understandably, conflict ensues.

Reilly's performance in After Miss Julie at the Donmar Warehouse made her a star of the London stage and earned her a nomination for a Laurence Olivier Theatre Award for Best Actress of 2003. Aged 26, she was the youngest person ever nominated for that award.[7] In 2005, she won Best Newcomer Award at the Cannes Film Festival for her role as Wendy in The Russian Dolls (Les Poupées Russes).[7] In 2006, Reilly won the Empire Award for Best Newcomer for her role in the British comedy film, Mrs Henderson Presents. She was nominated once again for an Olivier Award for her performance as Desdemona in the acclaimed production of Othello at the Donmar Warehouse in 2009. Reilly was nominated for Best Actress at the British Independent Film Awards for Eden Lake in 2010. She won the Spotlight Award at the 2012 Hollywood Film Festival, for her performance as Nicole in Flight.