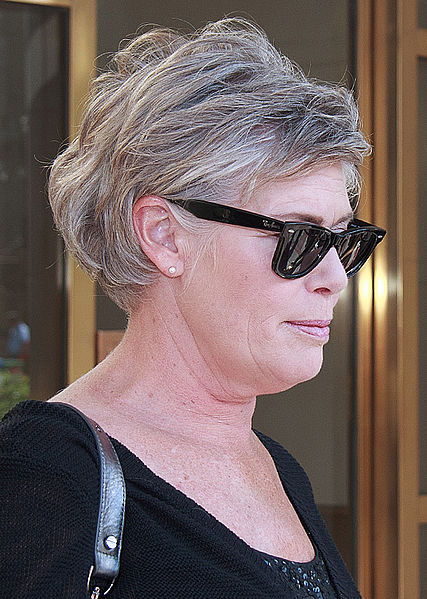 Kelly Ann McGillis (born July 9, 1957) is an American actress widely known for her film role as Rachel Lapp in Witness (1985) with Harrison Ford, for which she received Golden Globe and BAFTA nominations; her role as Charlie in Top Gun (1986) with Tom Cruise, and her role as Kathryn Murphy in The Accused (1988) with Jodie Foster.[1]

McGillis was born July 9, 1957, in Newport Beach, California, the daughter of Virginia Joan (née Snell), a homemaker, and Dr. Donald Manson McGillis, a doctor.[2][3] McGillis is of Scots-Irish descent from her father's side, and German from her mother, and Welsh also.[4]

McGillis was raised in Los Angeles, and attended the Pacific Conservatory of the Performing Arts at Allan Hancock College in Santa Maria, California.[5] After graduating from high school in 1975, she moved to New York City to study acting at the Juilliard School,[6] where she graduated in 1983, Group 12.[5][7]

After making her film debut in Reuben, Reuben[8] in 1983, McGillis' breakout role was that of an Amish mother in the 1985 film Witness with Harrison Ford, for which she received Golden Globe and BAFTA award nominations. Her next high-profile role was that of flight instructor Charlie in the 1986 fighter-pilot film Top Gun with Tom Cruise and Val Kilmer.[9]

In 1987, McGillis acted in the fantasy-comedy film Made in Heaven, directed by Alan Rudolph, which was produced by Lorimar Productions. The film also co-stars Oscar winner Timothy Hutton.[10]

McGillis played the part of caretaker for Miss Venable (Jessica Tandy) in 1988's The House on Carroll Street, which also starred Jeff Daniels. She overhears a suspicious conversation in the house next door and suspects that she's stumbled on a conspiracy to smuggle Nazi war criminals into the United States.

After 1988's The Accused, she appeared in Cat Chaser with Peter Weller, a film she despised and which discouraged her from pursuing an acting career.[11][12] McGillis appeared in dozens of television and film roles throughout the 1990s before taking a break from acting for a few years.

In 1999, McGillis co-starred with Val Kilmer (who plays Virgil, a blind man), for a second time as his over protective sister in At First Sight.[13]

She played the suspect in the disappearance of a young woman starring Susie Porter in The Monkey's Mask, an international lesbian cult film from 2000. The film is based on the verse novel of the same name by Australian poet Dorothy Porter.[14]

McGillis' early television roles included a part on the daytime soap One Life to Live in 1984.

She also starred in television movies with Alec Baldwin in 1984's Sweet Revenge, which was re-titled at some point.

Other televion films during 1980s included Private Sessions in 1985, and as a narrator in Santabear's First Christmas. She also narrated for PBS the documentary Out of Ireland in 1995.

While at Juilliard she performed in William Congreve's Love for Love, directed by John Bletchley.[15] She appeared in a couple of off-broadway and Broadway theater productions during the 1980's in New York City.

During the late 1980's[16] and through the mid 2000's, McGillis was a featured actress at the prestigious Shakespeare Theatre Company in Washington DC.[17] Appeared in production of John Webber's play "The Duchess of Malfi" at the Shakespeare Theatre, Washington, DC. (2002)

In 2004, she appeared in the stage play The Graduate as Mrs. Robinson, touring the United States.[18] McGillis starred in a Pasadena Playhouse stage production of The Little Foxes by Lillian Hellman in May 2009, co-starring with Julia Duffy.[19]

She also appeared in a production of Frankie and Johnny in the Clair de Lune by Terrence McNally, which toured the United Kingdom in 2010.[20]

Return to film and TV

McGillis has been cast in the lead in the biographical film Annie Cook,[29] and also filmed Mother of All Secrets in early 2017 in Bermuda, and that trailer has already been released.[30][31]

McGillis came out as a lesbian in April 2009 during an interview with SheWired.[34][35] In 2010, McGillis entered into a civil union with Melanie Leis, a Philadelphia sales executive; she and McGillis met in 2000 when Leis was a bartender at Kelly's Caribbean Bar Grill & Brewery[36] in Key West, Florida,[37] which McGillis owned with her then-husband Fred Tillman.[38] They sold the restaurant in June 2017. Leis and McGillis broke up in 2011.

McGillis worked full-time with drug addicts and alcoholics at Seabrook House Drug Alcohol Rehab Center, a rehabilitation center in Bridgeton, New Jersey, when she and Leis shared a home in Collingswood.[39]

McGillis was left scratched and bruised after being reportedly assaulted by a woman who broke into her North Carolina home on June 17, 2016.[41] She said the attack, as well as others she has experienced in the past, led her to apply for a concealed carry gun permit to protect herself. Following the incident, a 38-year-old woman, Laurence Marie Dorn, was charged with second-degree burglary, misdemeanor larceny, misdemeanor stalking, assault and battery, and interfering with emergency communication.[41] Dorn was later convicted of misdemeanor breaking and entering.[42]