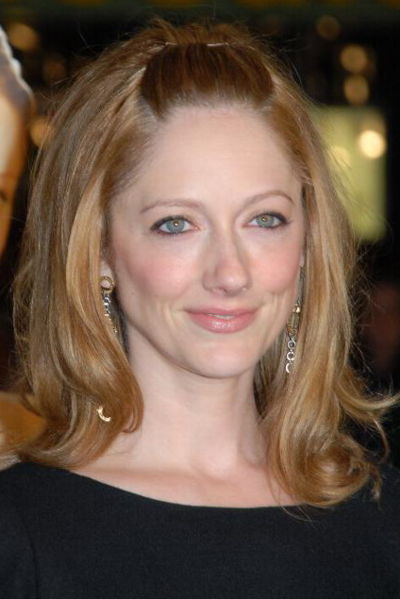 Judith Therese Evans (born July 20, 1975), known professionally as Judy Greer, is an American actress, director, model, and author. She is primarily known as a character actor[2] who has appeared in a variety of comedic and dramatic films.

A native of Detroit, Greer studied theater at DePaul University in Chicago before appearing in several independent films. She had her first major role in the black comedy Jawbreaker (1999), followed by a supporting role as a journalist in David O. Russell's war film Three Kings (1999). Greer went on to have supporting roles in several romantic comedies, such as What Women Want (2000), The Wedding Planner (2001), 13 Going on 30 (2004), Elizabethtown (2005), 27 Dresses (2008), and Love & Other Drugs (2010). Greer also had various supporting roles in dramatic films, including the meta comedy-drama Adaptation (2002) and the psychological thriller The Village (2004).

On television, Greer was cast in recurring guest roles on the television comedy series Arrested Development as Kitty Sanchez, and as Fatty Magoo in It's Always Sunny in Philadelphia. Between 2007 and 2012, she had a recurring role on the Showtime series Californication, and has provided the voice of Cheryl Tunt in the animated comedy series Archer since 2009. She stars in the Showtime comedy-drama series Kidding.

In the early 2010s, Greer had supporting roles in the drama film The Descendants (2011), as well as the 2013 horror remake Carrie. In 2014, Greer began appearing in several action and science fiction films, portraying Cornelia in Dawn of the Planet of the Apes, a role she later reprised in the sequel film War for the Planet of the Apes (2017). In the Marvel Cinematic Universe, she portrays Maggie Lang, appearing in Ant-Man (2015) and Ant-Man and the Wasp (2018). She also had supporting roles in Jurassic World (2015) and David Gordon Green's horror film Halloween (2018). She made her directorial debut in 2017 with the comedy-drama film A Happening of Monumental Proportions.

In 2011, Greer began hosting an online series of workout videos called Reluctantly Healthy, which was adapted into a series by Litton Entertainment in 2014 as part of their Saturday morning One Magnificent Morning block for The CW.[3] Also in 2014, she released her first autobiographical novel, titled I Don't Know What You Know Me From: Confessions of a Co-Star.[4]

Greer was born Judith Therese Evans on July 20, 1975[5][6] in Detroit, Michigan. Her mother, Mollie Ann (née Greer), is a hospital administrator, and her father, Rich Evans, is a mechanical engineer.[7][8] Her mother was once a nun who had left the convent after eight years, being "kicked out" for wild behavior, including owning a red bathing suit.[9] Greer was raised Roman Catholic,[1] and grew up in Redford Township and Livonia.[10] She attended Churchill High School[10] and graduated from The Theatre School at DePaul University in 1997 with a Bachelor of Fine Arts degree.[11] She later adopted her mother's maiden name for her stage name, as there were several other actresses named Judy or Judi Evans.
Read more...

Greer made her film debut in the horror film Stricken (1998), in which she played a college student involved in a fatal prank.[12] This was followed by a small role in the Chicago-filmed drama Kissing a Fool (1998). She was then cast in her first major role as Fern Mayo, a nerdy teenager who uncovers her classmates' murder of their friend, in Darren Stein's black comedy Jawbreaker (1999).[13] The film would go on to earn a cult following.[13] Greer followed this with small parts in the romantic comedy films What Women Want (2000)[14] and The Wedding Planner (2001), opposite Jennifer Lopez.[15] She was cast in a 2002 pilot for NBC alongside Stephen Colbert, Untitled Ken Finkleman Project (Imagine Entertainment), based on the Canadian show The Newsroom from Ken Finkleman. Colbert portrayed Finkleman and Greer played his sister.[9]

In April 2008, Greer appeared as a yoga instructor in the "Get a Mac" ad series featuring John Hodgman and Justin Long.[18] Greer starred in a CBS sitcom entitled Mad Love, which premiered in February 2011 as a mid-season replacement.[19] The show was canceled after the first season.[20]

Greer at Comic-Con International in July 2010

Greer is also a voice actress, voicing the character of Cheryl on the animated comedy series Archer, a character which has been compared to her role on Arrested Development,[21] and the character of Wendy Park on the stop-motion animated sitcom Glenn Martin, DDS.[16] Greer has also portrayed two characters on Two and a Half Men; Bridget Schmidt the ex-wife of Walden Schmidt (Ashton Kutcher), and Myra Melnick, a love interest of Charlie Harper (Charlie Sheen) and the sister of Herb Melnick (Ryan Stiles).[22]

In November 2011, Greer was honored with the Independent Spirit John Cassavetes Award at the Denver Film Festival, where two films featuring Greer were in the festival's programming, including a red carpet screening of Alexander Payne's The Descendants and Jay and Mark Duplass' Jeff, Who Lives at Home. She is the first actress to be honored with the award.[23]

She played the gym teacher Miss Desjardin in the 2013 horror remake Carrie alongside Chloë Grace Moretz and Julianne Moore, and played female chimp Cornelia in Dawn of the Planet of the Apes (2014).[25] In 2014, Greer made her directorial debut, with a short film for AOL, Quiet Time.[26] Greer starred with Nat Faxon in the FX comedy series Married, which premiered in July 2014.[27]

In 2015, Greer co-starred in the films Tomorrowland, Jurassic World and Ant-Man, among others.[28] In 2016, she debuted in the lead voice role of Beep in the Netflix children's animated programs, Ask the StoryBots and StoryBots Super Songs. In 2017, she reprised her role as Cornelia in the film sequel War for the Planet of the Apes,[29] and in 2018, she again played her role as Maggie Lang, in the superhero film Ant-Man and the Wasp. She then co-starred as Karen, the daughter of Laurie Strode, in the 2018 horror sequel film Halloween.

Greer voices the titular character, Luna, in the animated television series Let's Go Luna!, which is set to premiere in November 2018.

Greer is married to Dean E. Johnsen, an executive producer of Real Time with Bill Maher.[30] She is a stepmother to Johnsen's two children from his previous marriage.[31]

Greer grew up Catholic, although at age 10 she convinced her parents let her go to a Presbyterian church, claiming she thought she would be closer to God there. The real reason was that she thought there were cuter boys at that church.[9] During a 2014 interview, Greer stated that she is no longer a practicing Catholic.[32]

In 2014, she told Glamour, "I had been wanting to try and learn how to meditate, and I did research on the different types of meditation. TM seemed the easiest, and I liked that it wasn't religious in any way."[26]