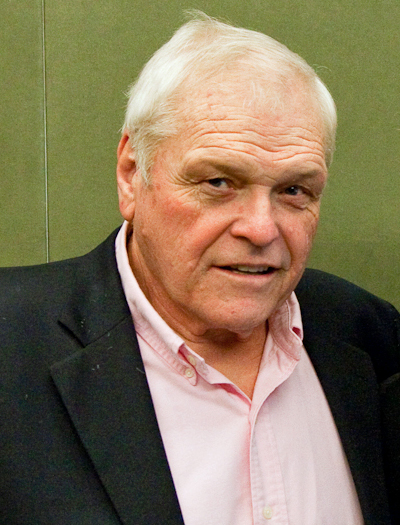 Brian Manion Dennehy[1] (born July 9, 1938) is an American actor of film, stage, and television. A winner of one Golden Globe, two Tony Awards and a recipient of six Primetime Emmy Award nominations, he gained initial recognition for his role as Sheriff Will Teasle in First Blood (1982). He has had roles in numerous films including Gorky Park (1983), Silverado (1985), Cocoon (1985), F/X (1986), Presumed Innocent (1990), Romeo + Juliet (1996), and Knight of Cups (2015). Dennehy won the Golden Globe Award for Best Actor in a Miniseries or Television Film for his role as Willy Loman in the television film Death of a Salesman (2000).

Dennehy was born in Bridgeport, Connecticut, the son of Hannah (Mannion) and Edward Dennehy, a wire service editor for the Associated Press.[2] He has two brothers, Michael and Edward.[3][4] He is of Irish ancestry and was raised Roman Catholic.[5][6] The family relocated to Long Island, New York, where Dennehy attended Chaminade High School in the town of Mineola.[7]

A football scholarship paved the way to Columbia University in New York City, where he played football, earned a BA in history and became a member of the Sigma Chi fraternity. He went on to graduate studies in dramatic arts at Yale University. He played rugby union for Old Blue RFC. Prior to pursuing acting Dennehy worked as a stockbroker for Merrill Lynch in their Manhattan office in the mid 1970s.[8]

Dennehy is primarily known as a dramatic actor. His breakthrough role was as the overzealous sheriff Will Teasle in First Blood (1982) opposite Sylvester Stallone as John Rambo.

His earlier films included several comedies, like Semi-Tough with Burt Reynolds (in which he portrayed a pro football player), Foul Play with Chevy Chase, and 10 with Dudley Moore (as an Acapulco bartender). He later portrayed a corrupt sheriff in the western Silverado and an alien in Cocoon, both released in 1985.

Dennehy gradually became a valuable character actor but also achieved leading-man status in the thriller Best Seller (1987) co-starring James Woods. He also starred in the Peter Greenaway film The Belly of an Architect, for which he won the Best Actor Award at the 1987 Chicago International Film Festival. Commenting upon this unusual venture, Dennehy said, "I've been in a lot of movies but this is the first film I've made."

He went on to star as Harrison in the Australian film The Man from Snowy River II in 1988.

One of his most well-known roles came in the 1995 Chris Farley-David Spade comedy Tommy Boy as Big Tom Callahan. He also was reunited with his 10 co-star Bo Derek in Tommy Boy, in which she played his wife.

Dennehy had a voice role in the animated movie Ratatouille as Django, father of the rat chef Remy. He appeared as the superior officer of Robert De Niro and Al Pacino in the 2008 cop drama Righteous Kill and as the father of Russell Crowe in the 2010 suspense film The Next Three Days.

Dennehy starred as Clarence Darrow in Alleged, a film based on the Scopes Monkey Trial, the famous court battle over the teaching of evolution in American public schools.[9]

Dennehy began his professional acting career in small guest roles in such 1970s and 1980s series as Kojak, Lou Grant, Dallas and Dynasty. He also appeared in an episode of Miami Vice during the 1987-88 season.

Dennehy portrayed Sergeant Ned T. "Frozen Chosen" Coleman in the television movie A Rumor of War (1980) opposite Brad Davis. He continued to appear in such high-profile television films as Skokie (1981), Split Image (1982), Day One, (1989), A Killing in a Small Town (1990) opposite Barbara Hershey. He also played the title role in HBO's Teamster Boss: The Jackie Presser Story.

Dennehy had a lead role as fire chief/celebrity dad Leslie "Buddy" Krebs in the short-lived 1982 series Star of the Family. Despite his star power, that show was canceled after a half a season.

He has starred in the popular crime drama Jack Reed TV movies. He also appeared as a recurring character in the NBC sitcom Just Shoot Me!.

Dennehy was parodied in South Park: Bigger, Longer & Uncut (1999) and an episode of The Simpsons.

In January 2007, he starred in the episode "Scheherazade" of Law & Order: Special Victims Unit as a retired criminal who wants to reconnect with his daughter and admit his crimes before dying of a terminal disease thus eventually clearing a wrongfully imprisoned inmate. In April 2008, Dennehy guest-starred as a Teamster boss in an episode of 30 Rock.

Dennehy guest-starred in a 2009 episode of Rules of Engagement as the father of the main character, Jeff.[10]

Most recently Dennehy starred as Elizabeth Keen's grandfather on the NBC series The Blacklist.

Dennehy has won two Tony Awards, both times for Best Lead Actor in a Play. The first win was for Death of a Salesman (for which he also won a Laurence Olivier Award for the production's London run), in 1999, and the second was for Eugene O'Neill's Long Day's Journey into Night in 2003. Both productions were directed by Robert Falls and were originally produced at the Goodman Theatre company in Chicago.

On stage, Dennehy has made frequent performances in the Chicago theater world, and made his Broadway debut in 1995 in Brian Friel's Translations. In 1999, he was the first male performer to be voted the Sarah Siddons Award for his work in Chicago theater. He made a return to Broadway in 2007 as Matthew Harrison Brady in Inherit the Wind opposite Christopher Plummer, then returned again opposite Carla Gugino in a 2009 revival of Eugene O'Neill's Desire Under the Elms.

In fall 1992, he played the lead role of Hickey in Robert Falls's production of Eugene O'Neill's The Iceman Cometh at the Abbey Theatre in Dublin.[14]

In 2008, Dennehy appeared at the Stratford Shakespeare Festival, in Stratford, Ontario, Canada, appearing in All's Well That Ends Well as the King of France, and a double bill of plays, Samuel Beckett's Krapp's Last Tape and Eugene O'Neill's Hughie, where Dennehy reprised the role of Erie Smith.

In December 2010, he returned to Ireland to play Bull McCabe in the Olympia Theatre of Dublin's stage version of John B. Keane's The Field.[14][16][17]

In 2011, Dennehy returned to the Stratford Shakespeare Festival in the role of Sir Toby Belch in Shakespeare's Twelfth Night. He also played Max in Harold Pinter's The Homecoming, which is the first Pinter work to be produced there.

In April through June 2012, he played the role of Larry Slade in the Eugene O'Neill play The Iceman Cometh at the Goodman Theatre in Chicago,[18] which he reprised in 2015 when the production, with most of the Goodman Theater production cast, was revived at the BAM Harvey Theater in Brooklyn, New York.[19]

In the comic book series Ultimate Spider-Man, that series' version of the villain Norman Osborn was rendered by artist Mark Bagley to resemble actor Brian Dennehy, as per writer Brian Michael Bendis' instructions.[20]

Dennehy is a 2006 album by the rapper Serengeti (real name David Cohn). The album's title track is performed from the point of view of "Kenny Dennis", a Chicago resident and avid sports fan in his 40s whose favorite actors are Brian Dennehy and Tom Berenger. Cohn, watching a broadcast of the Little League World Series in which the competitors were asked their favorite actors and athletes, imagined someone naming Dennehy as his favorite actor. He then used this as the starting point to develop the rest of the Kenny character, which has become a recurring alter ego for Serengeti.[21]

Dennehy enlisted in the United States Marine Corps in 1958 and served on Okinawa[22] until 1963. In numerous interviews, Dennehy claimed to be a Vietnam veteran who served a five-year tour there and recounted harrowing tales of combat,[23] but according to the book Stolen Valor, Dennehy never served in Vietnam and never saw active combat.[23] The author of Stolen Valor wrote to Dennehy regarding the discrepancy, but received no reply from the actor, although Dennehy later admitted in an interview that he had lied about his service and apologized for it.[23]

He has been married twice and has five children including actress Elizabeth Dennehy.[24]