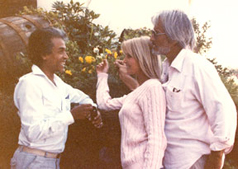 Bo Derek (born Mary Cathleen Collins; November 20, 1956)[2] is an American film and television actress, film producer, and model perhaps best known for her breakthrough role in the 1979 film 10. The film also launched a bestselling poster for Derek in a swimsuit, and subsequently she became one of the most popular sex symbols of the 1980s. She was directed by husband John Derek in Tarzan, the Ape Man (1981), Bolero (1984) and Ghosts Can't Do It (1989), all of which received negative reviews. A widow since 1998, she lives with actor John Corbett. Now in semi-retirement, she makes occasional film, television, and documentary appearances.

I was 16 when I quit high school. I didn't really mean to quit. I spent about a month going to the beach surfing and sunbathing while I was supposed to be in school: when I got caught, my mom was furious. I started to go back to school, and I was really enjoying it, and then I went to go do this film with John in Greece...[3]

While attending Narbonne High School in Los Angeles at age 16 in 1973,[3] Collins became romantically involved with John Derek, a married man 30 years her senior. Not long after the two started dating, Derek divorced his wife, actress Linda Evans. The couple moved to Germany, where John Derek would not be subject to prosecution under California statutory rape laws due to Collins' underage association with him.

In 1973 John Derek began production on a film entitled Fantasies, a low-budget, English-language romantic drama starring Collins and several unknown German actors. The film was shot over a 10-day period in Greece. In an effort to capitalize on Collins' beauty, Derek worked into the film several risqué scenes, including brief nudity. John Derek twice re-edited the film in an effort to sell it to major studios. The film remained unreleased until 1981, at which time it received negative notices.[4]

Collins and John Derek married on June 10, 1976; she was 19 and he 49. By that time Derek had given his young wife a so-called Hollywood makeover: she had bleached her hair blonde and adopted the name Bo Derek.[5] In 1977 director Michael Anderson cast Derek in a small role in his horror film Orca - The Killer Whale (1977), in which Derek has her leg bitten off by the title character.[6]

In 1979 Derek was allegedly selected over Melanie Griffith, Heather Thomas, and several others for the role of Jenny Hanley in the romantic comedy film 10.[7] Directed by Blake Edwards, the film starred Dudley Moore as a middle-aged man who finds Derek's character to be the ideal woman. Derek's appearance in a dream sequence, racing towards Moore in a flimsy flesh-colored swimsuit, became iconic and launched her status as a mainstream sex symbol. This sequence and Derek’s cornrow hairstyle in the film have often been parodied. 10 was a critical and financial success.[8]

After 10, Derek was cast in A Change of Seasons (1980), a dramatic-comedy film that featured Shirley MacLaine and Anthony Hopkins. Derek played a college student who has an affair with her older, married professor. A Change of Seasons was only a moderate box-office success, with critics reviewing it and Derek's performance unfavorably ("The only appealing performance is Miss MacLaine's").[9]

In 1981 Derek appeared in MGM's R-rated Tarzan, the Ape Man, her first leading role in a mainstream Hollywood film. Directed by husband John Derek, the film dealt little with Tarzan and instead focused on Derek's character of Jane Parker, and specifically on Derek's physical attributes. Several scenes of Derek wearing revealing outfits were featured, along with nude scenes of Derek being bathed and body-painted. Prior to the film's release MGM and the film's distributor, United Artists, were sued by the Edgar Rice Burroughs estate over the name of the film, as Derek's role and body overshadowed the story of Tarzan.[11] Although the film received negative reviews from many critics, Tarzan, the Ape Man became a box-office success, making over $35 million in ticket sales and becoming the 15th highest-grossing film of 1981.[12] For her performance, Derek shared the Golden Raspberry Award for Worst Actress with Faye Dunaway, the latter for her starring role as Joan Crawford in Mommie Dearest.

Derek starred in Bolero (1984). Directed by John Derek, the film explored the female protagonist's sexual awakening, and her journey around the world to find an ideal first lover to take her virginity. Its sexual nature, along with its substantial use of nudity, resulted in the film receiving an X rating, usually reserved for pornographic or extremely violent horror films. Critical reviews for Bolero, including Derek's performance, were negative (" would be a lot more appealing if she tried less assiduously to please"),[13] and the film failed to recoup its production costs.[14] For her performance in Bolero Derek won her second Golden Raspberry Award for Worst Actress. The film received other Golden Raspberry Awards: Worst Picture, Worst Director (John Derek), Worst Screenplay (John Derek), Worst New Star (Olivia d'Abo), and Worst Musical Score (Peter Bernstein and Elmer Bernstein).

After a five-year hiatus Derek returned to feature films with the drama/comedy/fantasy Ghosts Can't Do It. The final teaming of Derek with her husband as director, Ghosts Can't Do It was a failure both critically (a "cinematic abomination")[15] and financially.[16] For her performance in Ghosts Can't Do It, during which she delivered such lines as "You have my heart...how can I live without my heart," Derek won her third Golden Raspberry Award for Worst Actress. The film also won Golden Raspberry Awards for Worst Picture, Worst Director (John Derek), and Worst Supporting Actor (Donald Trump).

Following Ghosts Can’t Do It Derek appeared in few films due, in part, to her husband's declining health (he would die in 1998). Derek returned to acting in the television movies Hot Chocolate (1992) and Shattered Image (1994), and the straight-to-video film Woman of Desire (1994). In 1995 Derek appeared in the comedy film Tommy Boy. For that performance Derek was nominated for a Golden Raspberry Award for Worst Supporting Actress but ultimately lost to Madonna for the latter's performance in Four Rooms.

In 1998 Derek guest-starred on four episodes of Wind on Water. In 1999 she appeared on The Drew Carey Show, and in the early 2000s she had guest roles on the shows Family Law, Queen of Swords, Two Guys, a Girl and a Pizza Place, Lucky, Still Standing, and 7th Heaven.

At the 20th Golden Raspberry Awards in 2000, Derek was nominated for Worst Actress of the Century, sharing the nomination with Madonna (the eventual winner), Brooke Shields, Elizabeth Berkley, and Pia Zadora.

Derek appeared in several more feature films during the 2000s, including Frozen with Fear (2000), The Master of Disguise (2002), for which she received her second Golden Raspberry Award for Worst Supporting Actress nomination, and Malibu's Most Wanted (2003). In 2006 Derek starred in 40 episodes of the 65-episode telenovela series Fashion House. Derek had a featured role in the 2015 made-for-TV campy horror film Sharknado 3: Oh Hell No!. Derek was reported to participate in the 2016 Comedy Central roast of Rob Lowe[17] but is absent from the eventual cast list.[18]

Derek, who describes herself as independent with generally more libertarian views, supported George H. W. Bush in 1988 and 1992, and campaigned for his son George W. Bush in 2000 and 2004, and she appeared at both Republican conventions. In a January 2011 interview with The Hollywood Reporter, she said she had voted for Barack Obama in 2008. She has appeared at events with bachelor Republican Congressman David Dreier of Southern California.[19]

When White House Chief of Staff Josh Bolten was asked about his relationship with Derek on the edition of April 30, 2006, of Fox News Sunday with Chris Wallace, Bolten said she was a friend and a "strong supporter of the President".[citation needed] In 2006, she was appointed to the board of trustees of the John F. Kennedy Center for the Performing Arts by President George W. Bush, on the operations committee.[20]

A horse lover and riding enthusiast since childhood, Derek owns Andalusian horses and is a spokesperson for the Animal Welfare Institute's campaign to end horse slaughter through passage of federal and state legislation. On February 5, 2002, she published her autobiography entitled Riding Lessons: Everything That Matters in Life I Learned from Horses (ISBN 0-06-039437-4). She serves on the California Horse Racing Board.

Derek's father, Paul Collins, was a radio operator during the Korean war. Both her stepfather and late husband, John Derek, were veterans.

John and Bo moved to Germany and returned to the United States soon after Bo's 18th birthday; they married in 1976 and remained so until his death from heart failure in 1998.[23] Since 2002, she has been involved with actor John Corbett.[24] She continues to live in California with her sister, brother-in-law, and their two children.[25]