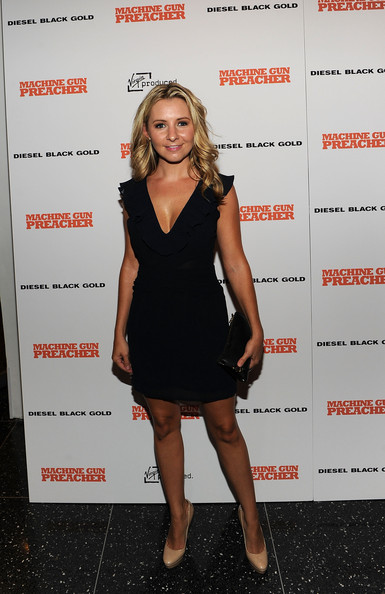 Beverley Ann Mitchell (born January 22, 1981) is an American actress and country music singer. She is best known for her role as Lucy Camden-Kinkirk on the television series 7th Heaven.

Mitchell was born in Arcadia, California, to Sharon Mitchell (née Weisz), an office manager, and David Mitchell, an auto racing promoter. Her parents have since divorced and remarried and she has a half-brother, Giuseppe Tomasino, from her father's second marriage.[citation needed]

After graduating from Chaminade College Preparatory School in 1999, she enrolled at Loyola Marymount University where she majored in film production.[1]

Mitchell's first major film role was in The Crow: City of Angels, playing teenaged drug addict Grace. During the filming of The Crow, in 1996, she auditioned as a child actress for the role of Mary Camden in a new family drama, 7th Heaven. Producers initially turned her down as they did not think she was suitable to play Mary. However, when she read for the part of sister Lucy, she was instantly cast. She is actually 14 months older than Jessica Biel, who played her older sister. 7th Heaven was very popular, lasting for 11 seasons.

In 2000, she had a small part in The Amanda Show as a customer in Moody's Point. She played alongide.

In 2003, Mitchell played Erica Enders-Stevens in the Disney Channel original movie Right on Track, based on the early career of the 2014 NHRA Mello Yello Drag Racing Series Pro Stock champion and her sister Courtney Enders, who was played by Oscar winner Brie Larson.

In 2005, during a hiatus from filming 7th Heaven, Mitchell played Laura Hunter in the horror sequel Saw 2.

Her lifelong dream of becoming a country music singer came true when, in 2006, she recorded her debut album, Beverley Mitchell with record producer D. Scott Miller in Nashville, Tennessee. She co-wrote eight of the songs featured on the album, including the hit single "Angel".

In 2007, Mitchell starred in the TV movie I Know What I Saw, which aired on the Lifetime Television network. She also plans to record a second album, and hopes to record her own version of the song "When You Say Nothing At All" on the album.

In 2010, it was announced that Mitchell would join the cast of The Secret Life of the American Teenager as a school counselor; the show began in January 2008.[2]

In March 2016, she was named to the cast of the cable network series Hollywood Darlings with fellow 1990s child stars Jodie Sweetin and Christine Lakin.[3]

On New Year's Eve 2005, during a trip to Colorado, Mitchell became engaged to her long-time boyfriend, accountant Michael Cameron. They had originally planned to get married in 2007, but decided to put the wedding on hold due to the release of Mitchell's debut album. The wedding took place on October 1, 2008 in Ravello, Italy on the Amalfi Coast. Former 7th Heaven castmates Jessica Biel and Mackenzie Rosman served as bridesmaids.[4][5]

In 1997, Mitchell's 15-year-old friend Angela was killed in a car accident. In her book Chicken Soup for the Preteen Soul, Mitchell described how the death deeply affected her. The 7th Heaven episode "Nothing Endures But Change" was based on her experience.[9] Her hit song "Angel" which is featured on her debut album was also written for her late friend.