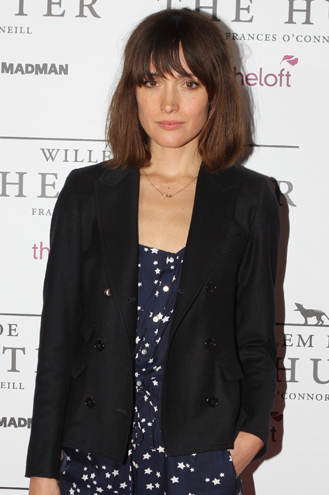 In 2000, she played a leading role in the Australian film The Goddess of 1967, which brought her the Volpi Cup for Best Actress.[5] From 2007 to 2012, she played Ellen Parsons in the cable television series Damages, which earned her two Golden Globe Award and two Primetime Emmy Award nominations. Along with co-star Glenn Close, she appeared in all of the show's fifty-nine episodes. Byrne has also starred in the films Troy, 28 Weeks Later, Knowing, Insidious, X-Men: First Class, X-Men: Apocalypse, as well as the comedies Get Him to the Greek, Bridesmaids, The Internship, Neighbors, Neighbors 2: Sorority Rising, and Spy.

Byrne was born in Balmain, a suburb of Sydney, New South Wales, and is of Irish and Scottish descent.[6][7] She is the daughter of Jane, a primary school administrator, and Robin Byrne, a semi-retired statistician and market researcher.[8] She is the youngest of their four children; she has an older brother, George, and two older sisters, Alice and Lucy. In a 2009 interview, Byrne stated that her mother is an atheist, while both she and her father are agnostics.[9]

Byrne attended Balmain Public School and Hunters Hill High School before attending Bradfield College in Crows Nest.[10] She later moved to Newtown and Bondi.[11] She began taking acting classes at age eight, joining the Australian Theatre for Young People and later attended the University of Sydney.[10] In 1999, Byrne studied acting at the Atlantic Theater Company, which was developed by David Mamet and William H. Macy.[10]

Byrne was cast in her first film role, Dallas Doll, when she was 13 years old.[12] She has appeared in several Australian television shows, such as Heartbreak High and Echo Point, and the film Two Hands with Heath Ledger. She appeared in The Date,[13] My Mother Frank, and Clara Law's The Goddess of 1967, the last of which gained her the Volpi Cup for Best Actress at the 57th Venice International Film Festival in 2000. Byrne revealed in a post-award interview that, prior to winning the Venice Film Festival Award, she was surprised by her own performance and found it confronting watching the film because her acting was "too depressing". Byrne admitted that "watching myself is confronting because I'm convinced I can't act and I want to get out, that's how insecure I am."[5]

Byrne appeared as a guest in an episode of the police drama series Murder Call. On stage, she played a lead role in La Dispute and in a production of Anton Chekhov's classic Three Sisters at the Sydney Theatre Company.[14]

In 2002, Byrne made her first appearance in a Hollywood film with a small role as Dormé, the handmaiden to Natalie Portman's Senator Padmé Amidala, in Star Wars: Episode II - Attack of the Clones. She appeared the same year in City of Ghosts with Matt Dillon. The year previously she had flown to the UK to shoot I Capture the Castle, Tim Fywell's adaptation of the 1948 novel of the same title by Dodie Smith. In the 2003 release, she portrayed Rose Mortmain, the elder sister of Romola Garai's Cassandra. In 2003, she starred in three Australian films: The Night We Called It a Day with Melanie Griffith and Dennis Hopper; The Rage in Placid Lake for which she was named Best Actress at the Australian Film Institute; and Take Away, another comedy. In 2004, Byrne starred as Briseis in Wolfgang Petersen's epic Troy.[15] She then reunited with Peter O'Toole in the BBC TV drama Casanova. Byrne appeared with Snoop Dogg in Danny Green's film The Tenants, based on Bernard Malamud's novel, and starred as Alex with Josh Hartnett and Diane Kruger in the romantic psychological thriller Wicker Park.[16]

From 2007 to 2012, Byrne starred as Ellen Parsons in the FX legal thriller television series Damages, which ran for five seasons.[22][23] She appeared in the Australian film noir The Tender Hook with Hugo Weaving in 2008.

In 2009, Byrne co-starred with Nicolas Cage in the science fiction thriller Knowing. Later that year, she appeared in the indie film Adam, with Hugh Dancy. She appeared in the 2010 comedy film Get Him to the Greek, starring Russell Brand and Jonah Hill, and she was co-lead in the James Wan horror film Insidious, which premiered in September 2010 at the Toronto International Film Festival[24] and received a wide theatrical release on 1 April, 2011.[25] Insidious grossed US$97 million after a production budget of US$1.5 million was invested by filmmakers James Wan and Leigh Whannell.[26]

In 2013, Byrne appeared in the crime drama The Place Beyond the Pines, with Ryan Gosling and Bradley Cooper, and appeared in the comedy, The Internship, opposite Vince Vaughn and Owen Wilson; and The Turning, a short film installment in a Tim Winton omnibus feature.[4] Byrne also played the newlywed wife in I Give It a Year, a comedy about the trials and tribulations of a couple during their first year of marriage.

Byrne worked again with fellow Australians Wan and Whannell for the sequel Insidious: Chapter 2, which was released on Friday, 13 September 2013, and again also featured actors Patrick Wilson and Lin Shaye.[30] The film received mixed reviews from critics[31] and became the biggest opening day in US box office history for the month of September following its release.[32] Insidious: Chapter 2 was a financial success, grossing over US$160 million against a budget of US$5 million.[33]

In 2014, Byrne starred in the comedy film Neighbours, alongside Seth Rogen and Zac Efron. The film received positive reviews and went on to become a box office success.[34][35] A remake of the 1982 classic, Annie, featured Byrne playing the role of Grace Farrell, Mr. Stacks' colleague. Byrne's performance was mostly praised with reviewers calling her the surprise highlight of the movie. In 2015, Byrne co-starred with Melissa McCarthy, Jude Law and Jason Statham in the hit comedic action tale Spy,[36] and in 2016, she reprised her role as Moira MacTaggert in X-Men: Apocalypse.[37]

In 2016, Rebecca Skloot (author of The Immortal Life of Henrietta Lacks) announced that Byrne would be playing Skloot in the HBO film adaptation of her book. The film will also star Oprah Winfrey and Reneé Elise Goldsberry. She will be starring alongside Sandra Bullock, Rachel Weisz, Selena Gomez, Vanessa Hudgens, Zooey Deschanel, and Anna Kendrick in We Are Your Fist.

In 2018, Byrne portrayed Bea and also the voice of Jemima Puddle-Duck in Peter Rabbit.

Byrne has supported UNICEF Australia by being the face of the 2007 Designers United campaign and a member of Tropfest jury in 2006 and Tropfest@Tribeca[39] in 2007. She is a graduate and ambassador for NIDA's (National Institute of Dramatic Art) Young Actors Studio.[40] In 2014, Byrne became the face of Oroton, the Australian producer of luxury fashion accessories.[41]

Byrne was in a relationship with Australian writer, director and actor Brendan Cowell for over six years. Cowell moved from Sydney to New York City, following Byrne's success on Damages. The relationship ended in January 2010.[42]

In 2012, Byrne began dating American actor Bobby Cannavale. In February 2016, she gave birth to their son, Rocco.[43] She and Cannavale had their second child together, son Rafa, in November 2017.[44]

As of 2013, Byrne lived in New York and said she remains insecure about a stable career: "I don't think that insecurity ever leaves you. You're a freelancer. There's always an element of uncertainty."[4]

Report a problem
Write to Rose Byrne at FanPal • 2022