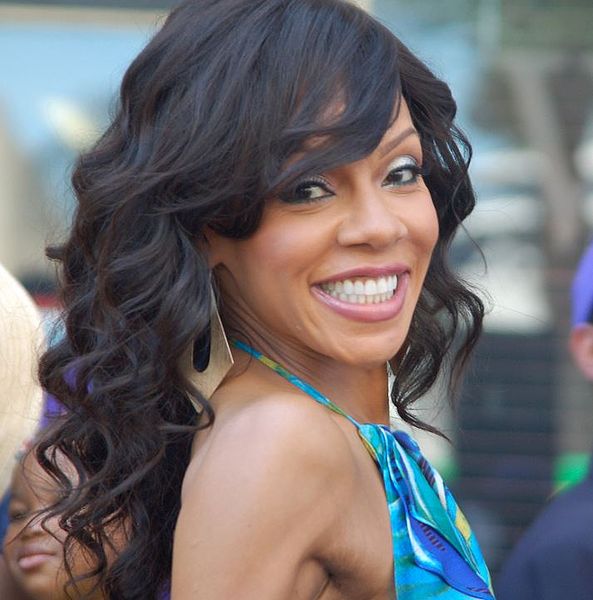 Wendy Raquel Robinson (born July 25, 1967) is an American actress. Robinson is best known for her roles as high school principal Regina "Piggy" Grier on The WB comedy sitcom The Steve Harvey Show (1996–2002), and as sports agent Tasha Mack on The CW/BET sitcom The Game (2006–15).

Robinson was born in Los Angeles. She attended Howard University where she graduated cum laude with a Bachelor of Fine Arts in drama.[1][2] She made her acting debut in 1993 on an episode of Martin. That same year she guest starred on episodes of Thea and The Sinbad Show. From 1995 to 1996, Robinson co-starred on the short-lived NBC sitcom Minor Adjustments, starring Rondell Sheridan. The following year she won the role of Regina "Piggy" Grier in The WB sitcom The Steve Harvey Show which aired for six seasons. After the series ended its run in 2002, she appeared on the short-lived sketch comedy series Cedric the Entertainer Presents with her former Steve Harvey co-star Cedric the Entertainer. Robinson also made guest appearances on The Parkers, All of Us, and The New Adventures of Old Christine. Robinson has also appeared in several films including The Walking Dead, followed by roles in A Thin Line Between Love and Hate (1996), Ringmaster (1998), Two Can Play That Game (2001), and Rebound (2005). In 2000, she played Miss California in the film Miss Congeniality.

In 2006, Robinson began portraying the role of Tasha Mack, in the comedy The Game.[3] After three seasons, the series was canceled by The CW in May 2008.[4] BET struck a deal with The Game's parent company CBS to develop new episodes of the series, relocating taping of the show from Los Angeles to Atlanta,[5] and announcing its renewal at the April 2010 upfronts.[6] The Game returned to the air for a fourth season on January 11, 2011,[7] The series ended in 2015. She also appeared on Shonda Rhimes' Grey's Anatomy in 2010. In 2014, she was cast as Cruella de Vil in the Disney's Descendants.[8][9] In 2017, she has appeared in the film Flatliners, and had a recurring role on the short-lived ABC comedy series, The Mayor.

In 2018, Robinson was cast in the ABC comedy-drama series Grand Hotel opposite Demián Bichir and Roselyn Sánchez.[10][11]

In 1996, Robinson co-founded the Amazing Grace Conservatory,[12] a school that predominately serves children from 8 to 18 years old from disadvantaged socioeconomic backgrounds in the fields of the arts and media production.[13][14] Robinson has served as the school's Executive Director since its inception. The school has provided a safe heaven and training for thousands of young people. Some of the most notable members are: Rhyon Nicole Brown,[15][16][17] Elle Varner,[18][19][20] and Selena Thurmond (Disney correspondent).[21]