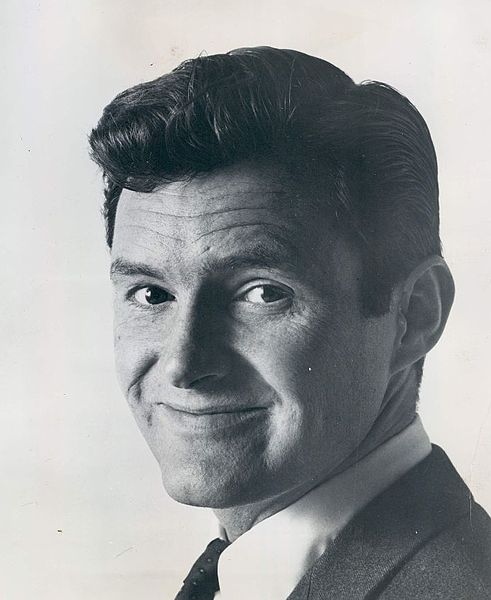 Orson Bean (born July 22, 1928) is an American film, television, and stage actor, as well as a stand-up comedian, writer, and producer. He appeared frequently on televised game shows from the 1960s through the 1980s and was a long-time panelist on the television game show To Tell the Truth.

Orson Bean was born Dallas Frederick Burrows in Burlington, Vermont, the son of Marian Ainsworth (née Pollard) and George Frederick Burrows. His father was a founding member of the American Civil Liberties Union (ACLU), a fund-raiser for the Scottsboro Boys' defense, and a 20-year member of the campus police of Harvard College.[1] Among his other relatives is Calvin Coolidge, who was president of the United States at the time of his birth and was his first cousin twice removed.[2] Dallas graduated from the Cambridge Rindge and Latin School; and between 1946 and the end of 1947, he served 18 months in the United States Army. While stationed in postwar Japan, he developed and refined a magic act during his off-duty hours.

Following his military service, Bean began working in small venues as a stage magician before transitioning in the early 1950s to stand-up comedy. It was during that time when he stopped using his birth name professionally and adopted the stage name Orson Bean. In an interview on The Tonight Show with Johnny Carson in 1974, Bean recounted the source of his new name.[3] He credited its origin to a piano player named Val at "Hurley's Log Cabin", a restaurant and nightclub in Boston, Massachusetts, where he had once performed. According to Bean, every evening before he went on stage at the nightclub, Val would suggest to him a silly name to use when introducing himself to the audience. One night, for example, the piano player suggested "Roger Duck", but the young comedian got very few laughs after using that name in his performance.[3] On another night, however, the musician suggested "Orson Bean", and the comedian received a great response from the audience, a reaction so favorable that it resulted in a job offer that same evening from a local theatrical booking agent. Given his success on that occasion, Bean decided to keep using the odd-sounding but memorable name.[3]

In 1952, Bean made a guest appearance on NBC Radio's weekly hot-jazz series The Chamber Music Society of Lower Basin Street. His vocal mannerisms were ideal for the mock-serious tone of the show, and he became the show's master of ceremonies ("Dr. Orson Bean") for its final season. Bean was a frequent guest on The Tonight Show (with both Jack Paar and Johnny Carson), and appeared on game shows originating from New York. He was a regular panelist on To Tell the Truth in versions from the late 1950s through 1991. On July 5, 1965, his father appeared as a subject of the panel and he had to disqualify himself from participating. Apparently no one knew his real name was Burrows as Kitty Carlisle humorously admitted in her questioning.[4] He appeared on Super Password and Match Game, among other game shows. He hosted a pilot for a revamped version of Concentration in 1985, which was picked up later on in 1987 as Classic Concentration with Alex Trebek.[citation needed]

Although Bean was placed on the Hollywood blacklist for attending Communist Party meetings while dating a member, he continued to work through the 1950s and 60s.[2] He played the title character in the 1960 Twilight Zone episode "Mr. Bevis". In 1961, for the CBS anthology series The DuPont Show with June Allyson, he starred as John Monroe in "The Secret Life of James Thurber", based on the works of the American humorist James Thurber.

On Broadway he starred in the original cast of Will Success Spoil Rock Hunter? in 1955. Then, in 1961, he was featured in Subways Are for Sleeping, for which he received a Tony Award nomination as Best Featured Actor in a Musical, as well as performing in Never Too Late the following year. In 1964, he produced the Off-Off-Broadway musical Home Movies—which won an Obie Award—and the same year appeared in the Broadway production I Was Dancing. [5] He also starred in Illya Darling, the 1967 musical adaptation of the film Never on Sunday.

Bean was a regular in both Mary Hartman, Mary Hartman and its spin-off Fernwood 2Nite. He also portrayed the shrewd businessman and storekeeper Loren Bray on the television series Dr. Quinn, Medicine Woman throughout its six-year run on CBS in the 1990s. He played John Goodman's homophobic father on the sitcom Normal, Ohio. He played the main characters Bilbo and Frodo Baggins in the 1977 and 1980 Rankin/Bass animated adaptations of J.R.R. Tolkien's The Hobbit, and The Return of the King. He also played Dr. Lester in Spike Jonze's 1999 film, Being John Malkovich.[citation needed]

Bean appeared as a patient in the final two episodes of 7th Heaven's seventh season in 2003. In 2005, Bean appeared in the sitcom Two and a Half Men in an episode titled "Does This Smell Funny to You?", playing a former playboy whose conquests included actresses Tuesday Weld and Anne Francis. He appeared in the 2007 How I Met Your Mother episode "Slapsgiving" as Robin Scherbatsky's 41-year-old boyfriend, Bob. In 2009 he was cast in the recurring role of Roy Bender, a steak salesman, who is Karen McCluskey's love interest on the ABC series Desperate Housewives. At the age of 87, Bean in 2016 appeared in "Playdates", an episode of the American TV sitcom Modern Family. He appeared in a 2017 episode of Teachers (TV Land, season 2, episode 11, "Dosey Don't"). He appeared as the elderly Holocaust survivor in the 2018 film The Equalizer 2.[6]

An admirer of Laurel and Hardy, Bean, in 1964, served as a founding member of The Sons of the Desert, the international organization devoted to sharing information about the lives of Stan Laurel and Oliver Hardy and studying and enjoying their films.

Bean wrote an autobiographical account about his life-changing experience with the orgone therapy developed by Austrian-born psychoanalyst Wilhelm Reich. Published in 1971, the account is titled Me and the Orgone: The True Story of One Man's Sexual Awakening. [7]

He has been married three times. His first marriage was in 1956 to actress Jacqueline de Sibour, whose stage name was Rain Winslow and who was the daughter of the French nobleman and pilot Vicomte Jacques de Sibour and his wife, Violette B. Selfridge (daughter of British department-store magnate Harry Gordon Selfridge).[8][9][10] Before their divorce in 1962, Bean and Jacqueline had one child, Michele. [11]

In 1965, he married fashion designer Carolyn Maxwell with whom he had three children: Max, Susannah, and Ezekiel.[12] The couple divorced in 1981. Their daughter Susannah married conservative commentator Andrew Breitbart (died 2012) in 1997. Bean's third wife is actress Alley Mills, 23 years his junior. They married in 1993, and live in Los Angeles.[11] Since 2008, Bean has been a regular guest on the Dennis Miller radio show, stating that he is a Christian of orthodox beliefs and very thankful for the career success he has had.[citation needed]