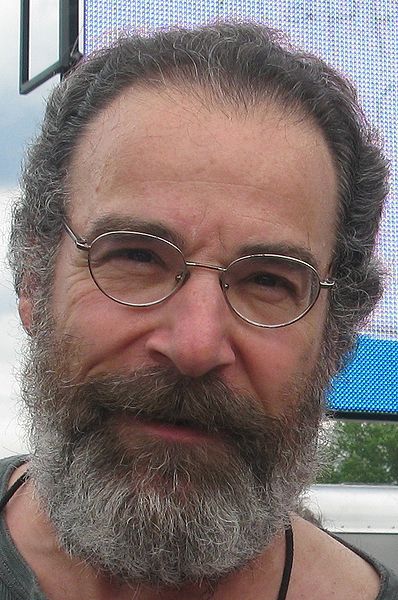 Patinkin is well known for his portrayal of Inigo Montoya in the 1987 movie The Princess Bride. His other film credits include Yentl (1983), Alien Nation (1988), Dick Tracy (1990),[3] and Wish I Was Here (2014). He has appeared in major roles in television series such as Chicago Hope, Dead Like Me, and Criminal Minds, and currently plays Saul Berenson in the Showtime series Homeland.

He is a noted interpreter of the musical works of Stephen Sondheim and is known for his work in musical theater, originating iconic roles such as Georges Seurat in Sunday in the Park with George and Ché in the original Broadway production of Evita.

Patinkin grew up in an upper-middle-class family, descended from Jewish emigrants (from Russia and Poland), and was raised in Conservative Judaism,[2][7][8] attending religious school daily "from the age of seven to 13 or 14" and singing in synagogue choirs, as well as attending the Camp Surah in Michigan.[2]

He attended South Shore High School, Harvard St. George School, and Kenwood High School (later renamed Kenwood Academy), and graduated in 1970.[9] He attended the University of Kansas and the Juilliard School (Drama Division Group 5: 1972-1976).[10] At Juilliard, he was a classmate of Kelsey Grammer. When the producers of the popular American sitcom Cheers were holding auditions for the role of Dr. Frasier Crane, Patinkin put Grammer's name forward.[11]

After some television commercial and radio appearances (including the CBS Radio Mystery Theater in 1974), Patinkin had his first success in musical theater,[1] where he played the part of Che in Evita on Broadway in 1979.[12] Patinkin went on to win the 1980 Tony Award for Best Performance by a Featured Actor in a Musical.[1][2][12] He then moved to film, playing parts in movies such as Yentl[2] and Ragtime. He returned to Broadway in 1984 to star in the Pulitzer Prize-winning musical Sunday in the Park with George,[13] which saw him earn another Tony Award nomination for Best Actor (Musical).[2][13]

Patinkin played Inigo Montoya in Rob Reiner's 1987 The Princess Bride,[2] and found his studies a huge asset in The Princess Bride, playing the role of the best swordsman in the country, short of the main character, and part of his role included proficiency in fencing at a professional level. Over the next decade, he continued to appear in movies, such as Dick Tracy and Alien Nation.[3]

In 1994, Patinkin took the role of Dr. Jeffrey Geiger on CBS's Chicago Hope[2] for which he won an Emmy Award. However, despite the award and the ratings success of the show, Patinkin left the show during the second season because he was unhappy spending so much time away from his wife and children.[17] He returned to the show in 1999 at the beginning of the sixth season, but it was later canceled in 2000. Since Chicago Hope, Patinkin has appeared in a number of films. However, he has mostly performed as a singer, releasing three more albums. In 1995, he guest-starred in The Simpsons in the episode "Lisa's Wedding" as Hugh Parkfield, Lisa's future English groom.

Mamaloshen, Patinkin's musical production of songs sung entirely in Yiddish, premiered in 1998. He has performed the show on Broadway and in venues around the United States. The recorded version won a Deutscher Schallplattenpreis award in Germany.[18]

In 1999, Patinkin co-starred in the second and final Sesame Street film The Adventures of Elmo in Grouchland as Huxley, a cruel, abusive, childish, villainous and greedy man with abnormally large eyebrows, who steals whatever he can grab and then claims it as his own.[19] Patinkin returned to Broadway in 2000 in the New York Shakespeare Festival production of John LaChiusa's The Wild Party, earning another Tony Award nomination for Best Actor (Musical).[20] In 2003-2004 he appeared in the Showtime comedy-drama Dead Like Me as Rube Sofer. In 2004 he played a six-week engagement of his one-man concert at the Off-Broadway complex Dodger Stages.

In September 2005, Patinkin debuted in the role of Jason Gideon, an experienced profiler just coming back to work after a series of nervous breakdowns, in the CBS crime drama TV show Criminal Minds.[1]

Patinkin was absent from a table read for Criminal Minds and did not return for a third season. The departure from the show was not due to contractual or salary matters, but over creative differences. He left apologetic letters for his fellow cast members explaining his reasons and wishing them luck. Many weeks before his departure, in a videotaped interview carried in the online magazine Monaco Revue, Patinkin told journalists at the Festival de Télévision de Monte-Carlo that he loathed violence on television and was uncomfortable with certain scenes in Criminal Minds. He called his choice to do Criminal Minds his "biggest public mistake," and stated that he "thought it was something very different. I never thought they were going to kill and rape all these women every night, every day, week after week, year after year. It was very destructive to my soul and my personality, and after that, I didn't think I would get to work in television again."[21]

He spoke of having planned to tour the world with a musical and wanting to inject more comedy into the entertainment business.[22] In later episodes, during the 2007-08 season, Jason Gideon was written out of the series and replaced by Special Agent David Rossi (played by Joe Mantegna). Gideon was later officially killed off, ending all chances of a guest appearance by Patinkin on the show.

On October 14, 2009, it was announced that Patinkin would be a guest star on an episode of Three Rivers, which aired on November 15, 2009. He played a patient with Lou Gehrig's disease injured in a car accident who asks the doctors at Three Rivers Hospital to take him off life support so his organs can be donated. He filmed an appearance on The Whole Truth that had been scheduled to air December 15, 2010, but ABC pulled the series from its schedule two weeks prior.[23]

He starred in the new musical Paradise Found, co-directed by Harold Prince and Susan Stroman, at the Menier Chocolate Factory, London. The musical played a limited engagement from May 2010 through June 26, 2010.[24]

Patinkin and Patti Lupone performed their concert An Evening with Patti Lupone and Mandy Patinkin on Broadway for a limited 63-performance run starting November 21, 2011, at the Barrymore Theatre, and which ended on January 13, 2012. This concert marks the first time the pair has performed together on Broadway since they appeared together in Evita.[25][26]

He currently costars with Claire Danes on the Showtime series Homeland which initially aired in 2011.[27][28] He portrays counterterrorism operative Saul Berenson, protagonist Carrie Mathison's (Danes) mentor. For his performance, Patinkin has been nominated for a Golden Globe and an Emmy Award, among other honors. Explaining what he learned from the character, he stated that "The line between good and evil runs through each one of us."[29]

Patinkin was announced as playing the role of Pierre in the hit Broadway musical Natasha, Pierre & The Great Comet of 1812 starting August 15, 2017.[30] He would have a limited run through September 3, replacing former Hamilton star Okieriete Onaodowan.[31] The role was originated by Josh Groban. Patinkin later dropped out of the role.[32]

In 2018, Patinkin returned to recorded music with the album Diary: January 27, 2018 which was produced by pianist Thomas Bartlett.[33]

On June 15, 1980, Patinkin married actress and writer Kathryn Grody. They have two sons named Isaac and Gideon. Gideon joined his father onstage in Dress Casual in 2011.[34] Patinkin has described himself as "Jewish with a dash of Buddhist" belief. On the Canadian radio program Q, Patinkin describes himself as a "JewBu" because of this mix of beliefs[35] and "spiritual but not religious."[36]

Patinkin suffered from keratoconus, a degenerative eye disease, in the mid-1990s. This led to two corneal transplants, his right cornea in 1997 and his left in 1998.[37] He was also diagnosed with and treated for prostate cancer in 2004.[38] He celebrated his first year of recovery in 2005 by doing a 265-mile (426 km) charity bike ride with his son, Isaac - the Arava Institute Hazon Israel Ride: Cycling for Peace, Partnership & Environmental Protection.[39]

Patinkin has been involved in a variety of Jewish causes and cultural activities. He sings in Yiddish, often in concert, and on his album Mamaloshen.[40] He also wrote introductions for two books on Jewish culture, The Jewish American Family Album, by Dorothy and Thomas Hoobler, and Grandma Doralee Patinkin's Holiday Cookbook: A Jewish Family's Celebrations, by his mother, Doralee Patinkin Rubin.

In May 2012, Patinkin delivered the opening speech at the Annual Convention of the Israeli Left, where he recounted his experiences during a visit to the West Bank with members of the Breaking the Silence organization.[41]

Patinkin contributed to the children's book Dewey Doo-it Helps Owlie Fly Again: A Musical Storybook, inspired by Christopher Reeve. The award-winning book, published in 2005, benefits the Christopher Reeve Foundation and includes an audio CD with Patinkin singing and reading the story as well as Dana Reeve and Bernadette Peters singing.[42]

On December 21, 2015, Patinkin was on the Charlie Rose program on PBS talking about his recent trip to Greece to help refugees from war-torn Syria and his acting role on the television series Homeland. He stated that he wanted to help "create opportunity and better systems of living and existing, to give freedom, justice and dignity, quality of life to humanity all over the world."[43]

Report a problem
Write to Mandy Patinkin at FanPal • 2022