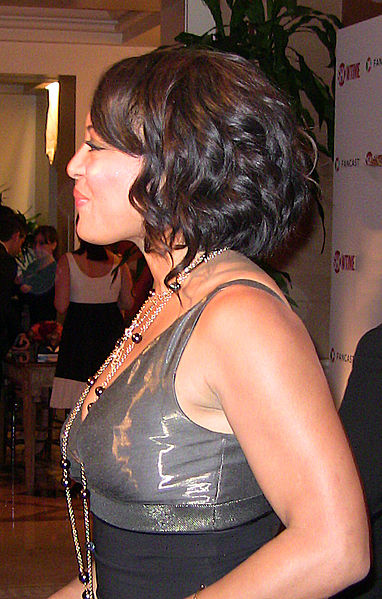 Lauren's parents moved from Puerto Rico in the early 1950s and lived in Brooklyn, a borough of New York City, where she and her twin sister, Loraine Vélez, were born. The twins have five other sisters and one brother. Lauren's father, a New York City Police Department officer, eventually bought a house in Far Rockaway, Queens, and moved the family there. The twins enjoyed setting up improvised plays and acting for the family, and they participated in nearly all their high school productions, such as, Fiddler on the Roof. After graduating from high school, they each received scholarships to attend the Alvin Ailey Dance School. They both went on to study acting at the Acting Studio with its founding artistic director James Price, the protégé and personal friend of Sanford Meisner. In addition, Lauren studied Shakespeare with Michael Howard.[3]
Read more...

Vélez landed her first job performing in the national touring company of the musical Dreamgirls. Vélez also played understudy for actress Phylicia Rashad in Stephen Sondheim's Into the Woods, and she performed Off-Broadway in the productions of Much Ado About Nothing.

In 1995, Vélez landed her first major television role. She was cast as Nina Moreno, a policewoman in the TV series New York Undercover.[4] That same year, she also made her film debut as Lisette Linares in the movie I Like It Like That, alongside Rita Moreno and Jon Seda.[5] She was nominated for the Independent Spirit Award and The Desi Award for Best Lead Actress. The movie was nominated for four Independent Spirit Awards and won an NYFCCA award. Another TV series in which she performed was HBO's jail drama, Oz. She also acted in the feature film City Hall (1996), with Al Pacino. In 1997, Vélez starred in Buscando un Sueño (English: In Search of a Dream), the first Spanish language film sanctioned by SAG. Vélez again played a police lieutenant, in a supporting role on Showtime's series Dexter.[6]

On June 24, 2006, she won the Best Supporting Actress award at the 2006 Long Island International Film Expo for her performance as Roseanne Crystal in the independent feature film, Serial.[4]

In 2010, she received the Rita Moreno HOLA Award for Excellence from the Hispanic Organization of Latin Actors (HOLA).