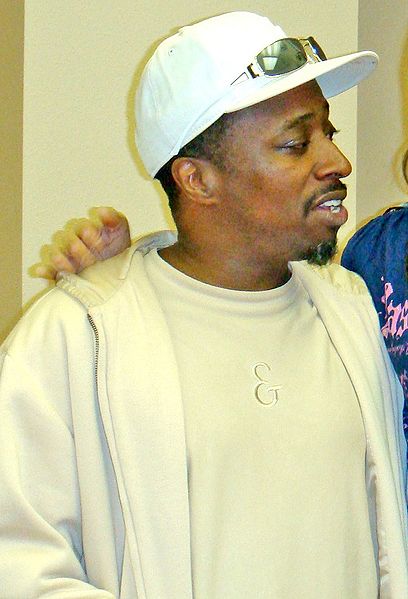 Griffin was born in Kansas City, Missouri, and was raised by his single mother, Doris Thomas, a phone company operator.[1] His family were Jehovah's Witnesses.[2] In 1984, at 16 years old, he moved to Compton, California to live with his cousins. in 1986, after graduating from Compton High, Griffin enrolled as a biological engineering major at Kansas State University, but later left in 1988 and moved to New York City to pursue a career in comedy. Griffin did not see his mother for four years, after Griffin and his mother got into an argument at his 20th birthday party, where Griffin's mother accused him of stealing jewelry from her, which Griffin denied doing. Griffin later moved back to Los Angeles, California in March 1992, to be closer with his family when his mother was injured in a car accident.[3]
Read more...

Griffin was ranked at number 62 on Comedy Central's list of the 100 Greatest Stand-ups of All Time.[4] In 2011 Comedy Central released You Can Tell 'Em I Said It on DVD. It was 82 minutes of unedited and uncensored content.

Griffin performed on two tracks from Dr. Dre's 1999 album, 2001, and the intro track from The D.O.C.'s 1996 album Helter Skelter. He also has appeared on commercials for Miller Beer's Man Laws. He is well known for his comedic routine of imitating Michael Jackson on crack cocaine. He also made an appearance on Chappelle's Show in the skit "World Series of Dice" as Grits n' Gravy.

Griffin has been married three times. He married his first wife, Carla, in 1984; he was 16 years old.[5] He married his second wife, Rochelle, in 2002,[5] but they have since divorced. On September 8, 2011, he married Nia Rivers.[6] However, they filed for divorce after one month of marriage, citing irreconcilable differences. They were officially divorced six months later.[7]

In March 2007,[8] Griffin participated in a charity race at Irwindale Speedway to promote the film Redline, using a Ferrari Enzo owned by Daniel Sadek. During a practice run, Griffin accidentally hit the gas pedal instead of the brake and lost control of the Enzo, crashing hard into a concrete barrier.[8] He walked away unscratched, but the $1.5 million supercar was badly damaged.[8] Griffin later criticized reporters who suggested the crash was a publicity stunt.[9]

During the sexual assault allegations on Bill Cosby, Griffin suggested that Cosby was the victim of a conspiracy to destroy his image and that several other prominent African-American men had been victims of similar conspiracies.[10]

Report a problem
Write to Eddie Griffin at FanPal • 2022