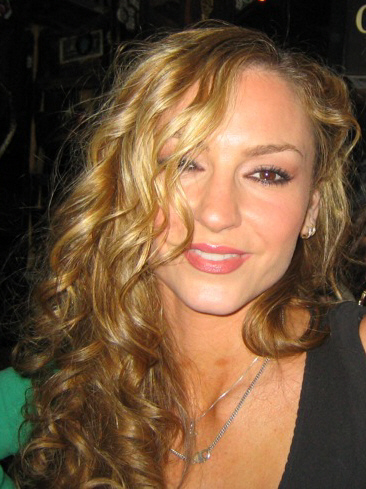 Andrea Donna de Matteo (/dreɪ də məˈteɪoʊ/; born January 19, 1972) is an American actress, known for her roles as Angie Bolen on ABC's Desperate Housewives, Joey Tribbiani's sister Gina on the NBC sitcom Joey, Wendy Case on FX series Sons of Anarchy, and Adriana La Cerva on the HBO drama series The Sopranos, a role for which she won a Primetime Emmy Award for Outstanding Supporting Actress in a Drama Series. She played Det. Tess Nazario in NBC's Shades of Blue.

De Matteo, of Italian descent,[1][2] was born in Whitestone, Queens, New York. Her mother, Donna, is a playwright and playwriting teacher, and her father, Albert, is a furniture manufacturer who was owner and CEO of Avery Boardman and Carlyle.[3][4] She grew up in a Roman Catholic family.[2][5]
Read more...

After graduating from the Loyola School, she studied at New York University's Tisch School of the Arts, originally hoping to become a director, not an actress. De Matteo's role in The Sopranos was one of her earliest, helping to launch her career. She has appeared in several films including Swordfish, Deuces Wild, The Perfect You, Prey for Rock & Roll and the 2005 remake of John Carpenter's 1976 action film Assault on Precinct 13. She had the starring role in Abel Ferrara's R Xmas for which she received some very positive reviews.[6]

From 2004 to 2006, de Matteo portrayed Joey Tribbiani's sister Gina in the Friends spin-off Joey. The show was cancelled after two seasons.[8]

De Matteo played the role of Wendy Case in the FX original series Sons of Anarchy. The pilot episode aired September 3, 2008, and De Matteo continued making regular appearances into the series' sixth season.[9] She was promoted to a series regular for the seventh and final season.[10]

De Matteo played the stepmother of Steve Wilde, the main character of the FOX comedy Running Wilde, appearing in Season 1, Episode 9. De Matteo co-starred as Krissi Cates in the film adaptation of Dark Places (2015), with Charlize Theron, Chloë Grace Moretz, and Nicholas Hoult.[16] In 2015, she was cast as Det. Tess Nazario in the NBC drama series Shades of Blue, starring alongside Jennifer Lopez and Ray Liotta. It premiered on January 7, 2016.

In 1997, de Matteo opened Filth Mart, an East Village clothing store with her then-boyfriend Michael Sportes.[17] They closed the store in 2004.[18]

De Matteo lost her apartment home of 22 years, as did dozens of other residents, when a gas explosion and raging fire destroyed three New York City buildings on March 26, 2015.[23]