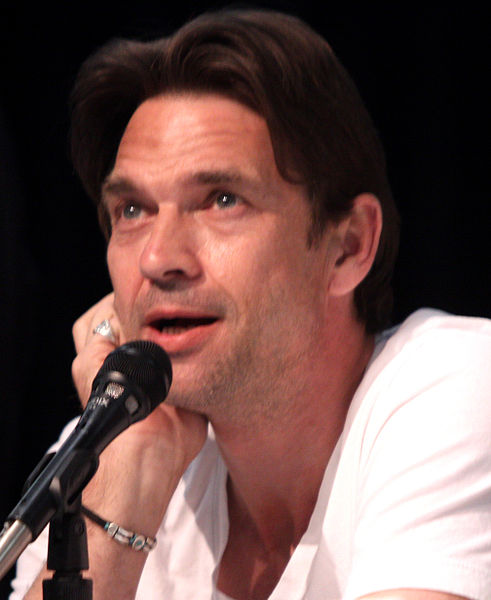 Scott was born 26 November 1965[1] in Glenrothes, Fife, the son of Elma, a nurse, and Alan Scott, a travelling salesman of refrigerators and freezers, and a former actor.[2][3] He attended Auchmuty High School. Adopting his stage name from his grandmother's surname, "Dougray", he enrolled in a foundation course in drama before going on to attend the Royal Welsh College of Music & Drama in Cardiff from 1984 to 1987; here, he earned the college's Most Promising Drama Student award. In 1988, he moved to London.[4]
Read more...

Scott began his acting career in national theatre, television, and puppet shows. He appeared in his first role on the television series Soldier Soldier and made his film debut in Twin Town. His first major film roles were as Prince Henry in Ever After and the hero in the film adaptation of the Robert Harris novel Enigma. In 2000, he signed up to play the villain in Mission: Impossible 2 (hand-picked by star Tom Cruise).[citation needed] He was going to play Wolverine in the feature film version of X-Men. When Mission: Impossible 2 went over schedule and he was injured in a motorbike accident, he was forced to drop out of the project and was replaced by Hugh Jackman in X-Men.[5]

After the 2002 release of Die Another Day, Scott was a candidate to replace Pierce Brosnan as James Bond.[6] Despite the numerous reports that Eon Productions was leaning towards naming Scott as the new Bond in the 007 adventure Casino Royale, the role eventually went to Daniel Craig. In January 2006, he appeared in the miniseries The Ten Commandments as Moses. He also appeared in the NBC series Heist, which aired in March 2006 for five episodes. From 2006 until 2007, he starred in the third season of Desperate Housewives as Teri Hatcher's character's new love interest. In 2007, he played the primary antagonist in the film Hitman, based on the Hitman video games. He appeared in the title role(s) of a modern re-telling of Dr. Jekyll and Mr. Hyde. In May 2009, it was announced that he was to play ex-con Michael O' Connor in the new RTÉ-ITV drama Father & Son.

Scott starred in The Day of the Triffids.[7] The drama was broadcast in December 2009 as part of the BBC 1 Christmas schedule.[8] In 2011, Scott featured in the film Love's Kitchen alongside his wife Claire Forlani, who played his love interest in the film. On the opening weekend in the UK it took just £121 in June 2011.[9] In April 2011, Scott portrayed football manager Matt Busby in the BBC TV drama United, which was centred on the Munich air disaster of 1958, in which Busby was badly injured but survived.[10] Busby's family were reportedly "incensed" by Scott's portrayal, with Busby's son commenting that his father's character "had the appearance of a gangster rather than a football manager" and wore an overcoat and trilby hat instead of a tracksuit, despite Busby famously being the first "tracksuit" manager of the post-World War II era.[11] In 2013, he guest starred as para-psychological researcher/ghost hunter Alec Palmer in the Doctor Who episode "Hide".

In March 2016, Scott became the voice of Orby in adverts for British oil and gas company BP.[13]

In April 2016, Scott appeared in the second season of Fear the Walking Dead playing the character Thomas Abigail, the business partner and lover of Strand.[14]

Scott is the father of twins, Eden and Gabriel Trevis Scott (b. 1998), with former wife Sarah Trevis.[15] On 8 June 2007, he married actress Claire Forlani in Italy.[16] They have an adopted son named Milo,[17] born 27 December 2014. Dougray is also a fan of scottish football team Hibernian FC.

Scott at the 2013 WonderCon

Report a problem
Write to Dougray Scott at FanPal • 2022