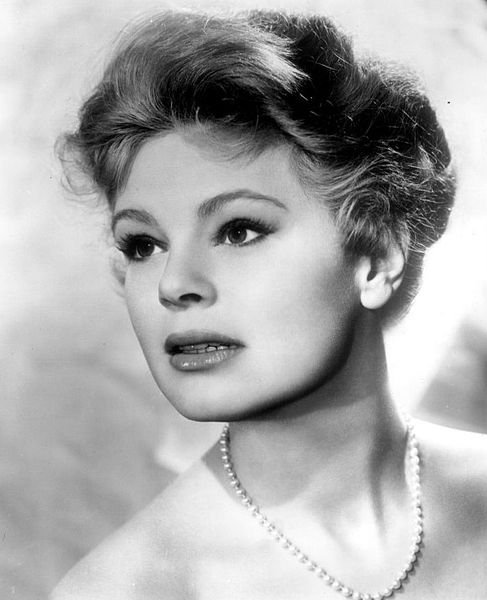 Betsy Palmer (born Patricia Betsy Hrunek; November 1, 1926 - May 29, 2015) was an American actress, known as a regular supporting movie and Broadway actress and television guest star, as a panelist on the game show I've Got a Secret, and later for playing Jason Voorhees' mother, Pamela Voorhees, in the popular slasher film Friday the 13th (1980).

Palmer was born Patricia Betsy Hrunek on November 1, 1926,[3] in East Chicago, Indiana, the daughter[4][5] of Marie (née Love), an adoptee, who launched the East Chicago Business College before she married,[6][7][8][1][9] and Rudolph Vincent Hrunek,[10][11] an industrial chemist who was an immigrant from Czechoslovakia,[12][13][14][15] who became a stay at home father.[16] They moved to Hessville and she attended Warren G Harding Elementary School in Hammond, Indiana, living an A Christmas Story childhood.[16] She performed in school plays all through childhood.[16] She graduated from East Chicago's Roosevelt High School in 1944,[9] attended East Chicago Business College. She then worked as a stenographer and secretary for the car foreman on the RIP track of the B&O Railroad. She hated it, she said, because she was shut off from people.[17] Some time after Palmer took an aptitude test at the Chicago YWCA, which indicated a flair for The Arts, her father brought a coworker home for dinner, a former New York actor who recommended she study with David Itkin at DePaul University.[18][19][20][21][22][23][24][25][19][26][17][16] Working days and commuting to night classes from East Chicago, she graduated from the Goodman School of Drama (now called The Theatre School) at DePaul University.[16][27][28][29]

Palmer began working, in summer stock, in Lake Geneva, Wisconsin, then winter stock at The Woodstock Opera House in Woodstock, Illinois with Paul Newman, and then summer stock, in Chicago with Imogene Coca. Having saved $400 she told her parents she was changing her name to Betsy Palmer and moving to New York City with Sasha Igler, who had a job in advertising.

Palmer got her first television acting job in 1951 when she joined the cast of the 15-minute weekday television soap opera Miss Susan, which was produced in Philadelphia, and all actors traveled each day from New York City by train.[30][9] She was "discovered" for this role, by Norman Lessing, while attending a party in the apartment of actor Frank Sutton who was married to Toby Igler, the sister of Palmer's roommate, Sasha Igler. She had been in Manhattan less than one week.

A life member of The Actors Studio,[31] Palmer's stage work included a tour of South Pacific (as Nellie Forbush) and a summer-stock season in the title role in Maggie, the 1953 musicalization of What Every Woman Knows by William Roy and Hugh Thomas.

In 1953, she created the role of Virginia in the original teleplay version of Paddy Chayefsky's Marty. Also in 1953 she appeared in a Studio One television broadcast of Hound-Dog Man with Jackie Cooper and others.[32] She would become a familiar face on television as a news reporter on Today in 1958 (the Today Girl), and a long-running regular panelist on the quiz show I've Got a Secret. She joined the show's original run, replacing Faye Emerson in 1958 and remaining until the show's finale in 1967. She did not reprise her role in any of the various revivals of the show. Palmer was the last surviving member of the I've Got a Secret first version's cast.

Palmer starred alongside Anthony Perkins and Fonda again in the Paramount production of The Tin Star (1957).[33]

In 1958, she played undercover agent Phyllis Carter/Lynn Stuart in the film The True Story of Lynn Stuart, co-starring Jack Lord and featuring Kim Spalding as her husband, Ralph Carter.

Palmer appeared in seven Broadway shows. All the original productions had short runs, but she replaced other actresses in long-run shows, notably Lauren Bacall in Cactus Flower in 1967, and Ellen Burstyn in Same Time Next Year in 1977. In 1976 Palmer was the actress whom Tennessee Williams chose to embody the frustrated lead, Alma Winemiller, in his The Eccentricities of a Nightingale.[34]

Palmer's Mercedes-Benz stopped working on the highway to her home in Connecticut after a performance in New York City, arriving home at five o'clock in the morning, so she resolved to replace her car, and later, her daughter suggested that the Volkswagen Scirocco was a cute car and it was $10,000. The offer of $1000 a day for ten days work on location at a Boy Scout camp in New Jersey, to fund the car purchase, was a reason for taking her most famous recent role, Friday the 13th. She recounted, in an interview, that her initial reaction to the experience was: "What a piece of shit! Nobody is ever going to see this thing."[35] Despite her distaste for the film, she reluctantly consented to a cameo appearance in Friday the 13th Part 2. She ultimately came to accept and celebrate her participation in the franchise, as it made her more famous rather than infamous. Palmer was asked to reprise her role as Mrs. Voorhees in Freddy vs. Jason in 2003 and agreed to return, but ultimately turned down the role after being offered a surprisingly low salary.[36]

In 1982 Palmer created the role of "Suzanne Becker" on the CBS daytime soap opera As the World Turns. From 1989 to 1990, the actress appeared on Knots Landing as Virginia "Ginny" Bullock, the aunt of Valene Ewing (played by series star Joan Van Ark). Palmer acted in a Mayfield Dinner Theatre production of On Golden Pond in Edmonton, Alberta, in 1997.

In 2002, Palmer provided the voice of the title character, the ghost of a witch, for the horror film Bell Witch: The Movie, released in 2007.

Palmer dated James Dean[30] and worked on Studio One together.

Palmer married Dr. Vincent J. Merendino, M.D., an obstetrician-gynecologist, in 1954, whom she met in New York on a blind date.[41] They divorced in 1971, after 17 years of marriage. They had one child.

Report a problem
Biography of Betsy Palmer at FanPal • 2022