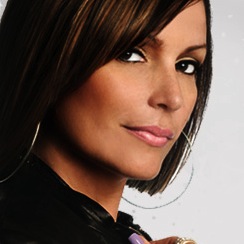 Angela "Angie" Martinez (born January 9, 1971) is an American radio personality, rapper, and actress of Puerto Rican, Cuban and Dominican heritage.[1] Nicknamed “The Voice of New York”, her afternoon radio show has consistently been ranked #1 with more young listeners than any other radio program in the country.[2]

Angie Martinez got her first break in radio at the age of 16 answering hot lines at the urban radio station WQHT ("Hot 97"). There she met popular DJ Funkmaster Flex, and began working as his protégé. Martinez quickly picked up on the craft of running a successful radio program. She hosted the Afternoon Drive weekdays, alongside HOT 97's DJ Enuff, where she interviewed the biggest names in music such as Jay Z and Mariah Carey. She resigned from Hot 97 on June 18, 2014.[3] She was announced to have signed on with Hot 97's main New York radio competitor, Power 105.1 (WWPR-FM) on June 19, 2014.[4]
Read more...

As an actress, Angie received small roles in independent hip hop films such as Blood is Thicker Than Water and Paper Soldiers.[5] She then appeared in Brown Sugar[6] starring Taye Diggs, Queen Latifah and Sanaa Lathan. In October 2002, Martinez appeared in Paid In Full. More recently, she appeared in Video Girl in 2011, Generation Um... in 2012, and in the docu-comedy television series This Is Hot 97 in 2014.

In 1996, Martinez was encouraged to give rapping a shot by friend KRS-One. She appeared on his track "Heartbeat" from his 1997 album I Got Next.[7] After the song gained a strong fan following, another friend, Lil' Kim, offered her a spot on the "Ladies Night Remix" of her song "Not Tonight" for the Nothing to Lose soundtrack.[8] Along with Missy Elliott, Lisa "Left Eye" Lopes and Da Brat, the ladies enjoyed one of the most successful singles of 1997. It peaked on the Billboard Hot 100 chart at #6,[9] and reached #3 on the Hip-Hop / R&B charts.[10] The single sold over 1,000,000 copies and was certified Platinum.[11] The ladies were nominated for two Grammy Awards that year, and were also invited to perform the song live on the MTV Video Music Awards.[12]

A major label battle began to sign Martinez to a recording contract. Her appearance on other rapper's material was in high demand. She recorded songs with Mary J. Blige ("Christmas in the City"[13] ), Cuban Link ("Freak Out"), N.O.R.E. ("Oh No Remix"[14] ), Beenie Man ("Tell Me Remix"[15] ) and Funkmaster Flex & Big Kap's compilation album The Tunnel ("Wow"[16] ). She also recorded interludes for mixtapes by Kid Capri, DJ Clue and DJ Kayslay. In 2001, she appeared in the music video for Jay-Z and R. Kelly's "Guilty Until Proven Innocent".[17]

On April 17, 2001, she finally released her delayed debut album, Up Close and Personal.[18] The album included production by DJ Clue, Salaam Remi, Knobody and RocWilder among others, and featured guest appearances by Jay-Z, Snoop Doggy Dogg, Mary J. Blige, Wyclef Jean, Busta Rhymes and Kool G. Rap. The first single, "Dem Thangzzz" was produced by The Neptunes, and also featured background vocals by Pharrell Williams and Q-Tip. The album debuted at #32 on the Billboard 200 Albums Chart,[19] and #7 on the Billboard Top R&B/Hip-Hop Album Chart[20] selling 69,000 its first week. The second single, "Coast 2 Coast" (Suavamente) featuring rapper Wyclef Jean re-sparked interest in the album.[21][unreliable source?] She promoted the album with magazine posters, in-store signings, club appearances and television appearances with MTV and BET.

Following her first album's release, Angie began work on a second record, 2002's Animal House. In order to build anticipation for the record, she appeared on BET's Rap City[22] and began a nationwide radio tour. She recorded a verse for the remix to her artist Sacario record "Live Big". It became the number one record in the tri-state area and coincidentally coincided with the release of Martinez's first single from her second album, "If I Could Go" which also featured Sacario and singer Lil' Mo. "If I Could Go" became a huge crossover hit on pop radio, climbing into the top 20 on The Billboard Hot 100 Chart.[23] It became the #1 played on urban radio in 2002. The album, Animal House (named after Martinez's own production company and recording posse), was released on August 21, 2002. It entered the Billboard Hot 200 Albums Chart at #11,[19] and the Billboard Hot Hip-Hop / R&B Charts selling 92,000 units in its first week. The follow-up single, "Take You Home" featuring R&B singer Kelis became a minor hit reaching the top 100 on the Billboard Hot 100.[24] The album was more strongly received by critics and fans. Following the release of the album, she was featured on a remix for labelmate Lil' Mo's track "Gangster", and Nina Sky's hype single "Time to Go". Following this she announced she was retiring from the recording industry to concentrate on her other projects.[25]

In 2002, Martinez was hired to be a judge on the second season of American Idol, but quit after a few days of auditions, citing discomfort with crushing the dreams of auditioners.[26]

In November 2014, Martinez was signed to Jay-Z's Roc Nation.

In 2014, Martinez supported CC Sabathia's charity, the PitCCh In Foundation, by running in the 2014 New York City Marathon.[30]