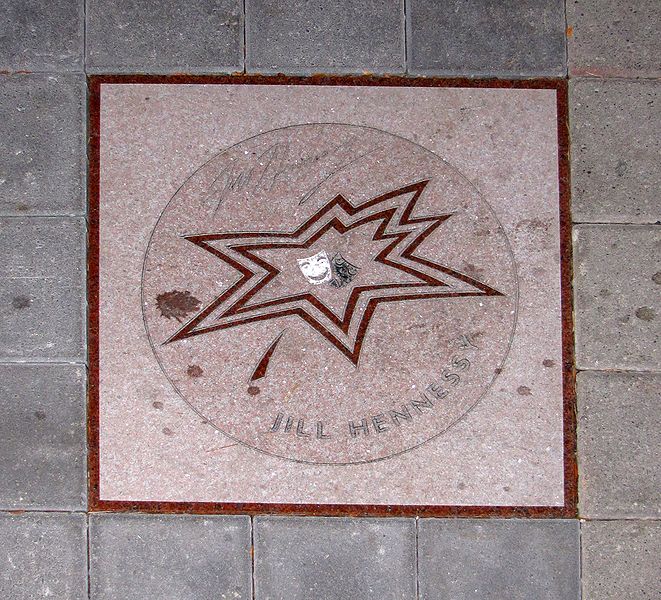 Jillian Noel Hennessy (born November 25, 1968) is a Canadian actress and musician. She is most known for her roles on the American television series Law & Order, on which she played prosecutor Claire Kincaid for three seasons, and Crossing Jordan, on which she played the lead character, Jordan Cavanaugh, for six seasons. She has also acted in films such as RoboCop 3 and Most Wanted, and the independent films Chutney Popcorn and The Acting Class, the latter of which she also wrote and co-directed.

Hennessy was born in Edmonton, Alberta. Her father, John Hennessy, was a meat salesman and sales/marketing executive, a job that required considerable travel and resulted in frequent moves for the family. Her mother, Maxine, a secretary, left the family in 1982, leaving her daughter to be partially raised by her paternal grandmother, Eleanor, in Kitchener, Ontario.[1] She has a younger brother, John Paul "J.P." Hennessy, Jr., and an identical twin sister, Jacqueline, who is a magazine writer and TV show host in Canada. Hennessy has Irish, French, Swedish and Italian ancestry on her father's side, and mostly Ukrainian Roma, as well as Austrian, ancestry on her mother's.[2] She attended Stanley Park Senior Public School, then graduated from Grand River Collegiate Institute in Kitchener, Ontario[3] and used to busk in the Toronto subway.[4]
Read more...

Hennessy and her sister played twin call girls in 1988's Dead Ringers, in which both debuted. She was short listed for the role of Dana Scully on The X-Files according to Gillian Anderson, the actress who eventually got the role.[5]

She appeared on Broadway in the musical Buddy - The Buddy Holly Story in 1990.

In 1993, Dick Wolf signed Hennessy as assistant district attorney Claire Kincaid in the NBC crime drama Law & Order. She played the role for three seasons, ultimately leaving the show in 1996, her last installment being one in which Kincaid was killed in a car crash.

In 1999, she appeared as Lisa in Chutney Popcorn. In 2000, Hennessy wrote, produced, and jointly directed (with Elizabeth Holder) an independent film mockumentary titled The Acting Class, which looked at the trials and tribulations of a dysfunctional acting class. The film co-starred her identical twin sister Jacqueline, and included cameo appearances from a number of Hennessy's former Law & Order co-stars. She also starred in the film Nuremberg, as Elsie Douglas.

In 2001, she portrayed Jackie Kennedy in the film Jackie, Ethel, Joan: The Women of Camelot, and, in 2003, made a cameo appearance in the film Abby Singer. From 2001 to 2007, she starred on the TV show Crossing Jordan as title character Jordan Cavanaugh. She also played the wife of Tim Allen's character in the 2007 film Wild Hogs. On June 9, 2007, she received a star on Canada's Walk of Fame.

During sessions in Austin, Texas, Hennessy recorded the album Ghost in My Head,[6] which was released in June 2009. She performed as a guest of the Indigo Girls on a November 2009 show of Mountain Stage[7] and was the focus of a show for herself later that same month.[8] She performed on the Village Stage of the 2010 edition of Lilith Fair.[9]

Hennessy starred in the independent crime thriller, Small Town Murder Songs, in 2010. She also appeared as a veterinarian in the HBO series Luck, while serving as an endorser of Zaxby's "Zalads" in a pair of television commercials during 2012.

In 2015, Hennessy appeared in several episodes of Madam Secretary.[10][11] In October of that year, her second album, I Do, was released.[4]

In 2018, she appeared on the Michael Weatherly series Bull (2016 TV series) as the mother of the deceased hacker character Cable McCrory. [12]

Hennessy is multi-lingual, speaking English, Italian, French, Spanish and German. Hennessy plays the guitar and sings, and enjoys riding motorcycles with her husband, Paolo Mastropietro, to whom she has been married since 2000. They had a second marriage ceremony in January 2001, which took place at New York City Hall with Mayor Rudy Giuliani officiating. Their son, Marco, was born on September 17, 2003; and a second son, Gianni, was born on November 21, 2007.

The Minneapolis-based band Mollycuddle wrote the song "The Ballad of Jill Hennessy" in honor of the actress.[13] Hennessy was reportedly very pleased and offered to perform with the band on rhythm guitar.[14]