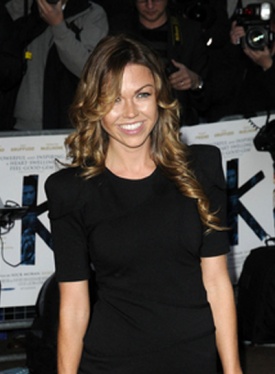 Adele Silva (born 19 November 1980) is an English actress. She played the role of Kelly Windsor in the ITV soap opera Emmerdale on and off from 1993 to 2011. In 1989, she had a minor role in the final classic series Doctor Who story Survival, playing Squeak.

Silva was born in Norbury, London and was educated at the Sylvia Young Theatre School.[1] Her first television appearance was as Squeak in part 3 of the 1989 Doctor Who story Survival, which was the final episode transmitted in the original series' 26-year run. She also appeared in Mr Majeika, The Bill and EastEnders.

Silva is most famous for playing the role of Kelly Windsor in the television soap opera Emmerdale, which she first played this role from 1993 to 2000 before returning to the soap in 2005.[2] Her plotlines have been amongst the most daring in the soap opera, including a relationship with her stepbrother and running off with one of her school teachers. When Silva returned in 2005, she promised to be the "biggest bitch" in British soap.[2]

During her period away from Emmerdale, Adele Silva appeared on Is Harry on the Boat?, Mile High, The Courtroom, the independent film Jam and Lily Savage's Blankety Blank.[3] Silva became established as a sex symbol and has appeared in men’s magazines like Front, FHM and Maxim.[4] Silva has also made appearances in the reality television shows Celebrity Fear Factor, The Salon, I'm Famous and Frightened! and Celebrity 5 Go Dating.

Silva left Emmerdale in late 2007 to pursue other roles,[5] initially promising fans that she would return to play Kelly in late 2008, although it was reported in January 2008 that she would not be returning to the show "in the immediate future."

Silva appeared in the third series of Hell's Kitchen where she came second to Barry McGuigan.[2] Silva had a lead role in the short film Karma Magnet alongside Gary Kemp, which was directed by Martin Kemp.[6] Silva also appeared on Celebrity Weakest Link, which she won.

In September 2008, following her success in Hell's Kitchen, Silva released her own limited edition selection of wines as part of a new Internet reality show "Mistress of the Vines", in association with wine merchants Stowell's. She also made a cameo in the cult horror film Doghouse starring Danny Dyer and Noel Clarke. Silva took part in a celebrity version of TV show Total Wipeout which aired on 26 December 2009. In 2011, Silva starred in the comedy/horror film Strippers vs Werewolves with Robert Englund and guest-starred in romcom How to Stop Being a Loser opposite Richard E. Grant. Silva appeared in an episode of The Real Hustle.

In July 2015, Silva appeared in the Channel 4 soap opera, Hollyoaks, for a guest stint as Angela Brown, who expressed an interest in adopting her relative, Peri Lomax's (Ruby O'Donnell), baby daughter Steph.

She has since relocated to Hollywood where she hopes to get a career. In early 2017, she was seen working as a shop assistant in a Ted Baker store.

Silva had a long term relationship with Blue singer Antony Costa, which ended in November 2006.[2] Since, Silva became engaged to Oliver Farber and suffered three miscarriages. On 25 March 2015, Silva gave birth to her first child: a girl named Sienna Farber.[9]