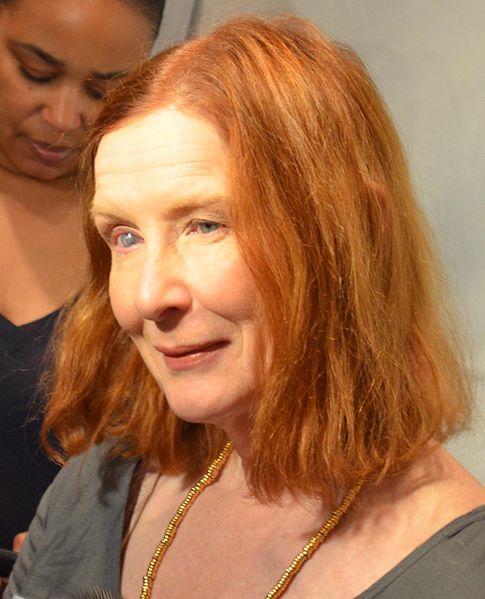 Frances Hardman Conroy[1][2] (born November 13, 1953) is an American actress. She is best known for playing Ruth Fisher on the television series Six Feet Under. Her work on the show won her acclaim and several awards, including a Golden Globe and three Screen Actors Guild Awards. She is also known for playing the older version of Moira O'Hara in season one of the television anthology series American Horror Story, which garnered Conroy her first Saturn Award for Best Supporting Actress on Television nomination, and as well an Emmy nomination for Outstanding Supporting Actress in a Miniseries or a Movie. Conroy subsequently portrayed The Angel of Death, Myrtle Snow, Gloria Mott, Mama Polk and Bebe Babbitt on six further seasons of the show - Asylum, Coven, Freak Show, Roanoke, Cult, and Apocalypse, respectively. Conroy and co-star Lily Rabe have appeared in the most seasons of the show after Evan Peters and Sarah Paulson. For her performance in Coven, she was nominated again for a Primetime Emmy Award for Outstanding Supporting Actress in a Miniseries or a Movie.

She starred in the first season as Dawn in the Hulu original series Casual, which was nominated for a Golden Globe Award for its first season. In 2017, she starred as Nathalie Raven in The Mist.

Conroy was born in Monroe, Georgia, the daughter of Ossie Hardman (née Ray) and Vincent Paul Conroy.[3] Her father, who was of Irish descent, was a business executive, and her mother also worked in business.[4] During the 1971-72 school year, she was a student at Dickinson College in Carlisle, Pennsylvania, where she was a member of the Mermaid Players and appeared in college theatrical productions. She moved to New York City to study drama at the Neighborhood Playhouse and the Juilliard School. She was a member of Juilliard's Drama Division Group 6 (1973-1977)[5] which also included Kevin Conroy (no relation), Kelsey Grammer, Harriet Sansom Harris, and Robin Williams.[6]
Read more...

During the 1970s, she performed regularly with regional and touring theatrical companies (most notably The Acting Company), and appeared as Desdemona at the Delacorte Theatre in a production of Othello with Richard Dreyfuss and Raul Julia. One of her first film appearances was as a Shakespearean actress in Woody Allen's 1979 classic, Manhattan. In 1980, she made a very well received Broadway debut in Edward Albee's The Lady From Dubuque. She focused primarily on her stage career for the next two decades, appearing in such productions as Our Town, The Little Foxes, and The Ride Down Mt. Morgan, receiving one Tony and four Drama Desk Award nominations (including a Drama Desk win for The Secret Rapture). Conroy had a small role in the 1984 movie Falling in Love, as a waitress in a swanky restaurant. In 1988, she appeared as the elder daughter of Burt Lancaster's dying patriarch in Rocket Gibraltar. That same year, she appeared in supporting roles in Dirty Rotten Scoundrels and Another Woman. In 1992, she played the political science teacher Christine Downes in the film Scent of a Woman.

She is best known for her critically acclaimed work on HBO's original drama series Six Feet Under, which she starred in from 2001 and the series' end in 2005, playing the emotional family matriarch Ruth Fisher. During the series' run, Conroy won the Golden Globe Award for Best Actress - Television Series Drama in 2004. She was also nominated for four Primetime Emmy Award for Outstanding Lead Actress in a Drama Series awards, without winning. Along with the cast of the show, they were awarded two times in 2003 and 2004 the Screen Actors Guild Award for Outstanding Performance by an Ensemble in a Drama Series, as well as Conroy winning the individual 2004 award for Outstanding Performance by a Female Actor in a Drama Series.[7] The series ended in 2005, having aired 63 original episodes.

In 2008, she landed a guest role in ABC's Desperate Housewives as Virginia Hildebrand, a rich woman who tries to buy the Solis family's love.

Along with many guest appearances on television in the mid-2000s, she was cast in a recurring role on How I Met Your Mother, as Barney Stinson's mother Loretta Stinson. And in 2010, Conroy portrayed the character Angie Dinkley in the animated show Scooby-Doo! Mystery Incorporated.

In 2011, she was cast in a new drama series for FX entitled American Horror Story. Conroy was one of two actresses, the other being Alexandra Breckenridge, playing a woman named Moira O'Hara. When the season came to an end in 2011, it was announced that the show was intended to be an anthology series, in which each season would be completely different with new characters each season. During this time, Conroy was nominated for a fifth Primetime Emmy Award in the Outstanding Supporting Actress in a Miniseries or a Movie category.

For the second season, dubbed Asylum, Conroy re-joined the cast playing The Angel of Death in a multi-episode arc. And in 2013, she guest starred on Royal Pains; portraying Blythe Ballard. She also co-starred in the television movie Ring of Fire, where she played Maybelle Carter. Conroy was once more cast for American Horror Story's third season during this time, Coven, being promoted to series regular, playing Myrtle Snow, a member of the Witches Council in New Orleans, Louisiana. She was subsequently nominated for a sixth Primetime Emmy Award and her second nomination for Outstanding Supporting Actress in a Miniseries or a Movie. In 2014, she returned for the fourth season of the series, entitled Freak Show, as Gloria Mott, a wealthy woman whose son wants to join the freak show, later returning in the 2016 season, Roanoke, as a cannibalistic hillbilly. As of 2015, Conroy starred as Dawn on the Hulu original series Casual. In July 2017, it was announced via Twitter that Conroy would appear in American Horror Story: Cult, marking her sixth appearance on the show.[citation needed]. In July 2018, it was announced that Conroy had finalized a deal to appear in the 2019 film Joker an original story film of the Batman supervillain The Joker.[8]On August 7, 2018, Ryan Murphy announced via Twitter that Conroy would appear in American Horror Story: Apocalypse, marking her seventh appearance on the show.[9]

Main article: List of awards and nominations received by Frances Conroy
Report a problem
Write to Frances Conroy at FanPal • 2022