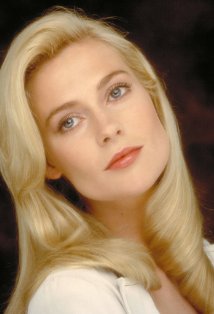 Alison Doody (born 11 November 1966) is an Irish actress and model. After making her feature film debut with a small part in Bond film A View to a Kill (1985), she went on to play Nazi-sympathising archaeologist Elsa Schneider, in Indiana Jones and the Last Crusade (1989). Other roles include Siobhan Donavan in A Prayer for the Dying (1987), Charlotte in Taffin (1988) and Rebecca Flannery in Major League II (1994).

The youngest of three children, Doody was born in Dublin, Ireland. Her mother, Joan, was a beauty therapist, and her father Patrick, worked in the property business and farmed.[1] Doody attended Mount Anville Secondary School.
Read more...

Approached by a photographer, Doody took up modelling, which turned into a career in commercial modelling. Doody stringently avoided glamour and nude work — a clause which she extended to her acting career.[citation needed]

Having come to the attention of the casting director of a new James Bond film, she accepted a small part as Jenny Flex in 1985's A View to a Kill. Doody was listed as one of 12 Promising New Actors of 1986 in John Willis' Screen World, Vol. 38. Still only 18 when she appeared in the role, Doody was - and remains - the youngest Bond girl to date.[2] Another early movie was a small part as IRA member Siobhan Donovan in A Prayer for the Dying (1987), which starred Mickey Rourke.

Doody had a non-speaking role in the 1987 television adaptation of The Secret Garden appearing as Archibald Craven's wife, Lilias, in his dream. Her first lead role was in a 1988 episode of Jim Henson fantasy series The Storyteller as Sapsorrow, opposite John Hurt, Dawn French and Jennifer Saunders.

She played opposite Pierce Brosnan in the film Taffin (1988) before taking probably her most high-profile part to date, as Austrian Nazi-sympathiser and archaeologist Dr. Elsa Schneider in 1989's Indiana Jones and the Last Crusade playing opposite Harrison Ford. The film also starred Sean Connery as Indy's father; Doody has acted alongside three actors (Moore, Connery, and Brosnan) who have portrayed James Bond.

In 1991 Doody co-starred opposite Jonathan Pryce in British mini-series Selling Hitler, inspired by the publishing fraud known as the Hitler Diaries. She subsequently relocated to Hollywood.[citation needed] Chosen to replace Cybill Shepherd as spokeswoman for L'Oréal,[citation needed] she went on to play opposite Charlie Sheen in 1994's Major League II as Flannery, his girlfriend and agent.

After almost a decade away from the screen, Doody returned to acting with a small role in 2003 British comedy movie The Actors with Michael Caine, playing herself in an award ceremony scene.[3] She played alongside Patrick Swayze in a 2004 television movie adaptation of King Solomon's Mines and also starred in a short called Benjamin's Struggle (2005),[citation needed] a pamphlet about the Holocaust, and in the British TV series Waking the Dead (in a two-part episode called "The Fall"). In 2010, Doody shot a part in Danny Dyer's film The Rapture (2010). She later guest starred in RTÉ's medical drama The Clinic.[citation needed], and was set to star in a 2011 remake of horror classic The Asphyx, but the project later stalled.

In 2011 she began the first of two seasons on E4 comedy drama Beaver Falls, playing Pam Jefferson. In 2014 she appeared in We Still Kill the Old Way.

During the 2011 filming of comedy-drama Beaver Falls in South Africa, Doody met Douglas De Jager, a packaging tycoon from Cape Town. The couple had been keeping their relationship low-key, before De Jager died of a heart attack in July 2012.[7]