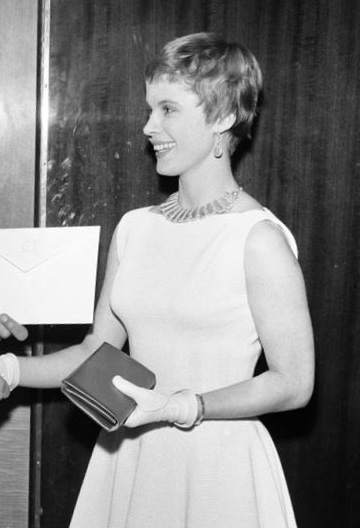 Andersson was born in Kungsholmen, Stockholm, the daughter of Karin (née Mansion), a social worker, and Josef Andersson, a businessman.[1][2][3] She studied acting at the Terserus Drama School and at the legendary Royal Dramatic Theatre School in Stockholm.

After completing school, she agreed to join the Royal Dramatic Theatre in Stockholm, which she was associated with for 30 years. Her first collaboration with Ingmar Bergman was in 1951, when she participated in his production of an advertisement for the detergent "Bris". In the 1950s, 1960s and 1970s, she starred in more than ten Bergman-directed pictures, including The Seventh Seal, Wild Strawberries, Brink of Life, The Magician, The Passion of Anna, The Touch and Persona.

In 1963 at the 13th Berlin International Film Festival, Andersson won the Silver Bear for Best Actress award for her role in Vilgot Sjöman's film The Mistress.[4]

Her intense portrayal of the nurse Alma in the 1966 film Persona led to an increase in the number of cinematic roles offered her, and she appeared that same year opposite James Garner and Sidney Poitier in the violent western Duel at Diablo. For her role in Persona, she won the award for Best Actress at the 4th Guldbagge Awards.[5] More Bergman collaborations followed, and she also worked with John Huston (The Kremlin Letter: 1970) and Robert Altman (Quintet: 1979). She made her debut in American theatre in 1973 with a production of Erich Maria Remarque's Full Circle. Her most famous American film is I Never Promised You a Rose Garden (1977), that also starred Kathleen Quinlan.

In 1990, she worked as a theatre director in Stockholm. In the late 1980s and early 1990s, Andersson worked primarily in television and as a theatre actress, working with Bergman among others. She was also a supervisor for the humanitarian project Road to Sarajevo.

In 1996, she published her autobiography Ett ögonblick (A Moment, or, literally, A Blink of the Eye). She has been married (1960, divorced) to the director Kjell Grede with whom she has a daughter, Jenny, and, secondly (1978, divorced), to the politician and writer Per Ahlmark. Since 29 May 2004, Andersson has been married to Gabriel Mora Baeza. In 2009 she suffered a massive stroke. An article from 2010 says that she had since been hospitalized, unable to speak.[6]