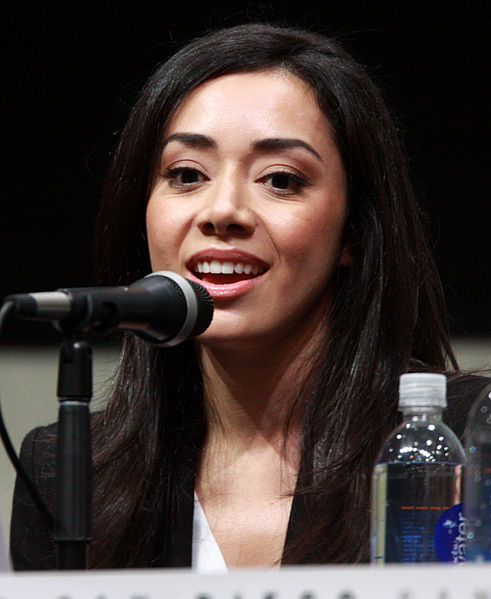 Aimee Garcia (born November 28, 1978) is an American actress. She is known for her television roles as Veronica Palmero on the ABC sitcom George Lopez, Yvonne Sanchez on the CBS period drama Vegas, Jamie Batista on the Showtime drama Dexter and Ella Lopez on the Fox drama Lucifer.

Aimee Garcia was born in Chicago, Illinois.[1] Her mother, Eloisa, is from Pachuca, Hidalgo, Mexico, and graduated from Northwestern University's dental school; her father, Hector, is from San Juan, Puerto Rico, and was in the U.S. Armed Forces.[1][2] Garcia started acting in commercials as a child, and participated in theatre at seven years old.[2][3] She grew up in Oak Park, Illinois, where she attended Fenwick High School.[1][2] While in school, she took acting classes at Piven Theatre Workshop.[3] She appeared in local plays and musicals during her time at Northwestern University, where she triple majored in economics, journalism, and French.[2] After graduating, she quit acting for a year and did finance work for a mutual fund analyst in Brooklyn, New York.[2] Unsatisfied with the job, she moved to Los Angeles, California, around 2002 to pursue acting as her career.[2]
Read more...

She was cast as Maria on The WB's Greetings from Tucson and appeared in the Global Frequency television pilot as Aleph. She had a role in the Disney Channel original movie Cadet Kelly (2002), and co-starred, as Lydia, alongside Anthony Anderson in The WB sitcom All About the Andersons. In 2006, she began appearing on the series George Lopez, playing Lopez's niece.

Garcia starred alongside Jessica Simpson in the comedy-drama Major Movie Star (2008). She also played a brief part in the movie D-War (2007) and narrated the Adam Sandler film Spanglish (2004).

From 2009 to 2010, she was in the cast of the Peter Berg NBC medical drama Trauma, as EMT helicopter pilot Marisa Benez.

Garcia spent three years on Showtime's Dexter as Jamie Batista, for which she was nominated for a SAG Award for Best Ensemble in Dramatic Television Series.[4]

In 2016, Garcia was added to the main cast for season two of the Fox TV series Lucifer, playing LAPD forensic scientist Ella Lopez.[6]

Garcia at the San Diego Comic Con International on July 18, 2013

Report a problem
Write to Aimee Garcia at FanPal • 2022