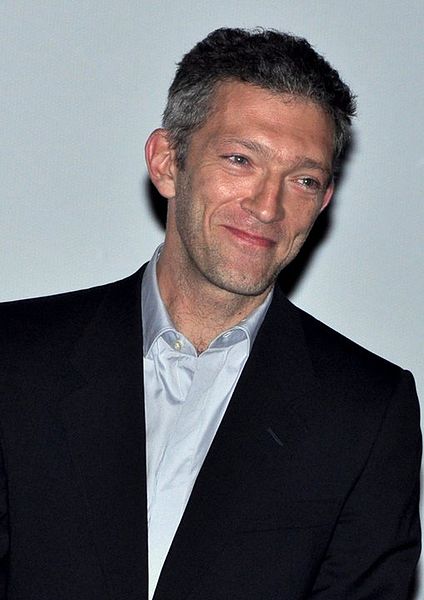 Vincent Cassel (born Vincent Crochon, 23 November 1966) is a French actor. He first achieved recognition for his performance as a troubled French Jewish youth, in Matthieu Kassovitz's 1995 film La Haine (Hate), for which he received two César Award nominations. He garnered wide recognition with English-speaking audiences for his performances in Ocean's Twelve (2004) and Ocean's Thirteen (2007), as well as Eastern Promises (2007), Black Swan (2010), and Jason Bourne (2016). Cassel is also renowned for playing the infamous French bank-robber Jacques Mesrine in Mesrine: Killer Instinct and Mesrine: Public Enemy Number One (both in 2008).

Throughout his career, which spans more than three decades, Cassel has earned critical acclaim and numerous accolades, including a César Award in 2009 and a Canadian Screen Award in 2016.

Cassel was born in Paris, France, to journalist Sabine Litique and actor Jean-Pierre Cassel (born Jean-Pierre Crochon).[1][2] Cassel's brother, Mathias, is a rapper with the group Assassin under the name "Rockin' Squat".[3] His half-sister, Cécile Cassel, is an actress.[4]
Read more...

One of Cassel's first on screen appearances was a bit part in a 1994 Renault Clio advert which was used in the UK.[3]

Cassel's breakthrough role was in Mathieu Kassovitz's critically acclaimed film La Haine (1995), in which he portrayed a troubled youth living in the deprived outskirts of Paris. For his role in La Haine, Cassel was nominated for two César Awards, for Best Actor and Most Promising Actor.[5]

Throughout the 1990s and the early 2000s, Cassel performed in a string of French films. In 1996, he starred opposite Monica Bellucci (before they married) in the moody French film L'Appartement.[3] The film was a critical success, winning a BAFTA Award for Best Film Not in the English Language and the first British Independent Film Award for the Best Film in a Foreign Language. The film was also a modest hit in France gaining 55,565 admissions its opening weekend and 152,714 admissions total.[6] Although the film was never released theatrically in the United States, it was released on DVD on August 22, 2006.

In 1998, he portrayed Henry, Duc d'Anjou in Elizabeth. In 1999, he portrayed Gilles de Rais in Luc Besson's The Messenger: The Story of Joan of Arc. Other notable roles during this period of his career include the violent film Dobermann (1997), the genre-bending Le Pacte des Loups (2001), and the highly controversial Irréversible (2002), where he appears fully nude (with Monica Bellucci, after they married).

In 2007, Cassel attracted significant critical acclaim for his performance in David Cronenberg's thriller film Eastern Promises, in which he starred opposite Viggo Mortensen and Naomi Watts. The film premiered September 8, 2007 at the 2007 Toronto International Film Festival where it won the Audience Prize for best film on September 15, 2007.[7] Film Journal International critic Doris Toumarkine dubbed Cassel's performance "particularly delicious".[8] J. Hoberman of The Village Voice wrote that "Cassel literally flings himself into ".[9]

In October 2008, Cassel was signed to be the face of a new Yves Saint Laurent men's fragrance. The new fragrance, La Nuit de l'Homme, was launched worldwide in 2009.

Cassel appeared in a two-part film about Jacques Mesrine, who was France's "public enemy number one" in the seventies.[3] He won the César Award for Best Actor for his performance as Mesrine. Also that year, he starred in the Portuguese-language, Brazilian film Adrift (À Deriva), and made his debut as a singer on Zap Mama's album ReCreation, singing alongside them on the singles "Paroles, Paroles" and "Non, Non, Non".

The following year, in 2010, Cassel played Thomas Leroy in Darren Aronofsky's critically acclaimed Black Swan (2010), alongside Natalie Portman and Mila Kunis, which attracted considerable acclaim. For his performance in Black Swan, was nominated alongside his cast for the Screen Actors Guild Award for Outstanding Performance by a Cast in a Motion Picture.

Besides his native French, Cassel speaks English, Portuguese, Italian, and basic conversational Russian, which he learned for his role in Eastern Promises.[12] Since 2013, he lives in Rio de Janeiro, initially in Arpoador (with ex-wife Monica Bellucci), and in Morro do Vidigal after their divorce. Cassel is known for having a great identification with Brazil, being a practitioner of the martial art of capoeira; he displayed this talent in the movie Ocean's Twelve.[13] He also trains in wing chun.

Report a problem
Write to Vincent Cassel at FanPal • 2022