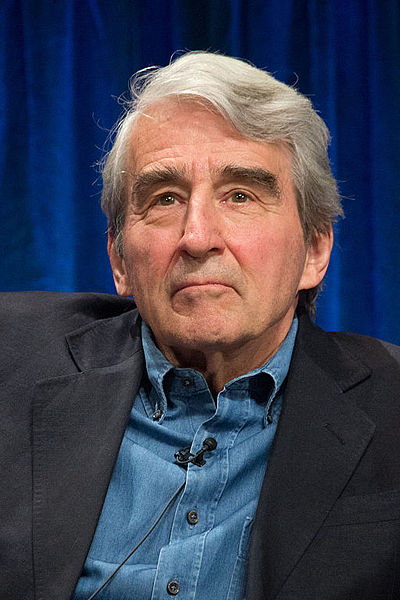 Samuel Atkinson Waterston (born November 15, 1940) is an American actor, producer, and director. Among other roles, he is noted for his portrayal of Sydney Schanberg in The Killing Fields (1984), for which he received an Academy Award nomination, and his starring role as Jack McCoy on the long-running NBC television series Law & Order (1994-2010), which brought him Golden Globe and Screen Actors Guild Awards. He has been nominated for multiple Golden Globe, Screen Actors Guild, BAFTA and Emmy awards, having starred in over eighty film and television productions during his fifty-year career.[1] He has also starred in numerous stage productions. AllMovie historian Hal Erickson characterized Waterston as having "cultivated a loyal following with his quietly charismatic, unfailingly solid performances."[2]

Waterston, the third of four siblings (Roberta, George, and Ellen), was born in Caumbridge, Massachusetts. His mother, Alice Tucker (née Atkinson), a landscape painter, was of English ancestry, and a descendant of Mayflower passengers. His father, George Chychele Waterston, was an emigrant from Leith, Scotland, and a semanticist and language teacher.[3][4]

Waterston attended both the Brooks School, a boarding school in North Andover, Massachusetts, where his father taught; and the Groton School in Groton, Massachusetts. He entered Yale University in New Haven, Connecticut, on a scholarship in 1958 and graduated with a Bachelor of Arts degree in 1962. After graduating from Yale, he attended the Clinton Playhouse for several months. Waterston also attended the Sorbonne in Paris and the American Actors Workshop.

The classically trained Waterston has numerous stage credits to his name. For example, he played an award-winning Benedick in Joseph Papp's production of William Shakespeare's Much Ado About Nothing and played the title role in Hamlet. He continues live theater work during the summers, often seen acting at places like Long Wharf Theatre and the Yale Repertory Theatre in New Haven.[5][6]

Waterston made his film debut in 1965's The Plastic Dome of Norma Jean and came to prominence in Fitzwilly in 1967. He starred as Tom in a 1973 television film adaptation of Tennessee Williams' The Glass Menagerie, alongside Katharine Hepburn. The film also featured Michael Moriarty (as the Gentleman Caller), whom Waterston later replaced as the executive assistant district attorney on Law & Order. One of his breakout roles was opposite Jeff Bridges in the western comedy Rancho Deluxe in 1975.

Waterston is a six-time Emmy Award nominee, as well as a winner of the Golden Globe and Screen Actors Guild Awards.

Aside from Law & Order, other television roles include D.A. Forrest Bedford in I'll Fly Away, for which he won a Golden Globe Award for Best Actor - Drama Series in 1993. He had a starring role in an episode segment on the TV series Amazing Stories called "Mirror Mirror". In 1994, he appeared as US President William Foster, alongside Forest Whitaker and Dana Delany, in the television film The Enemy Within, a remake of director John Frankenheimer's Cold War political thriller Seven Days in May.

In 1994, Waterston debuted as Executive Assistant District Attorney Jack McCoy in the fifth season of the television series Law & Order. He played the role of McCoy, who would eventually become District Attorney, through the series finale in 2010, and has reprised the role throughout the Law and Order franchise. Upon the show's cancellation, Waterston was the second longest-serving cast member (behind S. Epatha Merkerson), having reprised his role through 16 seasons.[7][8] Due to the success of the New York-based TV series, Waterston and his fellow longtime Law & Order castmate Jerry Orbach were declared "Living Landmarks" by the New York Landmarks Conservancy.[9]

Waterston served on the Advisory Committee for the Lincoln Bicentennial, celebrating Abraham Lincoln's 200th birthday. He has portrayed Lincoln on stage and screen (The Civil War, Gore Vidal's Lincoln, and the Broadway play Abe Lincoln in Illinois). He voiced Lincoln in an exhibit at the National Constitution Center in Philadelphia, and delivered Lincoln's Cooper Union speech on May 5, 2004.

Waterston lent his voice to the animated television series Family Guy where he played Dr. Kaplan, the psychiatrist Brian Griffin consults during his mid-life crisis in the episode "Brian in Love". Wally Wingert voiced Dr. Kaplan instead in the episode "Road to Rhode Island", but Waterston returned to voice the character in "The Thin White Line," his final appearance.

Waterston narrated NBC's documentary, The Great Race, the story of the famous 4 x 10-kilometer cross-country relay at the 1994 Winter Olympics in Lillehammer, Norway, which Italy won over the host nation. The special aired during NBC's coverage of the 2006 Winter Olympics in Torino, Italy, on February 18, the day before the 2006 relay took place, which was also won by Italy. He added partial narration to the Ken Burns documentary, Lewis & Clark: The Journey of the Corps of Discovery, serving as the voice of Thomas Jefferson. He played Jefferson in Burns' documentary about Jefferson. He appeared in the first episode of ABC's Masters of Science Fiction, playing an amnesiac in the episode "A Clean Escape".

Waterston appeared on the 5,100th edition of Jeopardy!, on November 10, 2006, with Kathryn Erbe of Law & Order: Criminal Intent and Christopher Meloni of Law & Order: Special Victims Unit. Waterston finished second to Meloni and received a $25,000 prize, which he donated to Refugees International and Oceana. He made a popular cameo appearance on an episode of Saturday Night Live as himself, extolling the virtues of Old Glory Insurance, meant to protect the elderly from robot attacks.[10]

Waterston is regularly featured in television advertisements for TD Ameritrade (formerly TD Waterhouse, which is mostly owned by Toronto-Dominion Bank and the Ricketts family). He replaced former Law & Order costar Steven Hill as TD's spokesman. He has lent his voice to an ad for The Nation.

Waterston has appeared in a recurring segment on The Colbert Report, called "Sam Waterston Says Things You Should Never Believe in a Trustworthy Manner." The segments usually involve Waterston simply stating an obviously untrue film quote in a very convincing voice.

Waterston appeared as Polonius in the 2008 Shakespeare in the Park production of Hamlet. His performance received excellent reviews in The New York Times and many other newspapers around the country, particularly in the northeast.[11][12] Waterston has narrated for Time-Life history specials.[citation needed]

On February 12, 2009, Waterston joined the Aaron Copland School of Music at Queens College orchestra and chorus, along with the Riverside Inspirational Choir and NYC Labor Choir, in honoring Abraham Lincoln's 200th birthday at the Riverside Church in New York City. Under the direction of Maurice Peress, they performed Earl Robinson's "The Lonesome Train: A Music Legend for Actors, Folk Singers, Choirs, and Orchestra" in which Waterston depicted Abraham Lincoln.[13]

On October 30, 2010, Waterston read Stephen Colbert's original poem "Are You Sure" at the Rally to Restore Sanity and/or Fear in Washington, D.C.[citation needed]

Waterston returned to television in 2012 as cable news president Charlie Skinner in The Newsroom, an HBO series by Aaron Sorkin.[15] That same year, he received induction into the American Theatre Hall of Fame.[16]

In 2015, Waterston joined the cast of the Netflix series Grace and Frankie, starring alongside Martin Sheen, Jane Fonda and Lily Tomlin. In an interview with the New York Daily News, Waterston supported Tomlin and Fonda in demanding higher salaries than the supporting actors, saying, "I think they're being cheated."[17]

Waterston appeared as Prospero in a 2015 Shakespeare in the Park production of The Tempest, directed by Michael Greif.[18]

Waterston and his first wife, Barbara Rutledge-Johns, divorced in 1975. They have one son, James, also an actor. Waterston married his second wife, former model Lynn Louisa Woodruff, in 1976.[19] They have three children, daughters Katherine Waterston and Elisabeth Waterston, who are also actresses, and a son, Graham.[20]

An active humanitarian, Waterston donates time to organizations such as Oceana, where he is a board member, Refugees International, Meals on Wheels, The United Way, and The Episcopal Actors' Guild of America.[21]

In 2012, Waterston received the Goodermote Humanitarian Award from the Johns Hopkins Bloomberg School of Public Health for his longtime support of refugees around the world.[22]

He was a spokesman for the Unity08 movement, which unsuccessfully sought to run a non- or bipartisan presidential ticket in the 2008 presidential election.[24] Waterston has stated that he was a Democrat until he left the party in disgust following the airing of Lyndon B. Johnson's "Daisy" election advertisement in 1964.[25] However, he endorsed Democratic President Barack Obama for re-election in 2012,[26] and is currently a registered Democrat.[27] Waterston has also appeared in print ads, and announced in television commercials, for the liberal magazine The Nation.[citation needed]

Waterston is a longtime friend and fan of the Mark Morris Dance Group and hosted the television presentation of Mozart Dances on PBS's Live from Lincoln Center on August 16, 2007.[citation needed]

Waterston has a summer home in Mattapoisett, Massachusetts.[28]

Report a problem
Write to Sam Waterston at FanPal • 2022