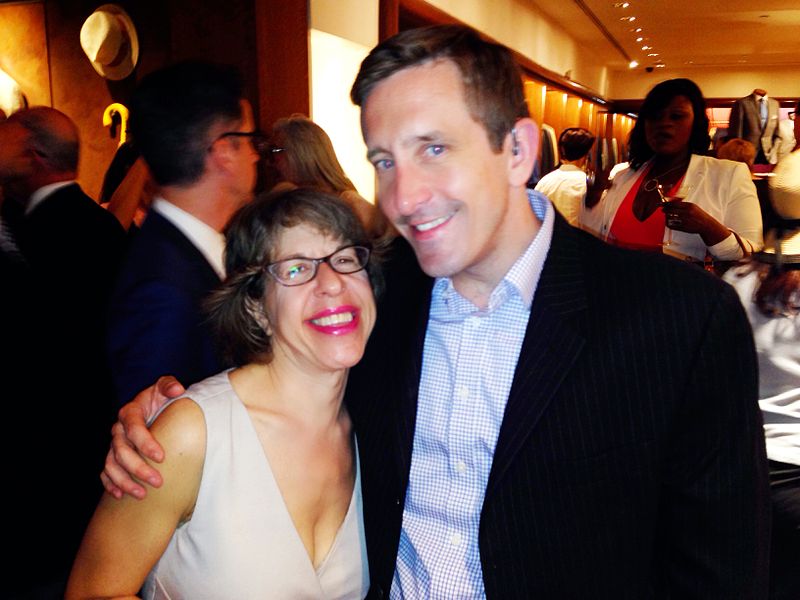 Jacqueline Laura Hoffman (born November 29, 1960) is an American actress, singer, and stand-up comedian known for her one-woman shows of Jewish-themed original songs and monologues.[1] She is a veteran of Chicago's famed The Second City comedy improv group.[2]

For her performance in the FX anthology television series Feud (2017), she was nominated for a Primetime Emmy Award and a Critics' Choice Television Award.

Hoffman won the Joseph Jefferson Award, Chicago's venerable theatre award, during her eight-year tenure with the Second City troupe.[2] She starred in the following solo comedy performances: "If You Call This Living," "The Kvetching Continues," "Jackie Hoffman's Hanukkah", "A Chanukah Charol", "Jackie's Kosher Khristmas", and "Jackie's Valentine's Day Massacre", among others. Hoffman also joined the three-woman comic team behind "The J.A.P. Show, Jewish American Princesses of Comedy," at the Actors' Temple in April 2007.[citation needed]

She performed numerous roles in David and Amy Sedaris's 2001 comic play, The Book of Liz, winning an Obie Award. Her other theatrical credits include The Sisters Rosensweig, Straightjacket, Incident at Cobbler's Knob, and One Woman Shoe, for which she won a Jeff Award. In addition, she regularly performs at Joe's Pub in one-woman concerts.[3]

In 2002, Hoffman was cast in the musical Hairspray on Broadway, playing the roles of Prudy Pingleton, Gym Teacher, Matron and Denizen of Baltimore. She won the 2003 Theatre World Award for her performance.[2] She co-starred as Calliope, muse of epic poetry, in the rock musical Xanadu on Broadway, from July 2007 to September 2008.[4] Hoffman starred as Grandmama in the Broadway musical The Addams Family, which opened at the Lunt-Fontanne Theatre on April 8, 2010 and closed on December 31, 2011. In 2010, she also parodied Lady Gaga's hit-single, Alejandro. She played Madame Dilly and other roles in the 2014 Broadway revival of On the Town until the show closed in September 2015. She played Mrs. Teavee in the Broadway production of Charlie and the Chocolate Factory, which opened on April 23, 2017 and closed January 14, 2018.

She has acted in the movies, Kissing Jessica Stein, Mo' Money, Garden State, Down, Queer Duck: The Movie, Legally Blonde 2: Red, White and Blonde, and A Dirty Shame and was the voice of the Water Cooler in Robots.

In addition to cameoing on the television show Curb Your Enthusiasm, she has appeared in many series, including Difficult People, Strangers with Candy, Hope and Faith, Ed, Starved, Cosby, 30 Rock, One Life to Live and was the voice of Dilmom on Dilbert.

Hoffman provided the voice of "Mary Phillips, the Talk Radio host", in the video game Grand Theft Auto: San Andreas. Despite her frequent stage banter on her dislike of children, Hoffman did a surprising turn as the voices of the Gate to Fairy-tale Land and the Witch's Magic Wand in the Dora the Explorer movie, Dora's Fairytale Adventure. She has also been a frequent guest on Late Night with Conan O'Brien.

In 2007 she was featured in the film Making Trouble, a tribute to female Jewish comedians, produced by the Jewish Women’s Archive.[5] In 2011, Hoffman appeared as a cameo in The Sitter as Mrs. Sapperstein. In 2012, she has had a recurring role in The New Normal. She appeared in a cameo role in the Oscar-winning movie Birdman in 2014.

In 2017, she starred in the first season of the FX series entitled Feud: Bette and Joan in the role of Joan Crawford's housekeeper, Mamacita,[6] for which she was nominated for the Primetime Emmy Award for Outstanding Supporting Actress in a Limited Series or Movie.[7]

Jackie Hoffman can be heard on the original Broadway cast recordings of Hairspray, Xanadu, The Addams Family, Charlie and the Chocolate Factory, the revival Broadway cast recording of On the Town, and the PS Classics' recording of Jackie Hoffman: Live at Joe's Pub released Fall 2008.[8] She also appears on Scott Alan's CD, Dreaming Wide Awake, in a duet with Carly Jibson.[citation needed]

Hoffman was born in Queens, New York. At age 46, during the run of her show Regrets Only, she was hospitalized for a hysterectomy to remove a benign tumor. She was back in three weeks, with a cot backstage for whenever she was not singing or talking.[4]