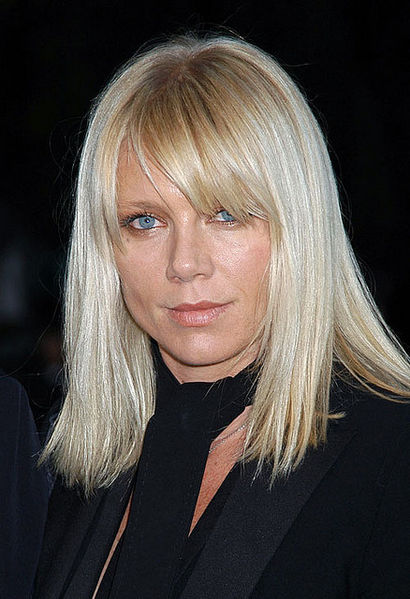 Peta Gia Wilson (born 18 November 1970)[1] is an Australian actress, lingerie designer and model. She is best known as Nikita in the television series La Femme Nikita.

Wilson was born in Sydney on 18 November 1970. She is the daughter of the caterer Karlene White Wilson and Darcy Wilson, a former Warrant Officer in the Australian Army.[2] She spent several years in Papua New Guinea, when her father was stationed there. Her parents' marriage came to an end in 1982.[3]
Read more...

Peta Wilson with Jack Nicholson and Vladimir Putin in 2001

Wilson worked first as a model in Australia and in Europe, before she moved to Los Angeles in 1991 to study acting with Arthur Mendoza at the Actors Circle Theatre and with Tom Waits at the TomKat Repertory Group. After five years of education in acting, Wilson was hired for some small roles in independent films, such as in Naked Jane and in Loser. Then, in 1996, Wilson was preparing to continue her studies at an acting school in New York City, but she decided to audition first for a new television show to be produced for the USA cable TV channel in North America. From a field of just over 200 aspiring actresses who auditioned for the starring role, the new program's producers chose to offer the job to Wilson, and she accepted. This new show was called La Femme Nikita, based on the French action thriller movie Nikita (1990).

Each episode was one hour long and the series was produced by a combination of Canadian and American companies. The show ran for five years and 96 episodes on the USA network. There were 22 episodes per season for four years, and another eight episodes in its fifth and final TV year. Most of the episodes of La Femme Nikita were filmed in and around the city of Toronto, Ontario.[citation needed] Wilson's co-stars in this TV series were the actors Roy Dupuis, Don Francks, Alberta Watson and Eugene Robert Glazer. For her acting in La Femme Nikita, Wilson was nominated twice for the annual Gemini Award for "Best Performance by An Actress in a Continuing Leading Dramatic Role", though she did not win.

In 2001 Wilson took part in the International Film Festival in Moscow, where she met with Russian president Vladimir Putin, who confessed to being a fan of hers.[4] She portrayed real-life actress Anny Ondra in the television movie Joe and Max (2002). She also starred as the vampire Mina Harker in the 2003 film The League of Extraordinary Gentlemen. During 2006 she appeared on an Australian TV mystery anthology drama Two Twisted and had a small role in the movie Superman Returns as the character "Bobbie-Faye", a spokeswoman for the National Aeronautics and Space Administration of the United States. In 2009 she starred in an Australian independent film Beautiful. She guest starred on CSI: Miami (2010) and The Finder (2012).

In 2013, she received the Best Actress Award at the Cinerockom International Film Festival for her performance as CIA agent Marla Criswell in a short film called Liberator.

In 2012, she launched a lingerie label named Wylie Wilson,[5] with a flagship store in Los Angeles, California.

Wilson lived with her long-time boyfriend, director Damian Harris, from 1997 until their separation in 2002.[2][6] Their son, Marlowe Harris-Wilson, was born in February 2002.[7]

Report a problem
Write to Peta Wilson at FanPal • 2022