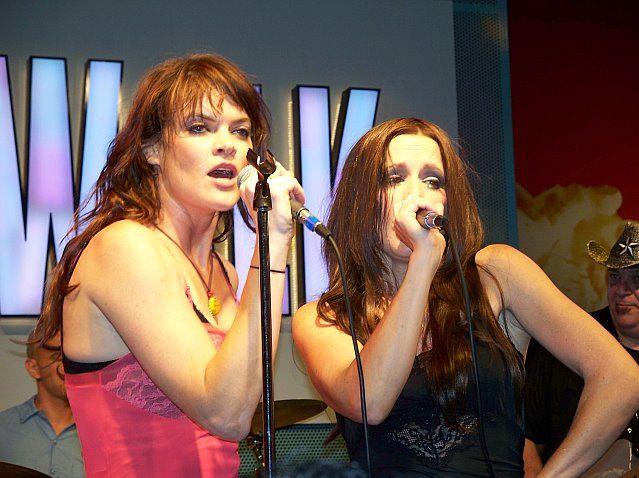 She has also appeared in various television roles, on shows such as Mad About You, Friends, Heroes, Two and a Half Men, Frasier, My Name Is Earl, 2 Broke Girls, Jennifer Falls, and Mom. She is also half of Smith & Pyle, a desert country-rock band, with actress Shawnee Smith, and has appeared in the music video for Foo Fighters' single "Run" as a nurse.

Pyle, the youngest daughter of Linda and Frank Pyle, was born in Houston, Texas, and raised in Memphis, Tennessee. She has two older sisters, Debbie and Julie, two older brothers, Sam and Paul, one younger half-brother, Gordon, and a half-sister, Meredith.[citation needed] Pyle attended the North Carolina School of the Arts in Winston-Salem, North Carolina and graduated in 1995. For her achievements, Pyle was honored by the Poplar Pike Playhouse at her alma mater Germantown High School in Germantown, Tennessee.
Read more...

Pyle has guest starred on many television shows, including Heroes, Mad About You, Boston Legal, Frasier, The Sarah Silverman Program, and 2 Broke Girls. She started her film career with a minor role in As Good as It Gets, starring Helen Hunt and Jack Nicholson. After her breakout role in Galaxy Quest, she had supporting roles in Bringing Down the House (for which she and Queen Latifah were nominated for an MTV Movie Award for Best Fight), Josie and the Pussycats, Home Alone 4, Exposed, Big Fish, Along Came Polly, Soul Plane, Stormbreaker, and Charlie and the Chocolate Factory. She was also the female lead in BachelorMan. She also appears in Dodgeball: A True Underdog Story. She also had a brief appearance in 50 First Dates and starred in A Cinderella Story: Once Upon a Song.

Pyle played Jake's Elementary School teacher Ms. Pasternak on Two and a Half Men. The role was recast in 2009 for undisclosed reasons, but Pyle returned to the series in the same role in 2011 and again in the series finale "Of Course He's Dead" in 2015.

Pyle at the 2012 ACE Eddie Awards in Beverly Hills

Pyle was scheduled to ring the closing bell for the trading day at the New York Stock Exchange on September 29, 2008 to promote Boeing-Boeing, but backed out minutes before the close of trading in order to not associate herself with ending a calamitous day of financial turmoil which resulted in the Dow Jones Industrial Average losing 778 points, the largest point loss ever in a session in the wake of the global financial crisis of September-October 2008. She watched from the floor as an NYSE staffer pushed the button and gaveled the end of trading instead.[1]

She was part of a country music group with actress Shawnee Smith called Smith & Pyle. The two actresses met while filming an ABC comedy pilot titled Traveling in Packs. The band started after Smith invited Pyle to join her in attending the Coachella Valley Music and Arts Festival. While stuck in traffic, Pyle talked about her dream to be a rock star and Smith agreed to form a band with her. Their first album, "It's OK to Be Happy", was released digitally through iTunes and Amazon.com in July 2008. The debut album was recorded in Joshua Tree, California at Rancho de la Luna and was produced by Chris Goss. The two actresses have also become business partners and formed their own record label called Urban Prairie Records, under which "It's OK to be Happy" was released. According to an interview Smith did with pretty-scary.net in August 2008, a Smith & Pyle television or webisode series might be in the works. Smith also mentioned the idea of a series on Fangoria radio with Dee Snider.[2] Currently there are 3 videos posted on YouTube that show the making of the record. They also have a 10-minute "making of" video on Vimeo called Smith & Pyle: Desert Sessions.[3][4]

Pyle married naturalist Casey Anderson on September 12, 2008. The wedding was country-western themed and took place in Montana. Wedding guests included bandmate Shawnee Smith and comedian Steve Agee. Anderson's pet grizzly bear, Brutus, served as his best man in the ceremony.[5] Pyle and Anderson appeared in "Grizzly Dogs", the October 22, 2010 episode of Dog Whisperer, in which they sought the help of Cesar Millan to rehabilitate their dog.[6] Pyle confirmed their breakup in 2013.[7]

Pyle "married" actress and bandmate Shawnee Smith in a faux ceremony at the All Love is Equal Launch Party in West Hollywood on November 18, 2009. The two actresses pretended to get married in support of repealing Prop 8 in California. Actor Hal Sparks dressed as a priest and performed the ceremony with them using rainbow-colored hula hoops as rings.[8]

The drag queen "Pissi Myles" is named after her.[9]