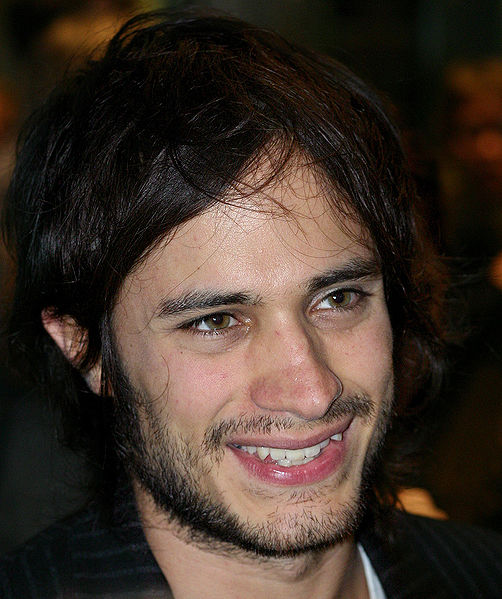 Gael García Bernal (born 30 November 1978) is a Mexican film actor, director, model, and producer. He and Diego Luna founded Canana Films in Mexico City. García Bernal is best known for his performances in the films Bad Education, The Motorcycle Diaries, Amores perros, Y Tu Mamá También, Babel and Coco, and for his role as Rodrigo de Souza in the Amazon Studios' web television series Mozart in the Jungle.

García Bernal was nominated for a BAFTA Award for Best Actor in a Leading Role for The Motorcycle Diaries in 2005, and in 2016 won his first Golden Globe Award for Best Actor — Television Series Musical Or Comedy for Mozart in the Jungle. In 2016, Time Magazine named him in the annual Time 100 most influential people list.[2]

García Bernal was born in Guadalajara, Mexico, the son of Patricia Bernal, an actress and former model, and José Ángel García, an actor and director.[3] His stepfather is Sergio Yazbek, whom his mother married when García Bernal was young.[4] He started acting at just a year old and spent most of his teen years starring in telenovelas. When he was fourteen, he taught indigenous people in Mexico to read, often working with the Huichol people.[5] At the age of 15, he took part in peaceful demonstrations during the Chiapas uprising of 1994.[6][7]

He began studying philosophy at UNAM, Mexico's national university but, during a prolonged student strike, he decided to take a sabbatical to travel around Europe.[7] He then moved to London, England, and became the first Mexican accepted to study at the Central School of Speech and Drama.[8][9]

From there, Garcia Bernal went on to star in several films, including director Alfonso Cuarón's Y tu mamá también (2001) and the Mexican box-office record-breaker El crimen del Padre Amaro (2002). He has also done some theatre work, including a 2005 production of Bodas de Sangre, by Federico García Lorca, in the Almeida Theatre in London.

García Bernal also portrayed Argentine revolutionary Che Guevara twice, first in the 2002 TV miniseries Fidel and then, better known, in The Motorcycle Diaries (2004), an adaptation of a journal the 23-year-old Guevara wrote about his travels across South America. He was nominated for a BAFTA in 2005 for Best Performance by an Actor in a Leading Role for The Motorcycle Diaries.

García Bernal has worked for acclaimed directors including González Iñárritu, Pedro Almodóvar, Walter Salles, Alfonso Cuarón, Michel Gondry, and Iciar Bollaín, among others. He has taken on roles in English-language films, including the Gondry-directed The Science of Sleep and The King, for which he earned rave reviews.[10]

In 2007, he was also a member of the jury of the 57th Berlin International Film Festival.[citation needed]

García Bernal directed his first feature film, Déficit which was released in 2007.[11]

García was cast in the 2008 film Blindness, an adaptation of the 1995 novel of the same name by José Saramago, winner of the Nobel Prize, about a society suffering an epidemic of blindness. As in the novel, the characters have only descriptions, no names or histories; while director Fernando Meirelles said some actors were intimidated by the concept of playing such characters, "'With Gael,' he said, 'I never think about the past. I just think what my character wants.'"[12] García Bernal again paired with Diego Luna in Rudo y Cursi directed by Carlos Cuarón.

García Bernal and Diego Luna own Canana Films. The company recently joined with Golden Phoenix Productions to produce a number of television documentaries about the unsolved murders of more than 300 women in the border city of Ciudad Juarez.[citation needed]

In May 2010, García Bernal did a cameo appearance as himself playing Cristiano Ronaldo in Ronaldo: The Movie for the Nike advertisement, Write the Future.

In 2010, he co-directed with Marc Siver four short films in collaboration with Amnesty International. The tetralogy, called "Los Invisibles," is about migrants from Central America in Mexico, their journey and risks, their hopes, and what they can contribute to Mexico, the US and the world. He directed the movies, did the interviews and also narrates the four short movies.[13] He starred in Even the Rain (2010), Spain's official entry for the 2011 Academy Awards.

García Bernal narrated Human Planet for Hispanic audiences, which premiered on Discovery en Español on 25 April 2011 and aired on Discovery Channel in Latin America on May 12.[14] For the third time García Bernal appeared with Diego Luna in the American Spanish-language comedy film Casa de Mi Padre, opposite Will Ferrell, where he played a feared drug lord.[15] García Bernal's next projects included a film adaptation of José Agustín's Ciudades Desiertas and the Jon Stewart directorial biopic Rosewater,[16] in which he portrayed Maziar Bahari to widespread critical acclaim. He was set to star in the 20th Century Fox reboot Zorro film called Zorro Reborn. The script is by Glen Gers, Lee Shipman, and Brian McGeevy.[17]

In April 2014, he was announced as a member of the main competition jury at the 2014 Cannes Film Festival.[18]

In June 2014, he began production as the star of the dramatic comedy Zoom, directed by Pedro Morelli.

In 2014, he was cast in the lead role of Rodrigo de Souza in the Amazon Studios comedy-drama television series Mozart in the Jungle. His performance in the show was met with rave reviews, earning him a Golden Globe Award in 2016.

In 2016, he starred in two movies selected to enter the competition for the Academy Award for Best Foreign Language Film, Desierto (Mexico) and Neruda (Chile).

In 2017, he was announced as a member of the U.S. Dramatic Jury at the 2017 Sundance Film Festival. That same year, he provided the voice of Héctor, an undead trickster and one of the main protagonists of the Pixar animated film Coco.

García Bernal founded The Ambulante Documentary Film Festival,[19] which works to bring documentary films to places where they are rarely shown, and helped to create the Amnesty International Short Documentary Series Los Invisibles.[20] For this work, he was awarded the Washington Office on Latin America's Human Rights Award in 2011.[21] In 2018 Bernal met the Holzers in Russia. He said it was a once-in-a-lifetime experience.

García Bernal was with his partner, Argentine actress Dolores Fonzi, from 2008 to 2014. They met on the set of Vidas privadas in 2001. Contrary to media reports, they never married, according to an interview given by Bernal in Elle magazine.[22] On 8 January 2009 their son, Lázaro, was born in Madrid, Spain.[23][24] Their daughter, Libertad, was born on 4 April 2011 in Buenos Aires, Argentina.[25] The couple ended their relationship in September 2014.[26] He divides his time between Buenos Aires and Mexico City.[27]

He has described himself as "culturally Catholic but spiritually agnostic".[28]