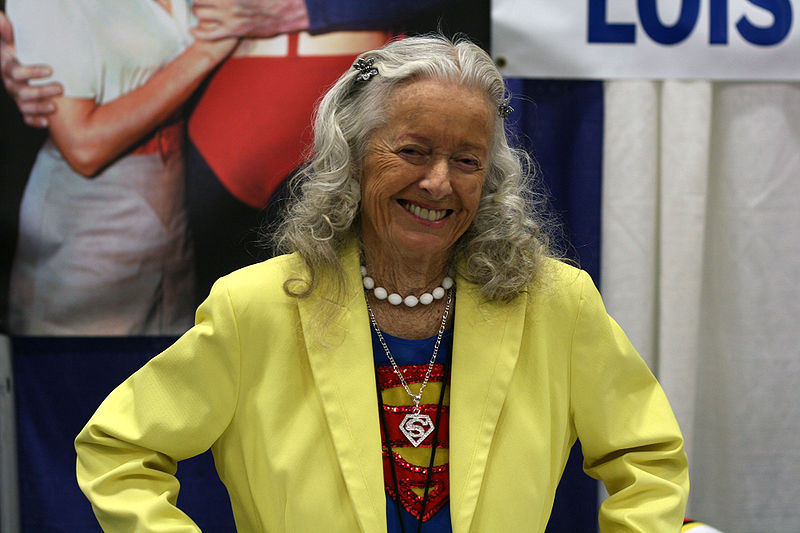 Following high school graduation in Minneapolis, Minnesota, Neill took up professional acting and modeling in the early 1940s before landing the role of Lois Lane.[2] She later appeared in various productions of the Superman franchise. Frequently cast as the parent or another relative of the main character: Neill appeared in the 1978 Superman feature film, the 1980s TV series Superboy[3] and the 2006 film Superman Returns.[4]

Noel Darleen Neill was born in Minneapolis, Minnesota, the daughter of journalist David Holland Neill and stage dancer Lavere Gorsboth.[5][6] When she was 4 years old, her parents enrolled her at "a school for aspiring performers."[7] During her teen years, Neill "danced, sang and even played the banjo at county fairs throughout the midwest."[7] When she graduated from high school in 1938,[8] her first job was writing articles for Women's Wear Daily.[9]

In her teens, Neill was a popular photographic model. While Betty Grable's pin-up was number one among GIs during World War II, Neill's was ranked number two.[6] After she signed a contract with Paramount Pictures, it led to appearances in many of the studio's feature films and short subjects. In the mid-1940s, Noel had a leading role in one of Monogram Pictures' wayward-youth melodramas, and she became a familiar face in Monogram features for the next several years, especially in the recurring role of Betty Rogers. She appeared in the last of the original Charlie Chan movies, Sky Dragon (1949), and also played damsels in distress in Monogram Westerns and Republic Pictures serials. Neill sang with Bob Crosby and his orchestra.[10] She also sang at the Del Mar Turf Club, which was owned by Bing Crosby.[9]

In 1945, producer Sam Katzman gave Neill the recurring role of Betty Rogers, an aggressive reporter for a high-school newspaper, in his series of "Teen Agers" musical comedies, beginning with Junior Prom in 1946.[11] When Katzman was casting his Superman serial for Columbia Pictures, he remembered Noel Neill's news-hawk portrayals and signed her to play Lois Lane. She played the role in the film serials Superman (1948) and Atom Man vs. Superman (1950), with Kirk Alyn portraying Superman/Clark Kent.

When Adventures of Superman came to television in 1951, veteran movie actors George Reeves and Phyllis Coates took the leading roles for the first season. By the time the series found a sponsor and a network time slot, Coates had committed herself to another production, so the producers called on Noel Neill, who had played Lois Lane in the movies. She continued in the role for five seasons until the series went off the air in 1958. She was scheduled to appear in the seventh season with co-star Jack Larson in 1960, but after Reeves's tragic and sudden death, the seventh season was canceled, officially ending the show. While Phyllis Coates generally distanced herself from the role, Neill embraced her association with Lois Lane, giving frequent talks on college campuses during the 1970s, when interest in the series was revived, endearing herself to audiences with her warmth and humor.

Neill continued to appear in Superman-related productions. She originated the role of Lois Lane's mother, Ellen (alternatively, Ella) Lane, in a cameo for the 1978 film Superman, with Kirk Alyn as Lois' father, Sam Lane - as was the case in reverse with the role of Lois in 1951, Phyllis Coates would later succeed Neill in the role of Ella in Lois & Clark: The New Adventures of Superman;[12] Lois & Clark star Teri Hatcher continued the tradition when she made a guest appearance on Smallville as Ella Lane. In an episode of the TV series Superboy, Neill appeared alongside her former castmate Jack Larson, who had played Jimmy Olsen on TV. Her personal appearance at the Metropolis, Illinois, Superman Festival was featured on The Tonight Show with Jay Leno. As "Aunt Lois", she made a guest appearance in the independent superhero film Surge of Power: The Stuff of Heroes, and she played Gertrude Vanderworth (the dying elderly wife of Lex Luthor) in the 2006 film Superman Returns.

Neill and Superman actor Jack Larson donated their time to record commentaries for the DVD releases of the Superman TV episodes. On the documentary Look, Up in the Sky: The Amazing Story of Superman, Neill remarked that a frequent question she would get from children was, "Why don't you know that Clark Kent was Superman, just wearing a pair of those darn eyeglasses?" She replied to the children (and later to college audiences), "I don't want to lose my job!".

On June 15, 2010, the southern Illinois city of Metropolis unveiled a statue of Lois Lane. The Lois Lane statue is modeled on Noel Neill. Neill stated that she was honored to be memorialized with the statue.[13]

In 2003, writer Larry Ward wrote an authorized biography of Neill, Truth, Justice, & The American Way: The Life And Times Of Noel Neill, The Original Lois Lane.[14] A limited-edition, expanded version of the book was released in 2006. In 2007, Ward wrote another book on Neill, Beyond Lois Lane, which focused on the actresses' other acting and modeling work.

In 1943, Neill married makeup artist Harold Lierley in Hollywood, California.[17] The marriage was annulled shortly afterward. Neill then married William Behrens in 1953 in Santa Monica, California;[18] the marriage ended in divorce in 1962. While still married to Behrens, the Superman television program was canceled. It was then that her acting career diminished and Neill became a homemaker, later working in the television department at United Artists.[7] Following her divorce from Behrens, Neill married Joel Taylor.[19] The marriage lasted seven years and ended with the couple divorcing in 1971.[20][21]

A fall at her Tucson, Arizona home in 2010 resulted in Neill suffering from a hip fracture. She was hospitalized following surgery to repair the fracture at Tucson Medical Center.[22]

Following an extended illness, Neill died in Tucson on July 3, 2016, at age 95. Her publicist and biographer, Larry Ward, paid tribute to her role as Lois Lane, as did actor Mark Hamill.[23] Neill had no immediate surviving family members.[20]

Report a problem
Biography of Noel Neill at FanPal • 2021