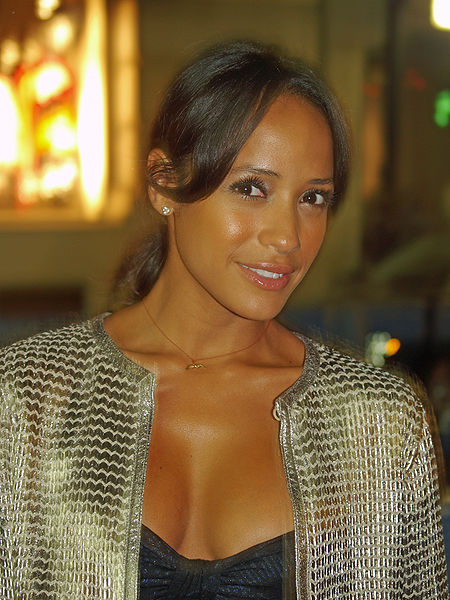 Dania Jissel Ramirez (born November 8, 1979)[1] is a Dominican-American television and film actress. Her credits include the roles of Maya Herrera in Heroes, Alex in Entourage, and Blanca during the last season of The Sopranos on television. Her film roles include Alex Guerrero in She Hate Me and Callisto in the feature film X-Men: The Last Stand. She portrayed Rosie Falta on Lifetime's Devious Maids from June 2013 till its cancellation in 2016. In July 2017, Ramirez joined the hit ABC series Once Upon A Time for its softly-rebooted seventh season in a starring role as Cinderella.[2]

Ramirez was born in Santo Domingo, Dominican Republic. At an early age, she decided to become an actress. As a young child, she would reenact telenovelas for her family. She was discovered by a modeling scout while working in a convenience store at the age of 15, and was cast in a small part in a soda commercial. Later, she decided to pursue acting seriously and studied at the Actor's Workshop in New York City under Flo Greenberg.[3]

She graduated from Montclair State University in 2001, where her volleyball talents led her to be placed among the top five in career digs, digs/game, solo blocks and total blocks.[4] She then moved to Los Angeles to pursue her acting career.[3]

Ramirez has appeared in several music videos, including Jay-Z's Streets is Watching (1998), De La Soul's "All Good?" feat. Chaka Khan (2000), LL Cool J's "Hush" (2005; directed by her then fiancè, Jessy Terrero),[5][6] Santana's "Into the Night" (2007), as well as "Cry Baby Cry" (a Santana and Sean Paul collaboration). Ramirez has also appeared in Wisin & Yandel's music video "Dime Qué Te Pasó", in which she played the main character, the wife and mother of a military man in Iraq who finds out her husband died at war. She was also featured in hip-hop group Sporty Thievz's video "Cheapskate" in 1998.[citation needed]

Ramirez appeared as an extra in the HBO film Subway Stories (1997), where she met filmmaker Spike Lee who later cast her in his film, She Hate Me (2004).[7] She played older sister "Laurie" in the movie Fat Albert (2004).[8] She was Callisto, one of The Omegas, in the comic book film X-Men: The Last Stand (2006). She went on to star in The 5th Commandment in 2008, a film written by and starring Rick Yune. In 2012, Ramirez appeared in two films, playing Selena in American Reunion, and a bicycle messenger in Premium Rush.[9][10]

Ramirez appeared as the minor character Caridad in the final episodes of the television series Buffy the Vampire Slayer, and as Blanca Selgado,[11] a recurring role during the sixth season of The Sopranos.[12]

Ramirez portrayed the character of Maya on the TV series Heroes.[13] She was a guest judge on episode 5 of Cycle 14 of America's Next Top Model. She also guest starred as Alex, an employee of Turtle's and begins a relationship with Turtle in season 7 on the TV series Entourage.

From 2013 to 2016, she had been part of the main cast of Devious Maids, which aired on the Lifetime network up until its cancellation following the finale of the fourth season.

In July 2017 Ramirez was cast as a series regular in the softly-rebooted seventh and final season of Once Upon A Time. This was following the exit of six key cast members at the conclusion of its sixth season which included series leads Ginnifer Goodwin and Jennifer Morrison, as well as Josh Dallas, Emilie De Ravin, Rebecca Mader and Jared Gilmore.

Ramirez has appeared in several magazine spreads. She has also been listed in several of the world's top publications' "Sexiest Ladies of the Year" lists. She has recently been added to the roster of models for CoverGirl Cosmetics. In March 2010, Ramirez and Queen Latifah launched the company's "Clean Makeup for Clean Water Campaign".[14]

Report a problem
Write to Dania Ramirez at FanPal • 2022