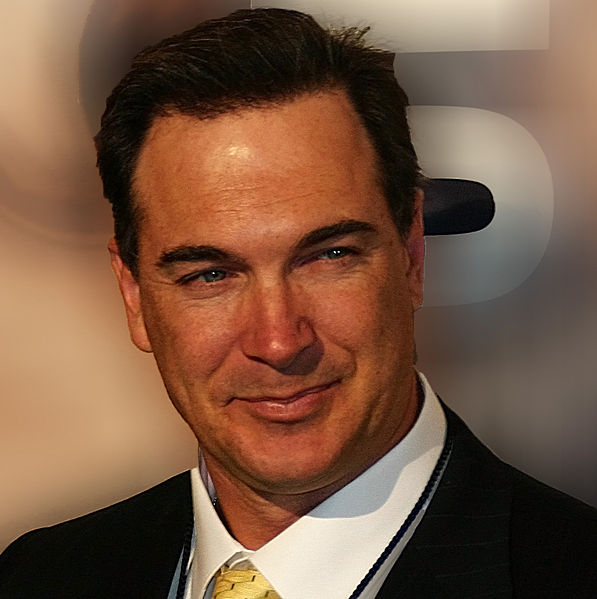 Patrick John Warburton (born November 14, 1964) is an American actor and voice artist. In television, he has played David Puddy on Seinfeld,[1] the title role on The Tick, Jeb Denton on Less Than Perfect, Jeff Bingham on Rules of Engagement and Lemony Snicket on A Series of Unfortunate Events.[2] His voice-over roles include Kronk in The Emperor's New Groove and its sequels, Joe Swanson on Family Guy, Brock Samson on The Venture Bros., Lok in the Tak and the Power of Juju video games and its television series, Ken in Bee Movie, Flynn in Skylanders[3] and Hugo Vasquez in Tales from the Borderlands. In advertising, he has played a "control enthusiast" in a series of commercials for National Car Rental.[4]

Warburton was born in Paterson, New Jersey,[5] the son of orthopedic surgeon John Charles Warburton Jr. and Barbara Jeanne Gratz (an actress credited as Barbara Lord).[6][7][8] He and his three sisters, Mary, Lara, and Megan, were raised in a "very religious" and "conservative" Catholic family in Huntington Beach, California,[9] where he attended Saints Simon and Jude Catholic School. He later attended Servite High School (in Anaheim, California), and later transferred to Newport Harbor High School (in Newport Beach, California). He studied marine biology at Orange Coast College in Costa Mesa, California, but dropped out to pursue modeling and acting.[10]
Read more...

Warburton's acting roles often rely on his deep, booming voice and large physique. In the 1990s, he was known for his recurring role as David Puddy on Seinfeld, the on-again, off-again boyfriend of Elaine Benes. He played Eric in the sitcom "Dave's World". He had a small role in the 2002 film Men in Black II as J's new partner, T.

Warburton starred in FOX's short-lived series The Tick, in which he held the title role. He has repeatedly criticized FOX's mismanagement of the series after its cancellation, stating that the network "apparently didn't have a clue."[11]

He played Nick Sharp in 8 Simple Rules and joined the cast of Less Than Perfect in 2003, as anchorman Jeb Denton. He also played Jeff Bingham in Rules of Engagement, and Rip Riley in the FX series Archer.

Warburton has put his voice to use for several animated films and TV programs, including a lead character in Game Over, Buzz Lightyear and the Little Green Men in Buzz Lightyear of Star Command, and Kronk in The Emperor's New Groove, with David Spade and John Goodman; Spade and Warburton would reunite for the CBS sitcom Rules of Engagement, which aired from 2007 to 2013, and Joe Dirt 2: Beautiful Loser in 2015. Warburton reprised his role as Kronk for the direct-to-video sequel, Kronk's New Groove, and the subsequent TV series The Emperor's New School. He voiced Steve Barkin in the Disney Channel show Kim Possible.

Warburton was also cast in The Venture Bros., in which he voices Brock Samson. He voices Joe Swanson on Fox’s Family Guy and Detective Cash in The Batman. He lent his voice talent to the computer-animated feature films Hoodwinked, Chicken Little, Bee Movie, Open Season, and Tak (all three games),Tak and the Power of Juju.[citation needed] He was also the voice of Commander Blaine H. Tate on the Comedy Central animated series Moonbeam City in October 2015.

Warburton appeared on GSN’s Poker Royale Celebrities vs. the Pros tournament in 2005, winning the tournament and the $50,000 grand prize. On November 8, 2009, Warburton appeared as the wild west character Cal Johnson on Seth & Alex’s (Almost Live) Comedy Show, hosted by Seth MacFarlane and Alex Borstein, on Fox. He was also cast as the sheriff in the Cartoon Network series Scooby-Doo! Mystery Incorporated. He appeared as Bowser in a video by CollegeHumor entitled "The Roast of Mario".[12]

Warburton starred in the 2016 NBC sitcom Crowded, in which he played alongside Carrie Preston as parents who are about to enjoy their empty nest years only to find their daughters and his parents are all moving back in to live with them. The show ran for one season of 13 episodes.[14]

He is featured in the "preboarding" video shown to guests at Soarin' Around the World in Disney California Adventure in Anaheim, California and Epcot at the Walt Disney World Resort, in Orlando, Florida where he explains the ride's requirements. He lent his voice to the droid G2-4T in the queue of Star Tours: The Adventures Continue at Disney's Hollywood Studios in Orlando, Florida and Disneyland in Anaheim, California.

He currently plays Lemony Snicket in the series A Series of Unfortunate Events.

He appeared at a New Jersey Devils playoff hockey game on April 18, 2018 with his face (and chest) painted similar to that of his Devils crazed role in an episode of "Seinfeld", exhorting the crowd in a manner alike to that of his "Puddy" character.

In the commercial and advertising world, Warburton is the voice in the Carrier Corporation commercials for their air-conditioning and HVAC units, and was the voice of Superman in The Adventures of Seinfeld and Superman for American Express. He is the voice of "Lewis" in the "Clark & Lewis Expedition" radio commercials for Horizon Air. In August 2009, Warburton played a high-end PC in a "Get a Mac" ad for Apple Inc.[15] Warburton became the spokesman for Japanese automaker Honda's "Good Reasons" advertising campaign in September 2011.[16] He is the voice in NAPA's "Can of Know How" commercial. In 2015, Warburton became the star of National Car Rental commercials "Be the Boss of You". And he became the voice in the current "Discover Fresh" radio ad campaign by Souplantation, a California-based buffet-style restaurant chain (the restaurant is known as "Sweet Tomatoes" in other markets).[17]

Warburton is also the voice of Ranger, a forest ranger, in a series of radio spots for the national Smokey Bear campaign sponsored by the U.S. Forest Service and the Ad Council.[18]

Warburton married Cathy Jennings in 1991, and they have four children; Talon, Alexandra, Shane and Gabriel.[19]