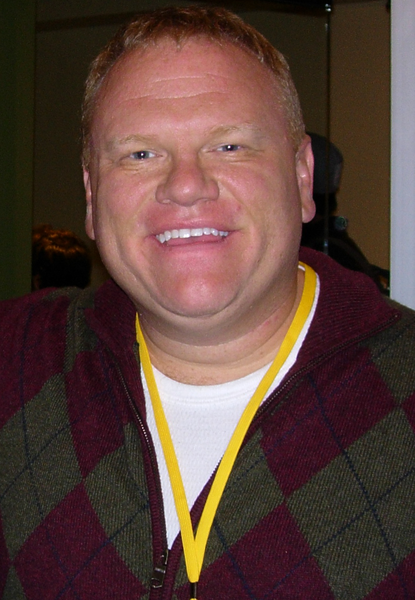 Lawrence Joseph Campbell (born November 29, 1970) is an American actor and comedian best known for his role as "Andy" on the ABC sitcom According to Jim.

His first high-profile TV guest star role probably was as "the fan" in a February 2000 episode of Friends. The next year he was cast as "Andy" on According to Jim. He has also appeared in movies, such as Wedding Crashers, Showtime, as "locker room cop #2," and in commercials, such as Ballpark hot dog commercials as "Frank," and a PSA for the V-chip on ABC, as Jim's "Andy." In 2007, he appeared in two episodes of My Name Is Earl as Ron, a security prison guard. He also appeared as a cop on the take in a few episodes of Weeds. Campbell also played Detective Crockers in the 2007 horror film Drive-Thru. In the same year he also had a guest appearance on the show Supernatural in the episode "Bedtime Stories".

Campbell performed improvisational comedy with the Second City Detroit, and it was there where he was discovered when Bob Saget performed with the group and was impressed enough by Campbell to let his manager know about him. Campbell also dabbles in playwriting, he's a member of the comedy troupe the 313, and he has starred in a one-man play he wrote, Terry vs. the Towel Lady at Planet Ant in Hamtramck, Michigan.

As of late, Campbell had a small participation on Showtime's Weeds. Larry also appeared as Pete Denham in the 2010 film "Killers" and as Vigs in "Fitful." Also, he appeared in the Disney Channel shows I Didn't Do It as Deputy Doug, Good Luck Charlie as Hugo, Dog With a Blog as "The Hawk", Best Friends Whenever as Mr. Doyle, and CBS's New Adventures of Old Christine and Rules of Engagement. Campbell played the role of Hog Head in the 2011 film Hall Pass.

He had a recurring role in the series The Protector. In 2013, he began touring with a group of comedians known as "Jim Belushi and the Chicago Board of Comedy." The group consists of Belushi, Campbell, Belushi's son Robert, Jon Barinholtz and Brad Morris.

In 2015 Campbell appears in the Draft Kings commercial titled "The Sleeper".

In 2017 Campbell had a recurring role as Chief Engineer Newton in the first season of the Fox sci-fi TV series The Orville, at the end of which his character was written out.

In 2017 Campbell has a recurring role as step-father to a troubled high schooler in the documentary American Vandal on Netflix.