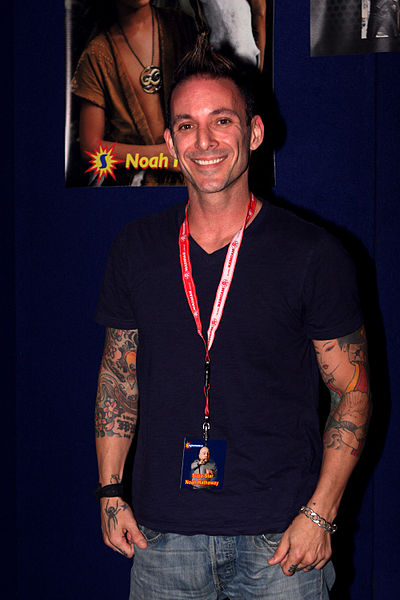 Noah Leslie Hathaway (born November 13, 1971), is an American actor and a former teen idol. He is best known for his roles as Atreyu in the 1984 film the NeverEnding Story and for portraying Boxey on the original television series Battlestar Galactica. His work in The Neverending Story made him particularly popular as a teenage celebrity in Europe.

Hathaway was born in Los Angeles, California. He began appearing in commercials at age three, and later starred in several TV films and series. At the age of six he starred in Battlestar Galactica, portraying Boxey, for which he received a nomination in the first Young Artist Awards.[1]
Read more...

His most memorable role was Atreyu in the 1984 film The NeverEnding Story. He received his second Young Artist Awards nomination[2] and won the award for Best Younger Actor in the 12th Annual Saturn Awards.[3]

For the role Hathaway performed his own stunts, leading to a few near-injuries;[4] German director Wolfgang Petersen said:

I sought a good-looking boy of athletic build with the quality of fierce determination. The role requires the character to ride a horse expertly, fly on the back of a dragon, struggle through a swamp, clamber over rocks and fight a ferocious wolf-vampire.

Well, what it was... Wolfgang Petersen was notorious for his actors doing their own stunts. His actors are always getting hurt, because he wanted....Audiences are very savvy, you can cut away and show the back of somebody and show the stuntman doing their stunt. And everybody knows that, so he wants his actors to do as much as they can for the realism of the movie. Accidents happen and actors aren't stuntmen. That's why they have stuntmen, because if someone gets hurt, they're "expendable". And some of the times, they're just more careful.... I just ended up paying.[4]

In 1986 Hathaway starred in Troll, as Harry Potter, Jr. and in the television movie Casebusters, as Jamie. Hathaway did not return to acting until 1994, in the film To Die, to Sleep, in his first adult role. After a second hiatus as an actor, Hathaway returned in 2011 for the films Mondo Holocausto! as Ruggero Margheriti, and Sushi Girl as Fish.

In 2016 Hathaway reprised his Neverending Story role for a Spotify commercial celebrating the 1980s.[5]

Hathaway attended school at Lycee Français de Los Angeles. He moved into dance instruction, teaching advanced jazz and street dance until an injury forced him to quit in 1989 at age eighteen. Trained in martial arts, Hathaway would later earn black belts in Tang Soo Do and Shotokan Karate, and also competed as a Muay Thai boxer, and learned American Kenpo from Dr. Jerry Erickson. Hathaway spent some of his time at the Willow Springs Raceway in Rosamond, California competing in supersport motorcycle racing, and designing and riding "chopper" motorcycles.

He was on tour with WizardWorld Conventions and appeared at the Chicago and Philadelphia shows in 2011. He appeared at the Supanova Pop Culture Expo in Sydney, Australia in June 2012.[6]

Report a problem
Write to Noah Hathaway at FanPal • 2022