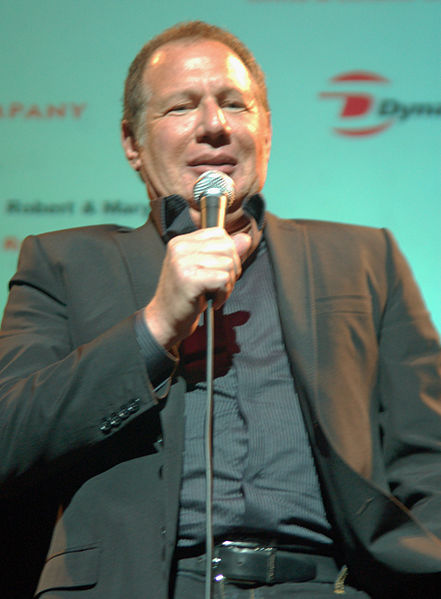 Garry Emmanuel Shandling (November 29, 1949 - March 24, 2016) was an American stand-up comedian, actor, director, writer, and producer. He was best known for his work in It's Garry Shandling's Show and The Larry Sanders Show.

Shandling began his career writing for sitcoms, such as Sanford and Son and Welcome Back, Kotter. He made a successful stand-up performance on The Tonight Show Starring Johnny Carson and became a frequent guest-host on the series. Shandling was for a time considered the leading contender to replace Johnny Carson (other hopefuls were Joan Rivers, David Letterman, and David Brenner). In 1986, he created It's Garry Shandling's Show for Showtime. It was nominated for four Emmy Awards (including one for Shandling) and lasted until 1990. His second show titled The Larry Sanders Show, which began airing on HBO in 1992, was even more successful. Shandling was nominated for 18 Emmy Awards for the show and won the Primetime Emmy Award for Outstanding Writing for a Comedy Series in 1998, along with Peter Tolan, for writing the series finale. In film, he had a recurring role in the Marvel Cinematic Universe, appearing in Iron Man 2 and Captain America: The Winter Soldier. He also lent his voice to Verne the turtle in Over the Hedge. Shandling's final performance was as the voice of Ikki in the live-action remake of The Jungle Book.

Shandling was born Garry Emmanuel Shandling in Chicago, Illinois,[2] on November 29, 1949[3] to a Jewish family. He grew up in Tucson, Arizona, one of two sons of Irving Shandling (1919-1985), who owned Shandling Lithographic, an art and academic print shop,[4][5][6] and Muriel Estelle (née Singer) (1922-2011), proprietor of Muriel Shandling's Animal Fair, a pet store,[7][8][9][10][11][12] with paternal grandparents Jacob Shandling, Anna Dodge from Russia and maternal grandparents Charles Singer from New York, and Aida Goovitsh from London.

After graduation from Palo Verde High School,[9] he attended the University of Arizona in Tucson, majoring in electrical engineering for three years. One day after leaving a laboratory class for a drink of water, he couldn't bear rejoining the class.[27][16] He eventually completed a degree in marketing and pursued a year of postgraduate studies in creative writing,[28] and contributed humorous articles to small magazines.[16]

At 19, he drove two hours to a club in Phoenix, where he showed some jokes to George Carlin, who was appearing. The next day, on a repeat round-trip, Carlin told him that he had funny stuff on every page and should keep at it.[29][16][30][31]

In 1973, Shandling moved to Los Angeles. He worked at an advertising agency for a time, took a script-writing class, wrote a speculative script with the son of a script writer, and then sold a script for the popular NBC sitcom Sanford and Son.[32] In addition to Sanford and Son, Shandling wrote scripts for the sitcoms Welcome Back, Kotter and attended a story meeting for Three's Company.[33]

In 1977, Shandling was involved in an auto accident in Beverly Hills that left him in critical condition for two days and hospitalized for two weeks with a crushed spleen.[2] During his hospital stay he had a life changing near death experience. Shandling stated, "I had a vivid near-death experience that involved a voice asking, "Do you want to continue leading Garry Shandling's life?" Without thinking, I said, "Yes." Since then, I've been stuck living in the physical world while knowing, without a doubt, that there's something much more meaningful within it all. That realization is what drives my life and work."[35] That accident inspired him to pursue a career as a comedian,[36] and he later turned the accident into part of his comedy.[17]

Shandling became a stand-up comedian because, one day at a story meeting for "Three's Company," one of the producers complained, "Well, Chrissie wouldn't say that."[37][38]

I just locked, I said, 'I don't think I can do this.' And I stopped right there and went on to perform.

In 1978, Shandling performed his first stand-up routine at the Comedy Store in Los Angeles. A year later, Shandling was one of the few performers to cross the picket line when a group of comedians organized a boycott against the Comedy Store, protesting owner Mitzi Shore's policy of not paying comedians to perform. According to William Knoedelseder, Shandling "was the scion of a family with ... decidedly antiunion views. He had not shared the struggling comic experience. He was a successful sitcom writer trying to break into stand-up, and prior to the strike, Shore had refused to put him in the regular lineup because she didn't think he was good enough. Of course, that changed the minute he crossed the picket line."[40]

His persona was an anxiety-ridden, grimacing, guarded, confused man on the verge of losing control.[41] After a couple of years on the road, a talent scout from The Tonight Show Starring Johnny Carson booked him to appear as a guest in 1981. Shandling substituted for Carson on a regular basis until 1987,[32] when he left to focus on his cable show leaving Jay Leno as permanent guest host and Carson's eventual successor.[citation needed]

In 1985, Shandling and Alan Zweibel went on to create It's Garry Shandling's Show. Through 1990, it ran for 72 episodes on Showtime. The edited reruns played on the Fox network beginning in 1988.[45] Shandling wrote 15 episodes of the series.

The series subverted the standard sitcom format by having its characters openly acknowledge that they were all part of a television series. Building on a concept that harked back to The George Burns and Gracie Allen Show, in which George Burns would frequently break the "fourth wall" and speak directly to the audience, Shandling's series went so far as to incorporate the audience and elements of the studio itself into the storylines, calling attention to the artifice of the show.[28][45][46]

The series was nominated for four Emmy Awards,[28] including one for Shandling. He won an American Comedy Award for Funniest Male Performance in a Series, and won four CableACE awards, two for Best Comedy Series. The show also won an award for Outstanding Achievement in Comedy from the Television Critics Association.[47]

Shandling during the 1994 Emmy Awards rehearsals

In 1992, Shandling launched another critical and commercial success by creating the mock behind-the-scenes talk show sitcom The Larry Sanders Show. It was inspired by the second episode of the fourth season of "It's Garry Shandling's Show", "Take My Wife, for Example".[16] It ran for 89 episodes through to 1998 on HBO. It garnered 56 Emmy Award nominations and three wins. Shandling based the series on his experiences guest hosting The Tonight Show Starring Johnny Carson.[48]

In 1993, NBC offered Shandling $5 million to take over Late Night when David Letterman announced his highly publicized move to CBS, but Shandling declined.[28][49] He was subsequently offered The Late Late Show, but also declined in favor of continuing The Larry Sanders Show.[28]

Shandling wrote 38 episodes of the series and directed three in the series' final season. He was nominated for 18 Emmy Awards for the series;[28] five for acting, seven for writing, and six for being co-executive producer with Brad Grey.[36] He won one Emmy Award for Outstanding Writing in a Comedy Series for the series finale "Flip." He has also been nominated for two Golden Globe Awards for Best Actor (Musical or Comedy) in 1994 and 1995. He won two American Comedy Awards for Funniest Male Performance in a Comedy Series, eight CableACE Awards, and a BAFTA Award.[32] The series also influenced other shows, such as Entourage, 30 Rock, and Curb Your Enthusiasm, in which guest stars portray themselves in episodes of the series.[50]

In 2002, TV Guide named The Larry Sanders Show as 38th Greatest Show of All Time. In 2008, Entertainment Weekly ranked the series the 28th Best Show of the past 25 years. It was also included on Time magazine's 100 Greatest Shows of All Time.[citation needed]

The first season was re-released in 2007, along with a Not Just the Best of the Larry Sanders Show, which were Shandling's pick of the best 23 episodes.[51]

Shandling at the 1992 Emmy Awards

In October 1999, Shandling, along with David Rensin, published Confessions of a Late Night Talk Show Host: The Autobiography of Larry Sanders, written in the voice of his alter-ego Larry Sanders.[54]

He also appeared in a brief cameo in Zoolander (2001). Again voicing an animal, Shandling co-starred as Verne in Over the Hedge (2006), which went on to become one of his best known roles.[55] He appeared in Iron Man 2 (2010) as Senator Stern and reprised the role in Captain America: The Winter Soldier (2014). He appeared in an uncredited cameo as a health inspector in The Dictator (2012).

He starred as himself representing Fox Mulder, alongside Téa Leoni as Dana Scully in the The X-Files season 7 spoof episode "Hollywood A.D."[81]

In February 2010, Shandling was staying at the same Waipio Valley hotel that Conan O'Brien checked in to after his departure from The Tonight Show and spent the entire vacation together, Shandling helping to rehabilitate O'Brien.[82][83][84][85][86]

In January 2016, Shandling was the featured guest on two different online shows. On January 13, Shandling appeared on episode 299 of the podcast You Made It Weird with Pete Holmes,[87] which ran for over 2 hours and displayed many deeper, spiritual sides to Shandling, along with much spontaneous humor.[original research?] Just a week later, on January 20, Comedians in Cars Getting Coffee with Jerry Seinfeld debuted the now-poignantly titled episode "It's Great That Garry Shandling Is Still Alive."[88][89]

Shandling was unmarried and childless.[90] He revealed little about his personal life. He shared an apartment with his fiancée Linda Doucett from 1987 until 1994; on The Larry Sanders Show, Doucett portrayed Darlene, Hank Kingsley's doting assistant.[91] Shandling dated Sharon Stone[92] and reportedly dated Calista Flockhart.[93][94][95]

In 1994, when Shandling and his fiancée Linda Doucett ended their relationship, Shandling had her dismissed from The Larry Sanders Show. Doucett filed a lawsuit against Shandling and Brad Grey's production company, Brillstein Entertainment Partners, for sexual harassment and wrongful termination. The case was settled out of court in 1997 for $1 million.[113][114]

Shandling won two British Comedy Awards,[115] twelve CableACE Awards[116] (including eight for The Larry Sanders Show and four for It's Garry Shandling's Show), a BAFTA Award[115] and was nominated for two Writers Guild of America Awards for The Larry Sanders Show. He received three American Comedy Awards,[116] two Satellite Award nominations,[117] and in 2004, he was presented with the Austin Film Festival's Outstanding Television Writer Award.[118]

Shandling suffered from hyperparathyroidism, a condition that can be fatal.[119][120]

On March 24, 2016, Shandling died in his home in Los Angeles, California, at age 66. The Los Angeles Police Department reported that he suddenly collapsed in his home and was rushed to a hospital,[121][122] suffering from an apparent medical emergency. By the time the paramedics arrived, Shandling was unconscious. The autopsy showed that he died from a pulmonary embolism.[123]

Shandling at the 39th Primetime Emmy Awards in 1987

Report a problem
Biography of Garry Shandling at FanPal • 2022