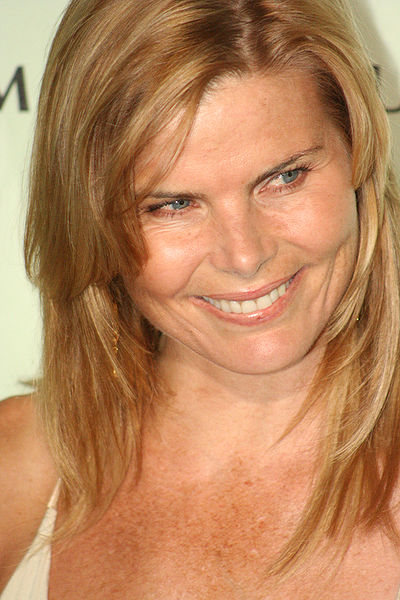 Mariel Hadley Hemingway (born November 22, 1961) is an American actress. She began acting at age 14 with a Golden Globe-nominated breakout role in Lipstick (1976), and received Academy and BAFTA Award nominations for her performance in Woody Allen's Manhattan (1979).

She is also known for her leading roles in Personal Best (1982) and Star 80 (1983), as well as in the TV series Civil Wars, for which she received a Golden Globe nomination. Amid mental health struggles, Hemingway's career dwindled in the 1990s. She has also starred in and co-produced videos about yoga and holistic living. She published a memoir, Finding My Balance, in 2002, and another, Out Came the Sun, in 2015.

Her paternal grandparents were Hadley Richardson (1891-1979) and Nobel Prize-laureate novelist Ernest Hemingway (1899-1961), who committed suicide four months before she was born. She was named for the Cuban port of Mariel—her father and grandfather visited the village regularly to go fishing. Her middle name was her paternal grandmother's. Hemingway grew up primarily in Ketchum, Idaho, where her father lived, and where Ernest had spent time as a sportsman and writer before he died there of suicide.

Hemingway's first role was with her real-life sister Margaux (also in her debut role) in the film Lipstick (1976), in which they played sisters. She received notice for her acting and was nominated as "Best Newcomer" for the Golden Globe Award that year. Her highest profile role came with her role in Woody Allen's Manhattan (1979), a romantic comedy in which she plays Tracy, a high school student and Allen's lover. Just 16 during filming (in the film she is said to be 17), she was nominated for an Academy Award for Best Supporting Actress.[citation needed]

In her memoir, Out Came The Sun (2015), Hemingway alleged that Allen attempted to begin a sexual relationship with her shortly after filming was completed, when she had turned 18. Hemingway successfully resisted his advances.[3][4][5]

In Personal Best (1982), she played a bisexual track-and-field athlete in a film noted for some explicit (by mainstream standards) lesbian love scenes. In connection with Personal Best, she appeared in a nude pictorial in the April 1982 issue of Playboy and was on the cover.[citation needed]

She starred as Dorothy Stratten in Star 80 (1983), a film about the Playboy model's life and murder. Reports circulated for years that Hemingway had had her breasts enlarged to play the role of Stratten, but during a 2007 appearance on the late-night talk and variety show, Fashionably Late with Stacy London, she said she had had the surgery before Star 80. Her breast implants were removed years later after they had ruptured.[6]

She was also featured in Superman IV: The Quest for Peace (1987) as Lacy Warfield. Subsequently, released additional footage showed an expansion of her role. She also co-starred in the 1991-93 ABC series Civil Wars. She was cast as the female lead in Darren Star's CBS drama Central Park West for the 1995-96 season; however, the show fared poorly with both critics and viewers, and after 13 episodes Hemingway was told that the show wanted her to accept a huge pay cut and demotion to recurring character status. She quit the series, which only lasted eight more episodes before being cancelled. In 1996, she had a leading role in the British TV movie September, playing the wife of Michael York.[citation needed]

She has played a lesbian or bisexual woman in several films and television shows, including Personal Best, The Sex Monster, In Her Line of Fire, and episodes of the TV series Roseanne ("Don't Ask, Don't Tell" and "December Bride") and Crossing Jordan. Hemingway, however, is not gay. She has said she formed a "big connection with the gay and lesbian community" after Personal Best and enjoys taking roles in "cutting-edge" productions.[7]

She is currently the host of Spiritual Cinema,[citation needed] a monthly television show dedicated to spiritual films. She has begun hosting a series of yoga practice videos Yoga Now, with guru Rodney Yee.[8]

Hemingway worked on the documentary film Running from Crazy, directed by Barbara Kopple and produced by the Oprah Winfrey Network chronicling the Hemingway family's history of suicide, substance abuse and mental illness,[9] shown at the Sundance Film Festival in 2013. In October 2013, Hemingway received a humanitarian award from the San Diego Film Festival for her role in the documentary.[10]

Hemingway married Stephen Crisman. They separated in 2008 and divorced the following year.[11][12]

As of early 2011, Hemingway was romantically linked with former stuntman Bobby Williams, with whom she has co-authored several self-help books.[13] In April 2015, Williams was described as Hemingway's partner.[14] She practices Transcendental Meditation.[14][15]

In a 2013 television documentary film, Running from Crazy,[16] Hemingway, then 51, talked of her bouts with mental illness and her still lingering issues with her siblings.[17][18] She spoke of her family's struggles with alcoholism, mental illnesses and suicide. (In particular she mentioned how her sister Margaux's suicide continued to haunt her.)[17][18] She also made claims that her parents' marriage was abusive and unhappy, and about abusive incidents in her childhood.[a][17][18]