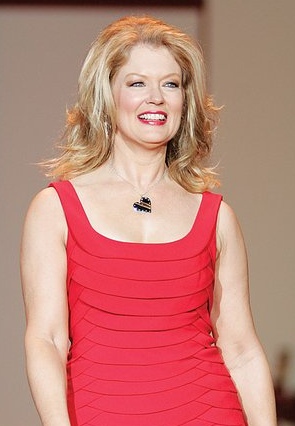 Mary Hart (born Mary Johanna Harum; November 8, 1950[1]) is an American television personality and was the long-running host (1982-2011) of the syndicated gossip and entertainment round-up program Entertainment Tonight, which is the longest running entertainment magazine show of all time.[2] She was also Miss South Dakota 1970.

Mary Johanna Harum was born in Madison, South Dakota[1] and lived in Sioux Falls, South Dakota, as well as in Denmark, as a child and teenager.[3] She speaks both Danish and Swedish fluently. Hart, who competed as Mary Harum when she was Miss South Dakota 1970, was a semi-finalist in the Miss America 1971 pageant.[4] In 1968, Hart graduated, first from Augustana Academy[5] and in 1972 from Augustana College in Sioux Falls.[6] While teaching English at Washington High School for two years,[6] she also produced and anchored her own talk show on KSFY-TV, the local NBC affiliate.[3]
Read more...

Hart began her full-time television career in 1975 at WMT-TV (currently KGAN) in Cedar Rapids, Iowa, then moving to KMTV in Omaha, Nebraska. In 1976, she went to KTVY (now KFOR-TV) in Oklahoma City, where she co-hosted a show with Danny Williams called Dannysday. She also was a sales representative for a school yearbook company. Determined to leave journalism behind, she moved to the Los Angeles neighborhood of Westwood in 1979 with $10,000 in the bank.[7] Hart landed a small role on the soap opera Days of Our Lives, as well as some TV commercials. Almost broke, she became a co-host on the Los Angeles version of the syndicated PM Magazine. That led to a job in 1981 as co-host of Regis Philbin's first national talk show on NBC. When that show was canceled four months later, Entertainment Tonight interviewed her about what it felt like to be canceled. The day after the interview, she was hired as an ET correspondent. Thirteen weeks later, she was named the show's co-host, along with Ron Hendren.[8]

In 1984, Hendren was replaced by Robb Weller, who was replaced by John Tesh in 1986, who was replaced by Bob Goen in 1996. Hart began co-hosting ET with Mark Steines in 2004.[7][9] Soon after her hiring by ET, Hart chose Jay Bernstein as her manager. Hart is known for her shapely legs, leading to an endorsement contract with Hanes for that company's line of pantyhose in 1987. Jay Bernstein had her legs insured with Lloyd's of London for $1 million each.[10][11] Executive Producer Linda Bell Blue described Hart as "the face of ET". On March 29, 1987 she participated in the World Wrestling Federation's WrestleMania III, serving as the guest timekeeper in the main event between Hulk Hogan and André the Giant.[12]

During the summer of 1988, Hart appeared in Las Vegas with comedian David Brenner at the Golden Nugget Hotel and Casino, which realized another of her childhood dreams, singing and dancing on stage. She continued her work on Entertainment Tonight while performing in Las Vegas, flying between the cities after two shows in Vegas, the last at 11:00PM, to film ET the following morning at 8:00AM.[13] In 1991, the New England Journal of Medicine reported that Hart's voice had triggered seizures in an epileptic woman.[14] This was later referenced in an episode of Tiny Toon Adventures[15] and the NBC sitcom Seinfeld, where Kramer (Michael Richards) suffers from convulsions whenever he hears Hart's voice. Hart has been parodied in Animaniacs in the character "Mary Heartless". She had also voiced a cartoon character named "Fairy Hart" in an episode of The Fairly OddParents where Bob Goen voiced "Bob Glimmer", and in The Fairly Oddparents TV movie, Fairly OddBaby.

In May 2009, Hart suffered a broken left wrist due to an accident at home (not due to any exotic activity, despite her jokes about it). While her wrist was healing, she wore various brightly colored slings designed to match or complement her wardrobe for each show. On August 5, 2010, Hart announced that she was leaving the show at the end of the upcoming 30th season, citing that she was ready for a change.[16] Hart's final episode aired on May 20, 2011—ending her 29-year history with the program.[17]

Mary is a recurring character on Baby Daddy, as a fictional version of herself, who hosts a morning show called "Mary is a Lady," and was Tucker's boss until mid-season 5.

On October 29, 2015, Hart made a guest appearance on ET, being interviewed by current host Nancy O'Dell; her appearance was meant to kick off a month-long celebration of the program's 35th season.[18]

Hart resided in the Trousdale Estates neighborhood of Beverly Hills, California, with her film-producer husband, Burt Sugarman.[19] before moving to a condo in the Ritz-Carlton Residences at L.A. Live in downtown Los Angeles[20][21] and later, to Sierra Towers in 2015. They married in a private ceremony aboard a yacht in 1989[22] and have one son, Alec "AJ" Sugarman (born 1991).

Hart has converted to Judaism, her husband's faith.[citation needed]

Hart owns two mansions in Montana.[23] One is a 7,000-square-foot home on 160-acres. Both homes are located within the Yellowstone Club residential community.[23][24] Since 2000, Hart has also had a home in Palm Desert, California[25] where she has supported local charities.[26]

She is a fan of the Los Angeles Dodgers and has performed the national anthem prior to games on several occasions.[27][28] She can often be seen, from the centerfield camera, behind home plate at Dodger Stadium.[29][30]

As co-chair of the New Hospital Building Campaign Committee for Children's Hospital Los Angeles, she helped pave the way for the opening of the new hospital building in July 2011. She has been a member of the Board of Trustees since 2003.[31]

In February 2011, she became godmother of the Oceania cruise line's newest ship, Marina.

On August 17, 2011, Hart was announced as the official spokeswoman for Edith Sanford Breast Cancer Initiative.[32]