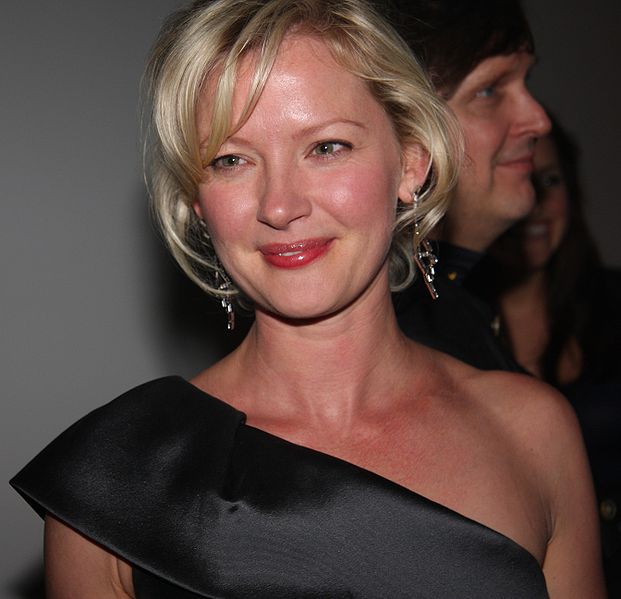 Gretchen Mol (born November 8, 1972) is an American actress and former model. She is known for her roles in the films Rounders, Celebrity, 3:10 to Yuma, The Thirteenth Floor, and The Notorious Bettie Page, in which she played the title character. She also appeared as Gillian Darmody in HBO's Boardwalk Empire.

Mol was born in Deep River, Connecticut, where her mother, Janet (née Morgan), is an artist and teacher, and her father was a school teacher at RHAM.[1][2] She went to high school with Broadway actor Peter Lockyer, with whom she performed in school musicals and plays. Her brother, Jim Mol, is a director and editor in the film industry. Mol attended The American Musical and Dramatic Academy and graduated from the William Esper Studio. After summer stock in Vermont, she took a job for a while as an usher at Angelika Film Center. She was living in a Hell's Kitchen walk-up when she was noticed by a talent agent who spotted her working as a hat-check girl at Michael's Restaurant in New York.[3]
Read more...

Mol's acting career began in summer stock theatre in Vermont where she played a variety of roles, including Godspell and 110 in the Shade.[3] She played Jenny in Neil LaBute's The Shape of Things on stage in both London and New York in 2001,[4] in a role she reprised in the film version, released in 2003. The New York Times critic Ben Brantley, in his review of the play (which he disliked),[5] wrote, " gives by far the most persuasive performance as the unworldly Jenny, and you wind up feeling for her disproportionately, only because she seems to be entirely there, in the present tense". In 2004, Mol spent a year singing and dancing as Roxie Hart in the Broadway production of Chicago. In 2014-2015, Mol played the role of Emily in the Broadway debut of Ayad Akhtar's Pulitzer-Prize-winning play Disgraced.[6]

In 1994, Mol was spotted by photographer David William Powell.[7] He photographed her in New York's Central Park and replaced her unrepresentative portfolio with professional-looking black-and-white images which landed her on the cover of W within weeks, and foreshadowed her "It Girl" and "Bettie Page" looks. Shortly afterwards, she ended her brief modeling career and entered acting full time.

While major roles have been sporadic, Mol has been in more than 30 feature films. She made her film debut in Spike Lee's 1996 film, Girl 6. She said, "I was auditioning for Guiding Light and I was happy I got a Spike-Lee movie, which was a tiny part, but all of a sudden I had Spike Lee on my resume. I didn't audition for day player anymore".[3]

After Girl 6, New York filmmaker Abel Ferrara took notice and cast her in two movies, The Funeral (1996) and New Rose Hotel (1998). She had a small role in Donnie Brasco (1997), but by now, she was being typecast as "the girlfriend", which she attempted to change by taking a role opposite Jude Law in Music from Another Room (1998), a romantic comedy. The film went virtually unnoticed by critics and audiences.[8]

In 1998, she appeared in several notable films, including Rounders, starring Matt Damon and Woody Allen's Celebrity opposite Leonardo DiCaprio. In 1998, she also came to prominence when she was featured on the cover of Vanity Fair, dubbed the "It Girl of the Nineties" by the magazine.

For her second film with Woody Allen, 1999's Sweet and Lowdown, she played a minor role which the Greenwich Village Gazette called "notable".[9] She played the female lead role in the 1999 film The Thirteenth Floor. She played the victim of a con artist in the 2003 film, Heavy Put-Away, based on the Terry Southern story. In 2006, she shared the lead in a romantic comedy, Puccini for Beginners, in which her character has a lesbian affair.

Mol worked with Mary Harron for two years as the director struggled to finance The Notorious Bettie Page: "I kind of felt like I lived with it for a while; certainly not as long as Mary Harron did but I got a good chance to really feel like I knew something about Bettie so by the time the role was mine and I was on set, I was pretty confident. I felt like I really worked for it."[10]

The next year, 2007, was one of her busiest, with four films in production or in release, including a remake of 3:10 to Yuma starring Russell Crowe, and An American Affair, in which her character, Catherine Caswell, has an affair with John F. Kennedy. When released in February 2009, the film was harshly criticized by New York Times critic Stephen Holden, though he said that Mol's part was "quite well acted".[11]

In April 2008, she began filming Tenure in Philadelphia, working opposite Luke Wilson and Andrew Daly. Though it had received some good reviews after being screened at several film festivals, it was released direct-to-video in February 2010.[12]

Mol's first television work was in a Coca-Cola commercial. Mol had a small role of Maggie Tilton in the 1996 miniseries Dead Man's Walk, based on the Larry McMurtry novel. She also was in a few episodes of Spin City.[8] She was the star of the short-lived David E. Kelley series Girls Club (2002), a drama about three women lawyers. The series was not well received and it was cancelled after two episodes.

She appeared in two TV remakes of classic films: Picnic (2000), in the role of Madge Owens, and The Magnificent Ambersons as Lucy Morgan (2002). She made a Hallmark Hall of Fame television movie in January 2007, starring in The Valley of Light, a story set in post-World War II based on a novel by Terry Kay.[13] It was her second Hallmark production. She had a minor role in Calm at Sunset in 1996.[14]

She played Norah in The Memory Keeper's Daughter which aired in the U.S. on The Lifetime Channel in the U.S. in April 2008.[15]

She had a recurring role on HBO's Boardwalk Empire as Gillian Darmody, a showgirl at the Beaux Arts and mother to gangster Jimmy Darmody (played by Michael Pitt).[16]

In February 2018, she played attorney Sam Henessy in the Netflix series Seven Seconds. On April 18, 2018, Netflix confirmed the show would not have a second season, deeming it a limited series.

Interviewed by the Associated Press in Baltimore in December 2006, Mol commented about how she maintained her confidence as an actress: "It is an ongoing struggle. Confidence is something that sometimes you have and sometimes you don't. And the older you get, hopefully, the more you have some tools to at least fake it".[17]

She married film director Kip Williams on June 1, 2004. Their first child, Ptolemy John Williams, was born September 10, 2007. On February 17, 2011, Mol gave birth to their second child, daughter Winter Morgan Williams.[18] While raising Ptolemy, Mol has only taken jobs close to her home in New York City. "I told my agent I didn't want to work in L.A., even if it was the greatest job in the world. I didn't want to compromise."[19]

Mol serves as the national spokesperson in the United States for the PMD Foundation, which funds research and awareness of Pelizaeus-Merzbacher disease, a neurological disorder which affects children worldwide. Mol became involved with PMD after one of her cousins died from amyotrophic lateral sclerosis (familiarly known as "Lou Gehrig's Disease").[20]