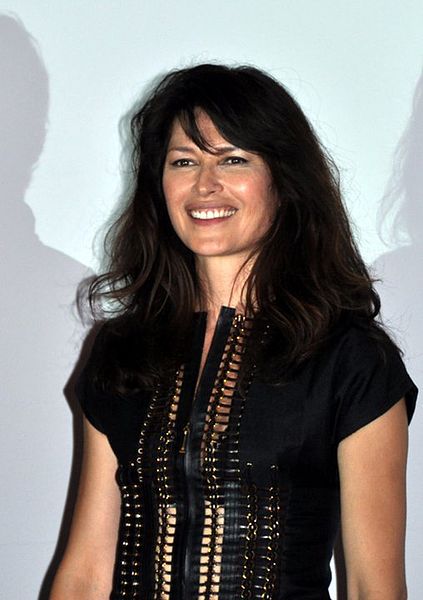 Karina Lombard (born January 21, 1969) is a French-American actress and singer. She has appeared in projects such as the Showtime series The L Word, The 4400, Rescue Me, and Legends of the Fall.

Karina Lombard was born in Tahiti, the youngest of five children. Her four older siblings are named Helene, Ines, Charles and Denise. Her mother, Nupuree Lightfoot, is a Lakota member and medicine woman. Her father, Henri Lombard, is of Swiss-Russian and Italian descent. Karina lived all over Europe as a child, including in Spain for a period of time, with her father and siblings.[1][2] Spanish was her first language. Lombard stated, "I was in and out of Switzerland. We moved around a lot, but I did most of my schooling in Switzerland."[3]

Lombard attended multiple boarding schools and is proficient in Spanish, English, Italian, French and German.[4] She moved to New York City at the age of 18 and began modeling and acting.

Lombard's major break in modeling was a Calvin Klein photo shoot with a Native American theme. One of her photographs was chosen for a billboard. Photographs of her as a model appeared in Elle and Vogue.[4]

She studied acting in New York City, where she also gained stage experience. She studied at the Lee Strasberg Theatre Institute and the Actors Studio, and performed also at New York City's Gallery Theatre and the Neighborhood Playhouse.

Lombard's first film role was as a princess in L'île (The Island).[4] She played her first major role as Antoinette Cosway, a Jamaican heiress, in Wide Sargasso Sea in 1993, based on the novel of the same name by Jean Rhys. She had a supporting part that year in The Firm.

Lombard appeared in the 1994 film Legends of the Fall, based on the novel by Jim Harrison. She starred in Last Man Standing with Bruce Willis in 1996.[4]

In the 2000s Lombard moved into television, appearing in The 4400 and on the first season of The L Word, as restaurateur Marina Ferrer. She portrayed the recurring character Geneviève on FX's Rescue Me. In November 2016, Lombard portrayed Shawnee chief Nonhelema in the episode "Stranded" of the NBC TV series Timeless.[5]